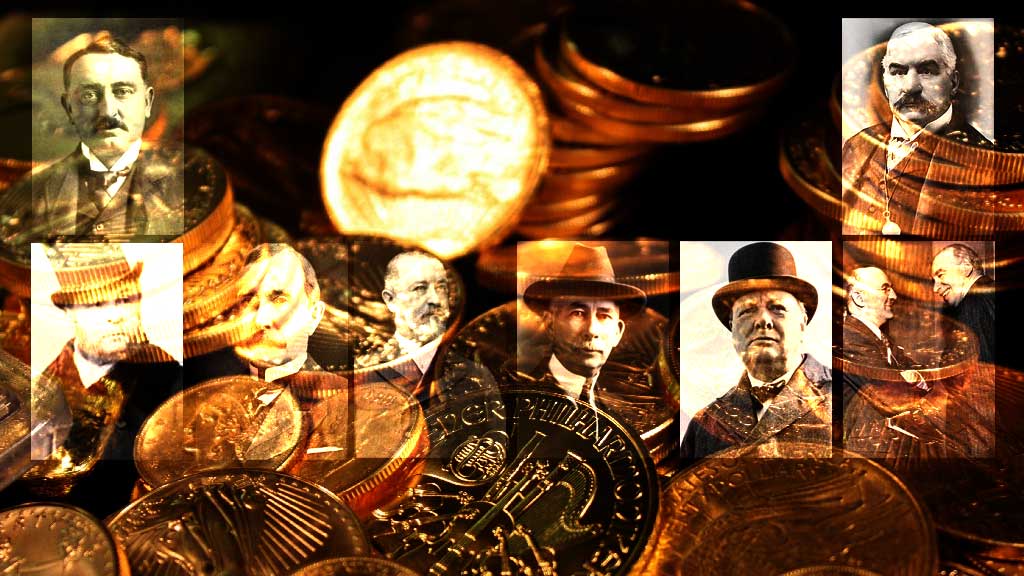 The business of banking in Europe in the fourteenth century function was to evaluate, exchange, and safeguard people’s coins. In the beginning, there were notable examples of totally honest banks which operated with remarkable efficiency considering the vast variety of coinage they handled.

These first banks also issued paper receipts which were so dependable they freely circulated as money and cheated no one in the process. As these things go honesty never last long. The last two honorable banks who tried to survive were the bank of Amsterdam and the bank of Hamburg. For over two centuries the bank of Hamburg faithfully adhered to the principle of safe deposit.

In 1941 Marriner Eccles was the Governor of the Federal Reserve System. On september 30 1941, the United States House of Representatives asked Eccles to give testimony regarding the role of the Federal Reserve in creating the depression of the 1930’s. Congressman Wright Patman, who was chairman of that committee, asked how the Fed got the money to purchase 2 billion dollars worth of government bonds in 1933.

This is the exchange that followed:

Eccles: We created it.
Patman: Out of what?
Eccles: Out of the right to issue credit money.
Patman: And there is nothing behind it, is there, except our government’s credit?
Eccles: That is what our money system is. If there were no debts in our money system, there wouldn’t be any money.

This means that our money now-a-days is a classic example of fiat money with no limit to the quantity that can be produced. And it has no intristic value at all. Specially, its primary value lies in the willingness of people to accept it and, to that end, legal tender laws require them to do so. It is certainly true that our money is created out of nothing, but it is more accurate to say that it is based upon debt. Accordingly, in one sense, our money is created out of LESS than nothing. And as a result the entire money supply would vanish into bank vaults and computer chips if all debts were repaid.

As follows, under the present system, our political leaders cannot allow a serious reduction in either the national or consumer debt. And above all, charging interest on pretended loans is usury. Which became institutionalized under the Central Bank system.

Mr. Griffin calls this mechanism in his book, the Mandrake Mechanism after a comic strip character named Mandrake. This Mandrake is a magician who can create things out of nothing and let them disappear again at will. The Central Bank converts debt into money. This may seem complicated at first, but it is quite simple. To understand the principle, you only need to remember that this process is not intended to be logical but intended to be confusing and deceiving. Moreover, the end product of this Mechanism is the artificial expansion of the money supply. Which is the root cause of the hidden tax collection, called inflation.

This expansion then leads to contraction. Together, they produce the destructive boom-bust cycle that has plagued mankind throughout history whenever fiat money has existed. This means that our modern money is just a grand illusion conjured by the magicians of finance and politics. We are living in an age of fiat money. Thus it is very sobering to realize that every previous nation in history that has adopted such fiat money eventually was economically destroyed by it.

A good readinglist and in depth explanations are the works of Griffin, “the creature from Jekyll Island”
– “A hidden history – the secret origins of the first world war ” by Docherty & Macgregor,
(https://www.maier-files.com/hidden-history/)
”Tragedy and Hope” by Quigley. Prof. Quigley wrote accurately how an international network of financiers has created a system of financial control able to dominate the political systems of all countries through their central banks, and of course the eye opening books of Alexander Del Mar.

made one of the world’s greatest fortunes of the 18th century. Financed by Nathan Rothschild and the Bank of England, he established a monopoly over the diamond output of South Africa and most of the gold as well. He was one of the initiators of the horrible Boer war and laid the foundation and the planning for the first world war.

He formed a secret society which included many of the top leaders of British government. Their elitist goal was nothing less than world domination and the establishment of modern feudalist society controlled by themselves through the world’s central banks. In America, the Council of Foreign Relations (CFR) was an outgrowth of that group.

he came to New York in 1837 as the financial agent of the Rothschilds. He funneled vast amounts of capital into American investments, often without anyone knowing whose money he was spending. The purpose of concealment was to blunt the growing anti-Rothschild resentment that was then prevalent in Europe as well as America. When his affiliation became commonly known his usefulness came to an end and he was replaced by J.P. Morgan.

was brought into banking by his father, Junius Morgan in England. The Morgans were friendly competitors with the Rothschilds and became socially close to them. Morgan’s London based firm was saved from financial ruin in 1857 by the bank of England over which the Rothschilds held a great influence. Thereafter, Morgan appears to have serve as a Rothschild financial agent and went to great length to appear totally American.

made his initial fortune in oil but soon gravitated into banking and finance. His entry into the field was not welcomed by Morgan, and they became fierce competitors. Eventually, they decided to minimize their competition by entering into joint ventures. In the end, they worked together to create a national banking cartel called the Federal Reserve System.

was head of the New York investment firm, Kuhn, Loeb & Co. He was one of the principal backers of the Bolshevik revolution and personally financed Trotsky’s trip from New York to Russia. He was a major contributor to Woodrow Wilson’s presidential campaign and an advocate for passage of the Federal Reserve Act.

the theoreticians who guided the 1944 Bretton Woods Monetary Conference at which the IMF/World Bank was created. White was a member of the communist Party. Keynes was member of the Fabian Society.

was the man who secured Woodrow Wilson’s nomination for President and who, thereafter, became the hidden power at the White House. He negotiated a secret agreement to draw the U.S. into World War I at the very time Wilson was campaigning on the promise to keep America out of the war. On behalf of Wall Street, House lobbied Congress to pass the Federal Reserve Act.

became head of the American Red Cross Mission in Russia after the Bolshevik revolution. Although he represented Wall Street interests, he was a disciple of Cecil Rhodes and was “anti-capitalist” in his beliefs. He held great influence over Lenin.

was the First Lord of the Admiralty in World War I.  As the Lusitania entered into an area where a German U-boat was known to be operating, he called off the destroyer escort that had been assigned to protect her. He calculated that the destruction of a British ship with U.S. passengers aboard would inflame American passions against Germany and help create a political climate for coming into war.

was put in charge of an official inquiry into the sinking of the Lusitania. But his was not an investigation but a cover-up. In other words, he was instructed by the Admiralty to place the entire blame on the Captain of the ship. Of course Mersey obeyed his orders but refused payment for his services and declined to accept further judicial assignments. In later years, he said the affair “Was a damn dirty business.”

src. Creature of Jekyll Island (A must read)