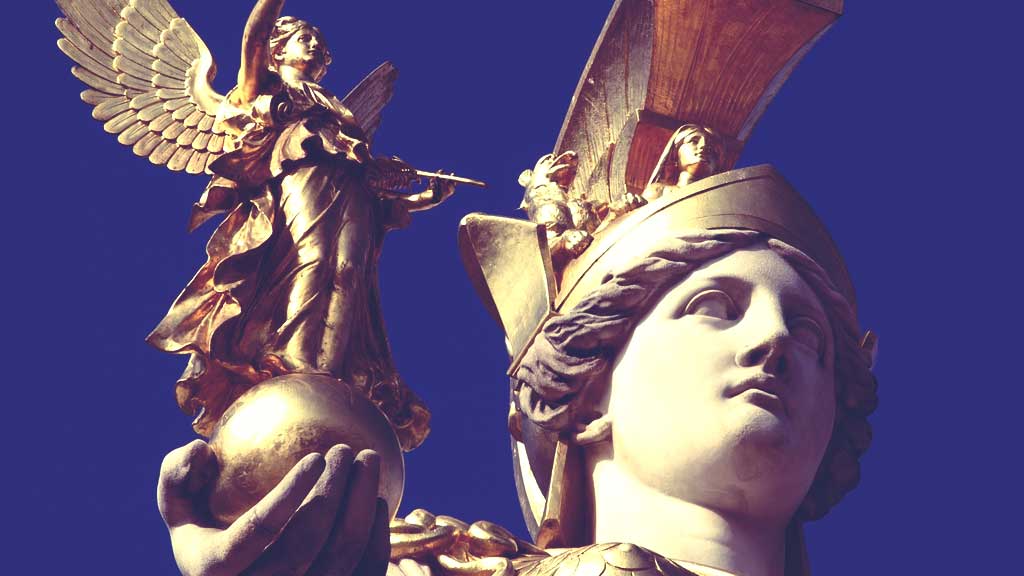 Legend tells us that one day Ilias, founder of the city of Troy, was asleep and had an extraordinary dream that the gods were communicating with him. When he woke up he found nearby a statue of a woman holding a shield and carrying a spear. It was the sacred statue of Pallas Athena, the Palladium.

We know from Plutarch that in antiquity Isis was identified with Athena, the Greek goddess of Wisdom. Athena got a half-sister, a dark-skinned gal called Pallas, whom she treasured more than anyone. Carefree, they used to play on the plains of Anatolia – wrestling, running games,  mock battles with spears and shields. But one day Athena was distracted. She slipped and unintentionally speared Pallas to death. From then on she called herself Pallas Athena, to acknowledge the dark side of herself, just as in a sense Nepthys represents the dark side of Isis. Athena carved a statue of Pallas out of dark hardwood as a memorial to her.

This exceptional statue carved by the hands of the goddess and washed by her tears, was revered as an object of world-changing power in antiquity.When the people of Anatolia kept it in their capital, Troy was the greatest city in the world.  It was made out of wood, three cubits high, which, like the Kaaba in Mecca, had at its center a meteor that was believed to have fallen from heaven. This meteoric component is said to have conferred invulnerability upon the possessor of the Palladium. Buried in the depths below the city, guarded by virgins, the Palladium was the source of the power of the city of Troy. But Troy lost its invulnerability when Odysseus, disguised as a beggar, secretly entered the city and recaptured the meteoric component of the Palladium. By this act, Odysseus literally opened the door to the destruction of the city of Troy. 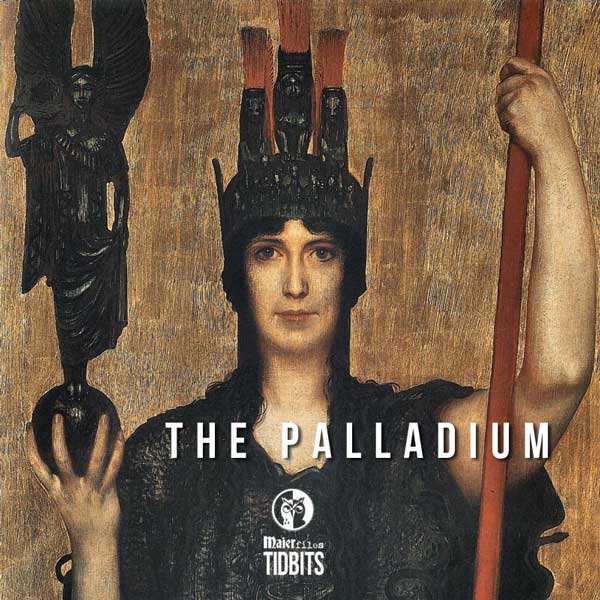 In the light of this Greek victory, it is somewhat of a surprise to learn that the Trojan priest Aeneas rescued the wooden statue of the Palladium from the flames and thus prevented it from falling into Greek hands. The travels of Aeneas, recorded in the Aeneid, tell us of the further destiny of the Palladium. After leaving Troy, Aeneas traveled around the Mediterranean and eventually came to the region of present-day Rome, where he married the daughter of the Roman king, Latinus.

And so the Palladium came to rest in Rome. As in Troy, a special temple was built for it beneath the city, guarded by vestal virgins. In this underground temple an eternally burning flame gave the city of Rome its power over the whole of the ancient world. The emperor Trajan (200 CE ) brought from Egypt a colossal porphyry pillar from the temple of Isis and had it placed above the underground temple of the Palladium.

In the fourth century CE, the emperor Constantine the Great heard the prophecy of the sibyls that the city of Rome would collapse and its power would be lost. In an attempt to secure the future of the Empire, he decided to transfer the capital from Rome to Constantinople, the city named after him, with the idea of creating an even greater empire embracing the East and the West. Constantine the Great carried out his bold plan and transferred the Palladium to Constantinople. Here he placed it once again in an underground temple guarded by vestal virgins. The colossal porphyry pillar from the temple of Isis was also transported to Constantinople and placed above the Palladium.

On top of the porphyry pillar from the temple of Isis the emperor Constantine had placed a golden statue of Apollo, but he had the face of Apollo made in his own likeness. A few centuries later lightning struck the statue and destroyed half the pillar. The rest of it still stands to the present day in the city of Istanbul, the current name for Constantinople.

And, it is said, the Palladium is still buried beneath this pillar. The meteor from the Palladium was taken by Odysseus to Greece but in the early twentieth century some followers of Rudolf Steiner went to Istanbul and began excavations there to locate the Palladium, but without success. According to legend, the Palladium will one day be recovered and transferred to a Slavic kingdom in the north, to Russia. It is said, there will be a new culture, of which present-day Russia is the first sign—a culture that will blossom and flourish under the inspiration the Divine Sophia.

A similar freemasonic legend tells us the statue is to be hidden somewhere in Eastern Europe, which is why in recent times, the great powers, the Freemasonic ones, have sought to control this region.