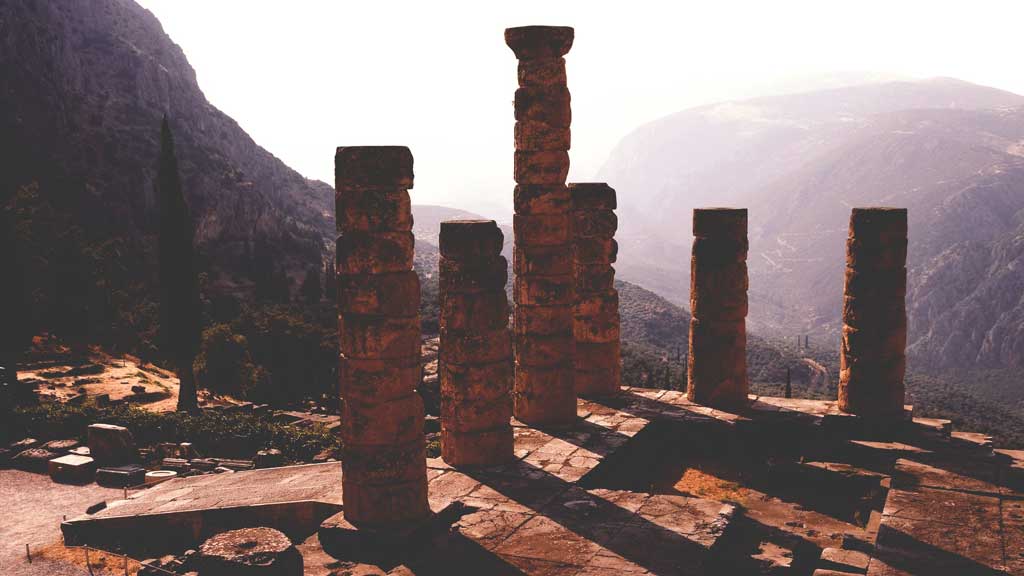 For centuries, the Temple of Apollo at Delphi in central Greece contained the most prestigious oracle in the Graeco-Roman world, a favorite of public officials and individuals alike. The oracle was said to relay prophetic messages and words of counsel from Python, the wise serpent son of the Mother-goddess Delphyne or from the Moon-goddess Artemis through their priestess daughters, the Pythonesses or Pythia.

According to myth, the god Apollo murdered Delphyne and claimed the shrine and the Pythia for himself. He imprisoned the serpent seer in the recesses of a cave beneath the temple.

The historian Plutarch (c. 46–120 C.E.), author of Plutarch’s Lives, served for a time as high priest at the Delphic Oracle and explained why its oracles had remained popular while others had fallen into disrepute. In his opinion, the gods had declined to speak through the other oracles because their devotees had insulted them by asking too many blasphemous and trivial questions, such as advice concerning love affairs and disreputable business transactions.

Plutarch also described how the oracle worked. The priestess went into a small chamber called the adyton where she would inhale sweet-smelling fumes that issued from fissures in the rocks.

The fumes, supposedly released by the serpent deep within the cave, would place the Pythia in a trance that would allow her to see the future and to make predictions.

Predictions of the Pythia

Plutarch asserted that such trance states occasionally deepened into delerium, even death. While some researchers have touted the accuracy of the oracle at Delphi, other scholars have protested that the predictions of the Pythia were too often made in extremely ambiguous language, so that it could always be claimed that the petitioner had misinterpreted or misunderstood the true meaning of the prophecy.

An oft-cited example of such ambiguity concerns the wealthy and powerful Croesus (d. 546 B.C.E.), king of Lydia, who sought counsel regarding his plans to attack Cyrus the Great (c. 600–529 B.C.E.), king of Persia. The oracle told Croesus that if he went to war with Cyrus, he would thereby destroy a mighty kingdom. Encouraged by such a prophecy, Croesus went to war and was soundly defeated by the Persians.

The Greek king had fulfilled the prophecy by destroying his own kingdom. In response to his bitter complaint, the Pythia reminded him that their seership had been accurate. Croesus was told that he should have thought first to ask whose kingdom would be destroyed before he set about waging war against the Persians.

The Oracle at Delphi was a major religious site for 2,000 years until it was closed by the Christian emperor Theodosius I (346?–395). Later, Arcadius ordered the temple destroyed.

In the summer of 2001, Jelle de Boer of Wesleyan University in Connecticut and coworkers discovered a previously unknown geological fault passing through the sanctuary of the Temple of Apollo. According to de Boer, the fault crosses the previously known Delphi fault directly below the temple.

This crossing makes the bitumen-rich limestone much more permeable to gases and groundwater.

The researchers speculated that seismic activity on the faults could have heated such deposits, releasing light hydrocarbon gases, such as ethylene. Ethylene is a sweet-smelling gas that was once used in certain medical procedures as an anesthetic.

Although fatal if inhaled in large quantities for too long a period of time. In small doses ethylene stimulates the central nervous system and produces a sensation of euphoria and a floating feeling. According to Jelle de Boer, just what oracles need to prompt visions.