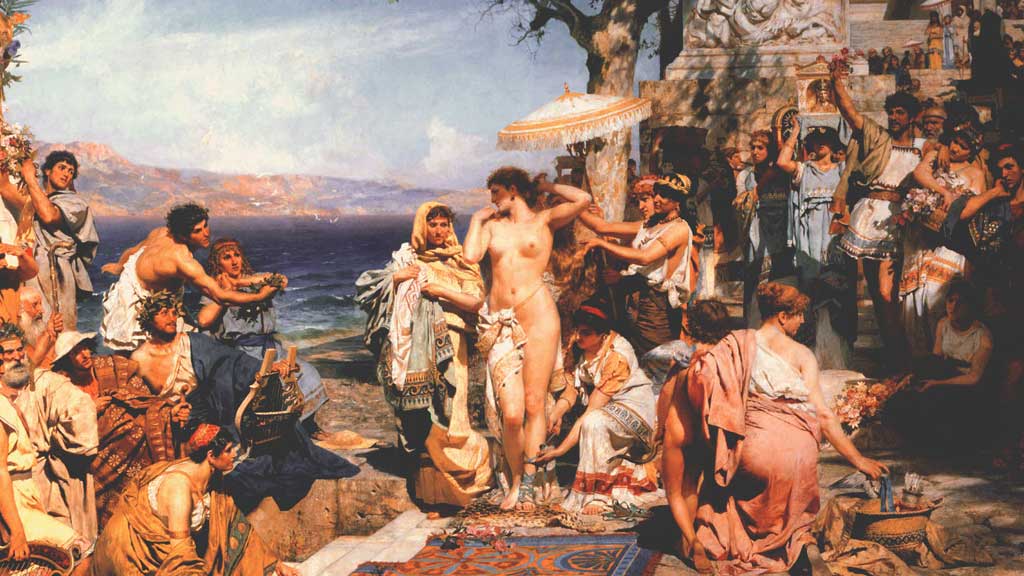 Eleusis and the Mystery Religions

Eleusis or the sacred Eleusinian mysteries of the Greeks date back to the fifth century BC and were the most popular and influential of the cults, and it has been said that nowhere did the ancient mysteries appear in such human, vital, and colorful form.

The cult of Eleusis centered around the myth of Demeter (Ceres), the great mother of agriculture and vegetation, and her daughter Persephone, queen of the Greek underworld, the original name of the goddess of death and regeneration. The drama enacted for the initiates symbolized the odyssey of the human soul, its descent into matter, its earthly sufferings, its terror in the darkness of death, and its rebirth into divine existence.

Life a series of tests

Some contemporary students of the mysteries have portrayed the myth as the story of the Fall of humankind and its Redemption as expressed in the religion of the Eleusinians. In the temples and in the groves where the mysteries were celebrated, the candidates were told that life was a series of tests and that after death would be revealed the hopes and joys of a glorious world beyond and the opportunity for rebirth.

The rites of the mysteries took place near Eleusis, a small community  west of Athens, but it was the ruler of Athens, together with a specially selected committee, who was in charge of the general management of the annual event. Although the Dionysian and Orphic rites could be celebrated at any time, the Eleusinian rites were held at a fixed time in the early fall after the seeds had been entrusted to the fields and were conducted by a hereditary priesthood called the Eumolpedie, the “singers of gracious melodies.”

Sometime in the month of September, the Eumolpedie removed the Eleusianian holy objects from Eleusis and carried them to the sacred city of Athens where they were placed in the Eleusinion. Three days after the holy relics had been transported, the initiates gathered to hear the exhortations of the priests, who solemnly warned all those who did not consider themselves worthy of initiation to leave at once.

Women and even slaves were permitted to join the mysteries of Eleusis, providing they were either Greeks or Romans, but it was required that all those wishing to be considered as initiates had first undergone the lesser mysteries held in Agrae, a suburb of Athens, six months before in March.

After the rites of purification had been observed, the initiates bathed in the sea and were sprinkled with the blood of pigs as they emerged. A sacrifice was offered to the gods, and a procession began the journey to Eleusis, where, upon the arrival of the priests, the initiates were received by the high priest of Eleusis, the hieroceryx, or sacred herald, who was dressed in a manner suggesting the god Hermes (Mercury), holding the caduceus, the entwined serpents, as a symbol of his authority.

Once the aspirants had assembled, the sacred herald led them to a sanctuary of the goddess Persephone hidden in a quiet valley in the midst of a sacred grove. Here, the priestesses of Persephone, crowned with narcissus wreaths, began chanting, warning the newcomers of the mysteries that they were about to perceive.

The initiates would learn that the present life that they held so dear was but a tapestry of illusion and confused dreams. After a stern admonition that the aspirants be careful not to desecrate the mysteries in any way lest the goddess Persephone pursue them forever, they were allowed to partake of food and drink. For the next several days, the initiates fasted and participated in cleansing rituals and prayers.

On the evening of the last day of the celebration of the mystery, the candidates gathered in the most secret area of the sacred grove to attend the Rape of Persephone. The Eleusinian drama reenacted the myth of the rape, abduction, and marriage of Persephone (Kore) by Hades, god of the underworld, and her separation from her mother, Demeter (Ceres), the goddess of grain and vegetation.

When, in her despair, Demeter refuses to allow the earth to bear fruit and causes a time of blight and starvation that threatens to bring about the extinction of both humans and the gods.

Zeus recalls Persephone from Hades. Filled with joy at the reunion with her daughter, Demeter once again allows the earth to bear fruit. Persephone, however, will now divide her time between her husband Hades in the underworld and her mother on Earth, ensuring a bountiful harvest.

Essentially, the rites imitated the agricultural cycles of planting the seed, nurturing its growth, and harvesting the grain, which, on the symbolical level, represented the birth of the soul, its journey through life, and its death.

As the seed of the harvest is planted again and the agricultural cycle is perpetuated, so is the soul harvested by the gods to be resurrected.

Membership in the mysteries of Eleusis was undertaken for the purpose of the initiates ensuring themselves a happy immortality. They returned to their customary occupations as mystics, ones who had been endowed with the ability to open their inner eyes to perceive a world of light beyond the darkness of their ordinary lives.