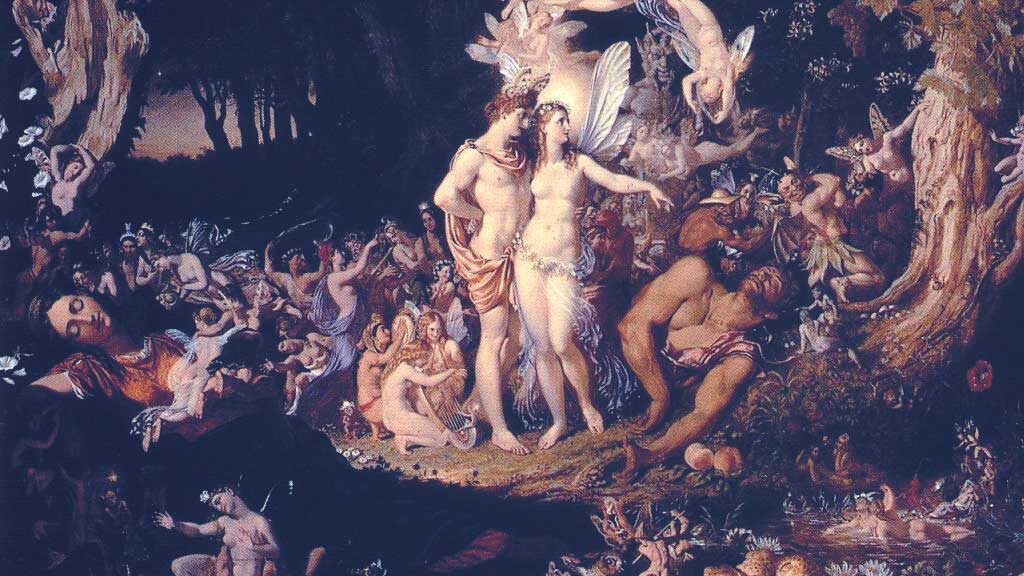 In the ancient french poem of Oberon, “Huon de Bordeaux,” which has strong similarities not only to Wolfram’s epic but also to the German legends of Ornit and Wolfdietrich, Esclarmonde is the wife of King Huon de Bordeaux. Supported by Oberon, the King of the Faeries, in his struggle with his rebellious brother, Huon promises that after three years he will visit Oberon at his castle in Monmur. When the three years have passed, Huon and Esclarmonde set off in a galley, praying to God to lead them safe and sound to Monmur. After months of odyssey through the pays des commans and the terre de foy, they arrive at the bocaige Auberon, the enchanted forest of Oberon. 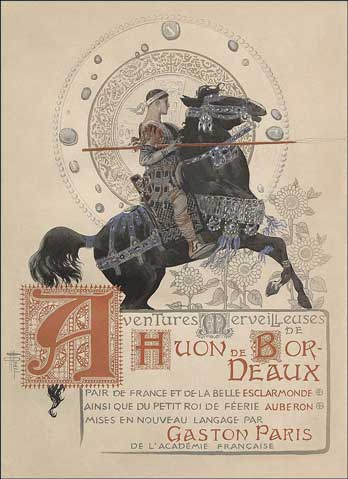 Castle of the strange monks

There, they find the “castle of the strange monks” where a magnificent banquet awaits them in a sumptuous hall—but to their surprise nobody is there to serve them.

The following morning, when Huon and Esclarmonde go to the church for mass, they discover that there is neither an altar nor a crucifix in the church. Then, as if by magic, a hundred monks suddenly pop out of the floor. Esclarmonde becomes apprehensive. Then Huon remembers that Oberon had recommended that he bring a long shawl with him. With it, he traps a large, horribly ugly monk, and together Huon and Esclarmonde manage to convince him to explain to them exactly what is going on in the castle. He tells them to continue their journey, because all the strange monks are really ghosts. When God banished Luzbel, he banished the monks to this place, where they await redemption on the final Judgment Day.

“Hope is the habit of this fraternity …”

The monk then takes Huon and Esclarmonde to Monmur on a magic carpet. According to another version of the ballad, the fisherman Mallabron, who transforms himself into a dolphin, takes them across a great expanse of water to Oberon’s castle. Although Oberon is awaiting death in Monmur, he has refused to die before Huon is elected King of the Elves. Oberon heartily welcomes Huon and Esclarmonde, and a party is organized where wine is served to all the guests from a marvelous cup.

After the banquet, Oberon asks that his crown and javelin, the symbols of his sovereignty over the empire of the faeries, be brought to him. Huon and Esclarmonde are then solemnly crowned sovereigns. The following morning, Huon, in a show of power, convokes all the faeries and barons of the kingdom. In front of the entire faery world brought together in a magical assembly, Oberon declares:

I cannot bear remaining any longer on Earth;
I want to go to heaven as soon as possible …

Oberon says farewell to the faery world and dies. His embalmed body is placed in his coffin, which is suspended in the air while a chorus of elves dance beneath it. Oberon’s mortal remains are finally buried in a huge cave. Of all the similarities between the “Song of Esclarmonde” of the Huon Cycle and the Grail poems (above all, Guyot and Wolfram’s versions), we will highlight only the most important and apparent links: The crown and the javelin correspond to the Grail and the blood lance. The magic cup plays the role of the Grail that distributes food. The Bocaige Auberon looks like the forest of Briciljan. Still more shocking is the similarity between the strange monks who await their freedom and the angels of Parzival:

When Lucifer and the Trinity began to war with each other,
Those who did not take sides, worthy, noble angels had to descend to Earth …
I do not know if God forgave them or damned them in the end.

Especially surprising are the analogies between Anfortas the fisherman on the shores of Lake Brumbane and the fisherman Mallabron beside a vast body of water, behind which is located Oberon’s Kingdom of the Faeries. Both Anfortas and Oberon suffer. Both consider that the arrival of their successor will be a moment of salvation …