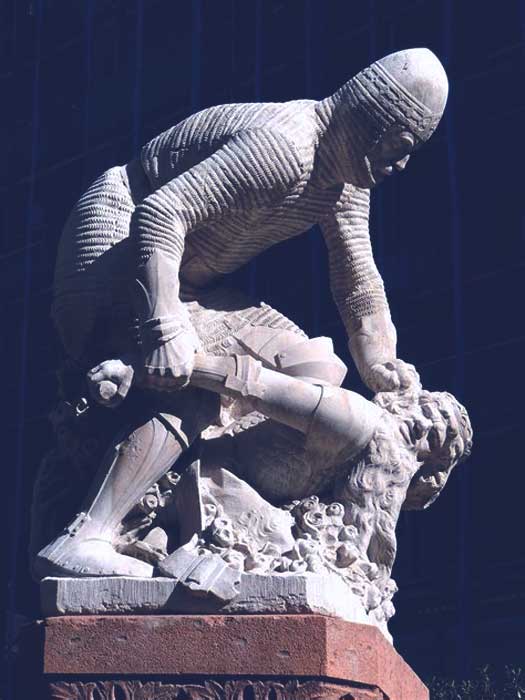 Laurin was probably one of the most popular poems concerning the knight called Dietrich and is attested in variety of manuscripts as well as in printed editions. It almost certainly originates in the 12th century in Tyrol, and has 4 major variations or versions. They all are written in rhyming couplets, except the Dresdner Laurin which is written in stanzas.

The earliest version of the story (the so-called elder Vulgate edition (ältere Vulgatversion)) starts with a dialogue between Witige and Hildebrand. Witige claims that Dietrich is the biggest hero ever; Hildebrand objects that Dietrich has not ever undergone a twergen-âventiure (dwarf-adventure).

At this point Dietrich walks in and is really angered by Hildebrand’s personal critique. Hildebrand conveys to Dietrich where he could find this sort of an adventure: the dwarf king Laurin has a rose-garden in the Tyrolian forest. He will battle any challenger who breaks the thread encircling his rose garden. Dietrich and Witige instantly set off to challenge Laurin; Hildebrand and also Dietleib follow sneakily behind. Upon seeing the stunning rose-garden, Dietrich relents and decides that he does not wish to destroy or harm anything so charming.

Witige, nonetheless, argues that Laurin’s pride must be punished, and not only breaks the strand, but tramples the whole rose garden. In next to no time the dwarf Laurin emerges, armed so splendidly that Witige mistakes him for the Archangel Michael. Laurin demands the left foot and right hand of Witige as punishment for the total devastation of the garden. He clashes and defeats Witige, but Dietrich then determines that he can not permit his vassal to lose his limbs, and fights Laurin personally.

At first, Dietrich is losing, but Hildebrand arrives and instructs Dietrich to grab the dwarf’s cloak of invisibility and strength-granting belt, then fight him on foot (the dwarf was riding a deer-sized horse) wrestling him to the ground. Laurin, now defeated, pleads for mercy, but Dietrich became enraged and vows to kill the dwarf. And lastly, Laurin turns to Dietleib, telling him he had kidnapped and married the hero’s sister, so that he was now Dietleib’s brother-in-law. Dietleib hides the dwarf and prepares to combat Dietrich, but Hildebrand makes peace between them.

Laurin ‘s Kingdom under the mountain

Dietrich and Laurin are reconciled, and Laurin invites the heroes to his kingdom under the mountain. All are enthusiastic except Witige, who senses treachery. In the mountain they are well received, and Dietleib meets his sister. She tells him she is being well treated and that Laurin has only one fault: he is not Christian. She wants to leave. Meanwhile, Laurin, after a feast, confides to Dietleib’s sister that he wishes to avenge himself on the heroes. She advises him to do so. He drugs Witige, Hildebrand, and Dietrich and throws them into a dungeon.

He tries to commit Dietleib to join his side, but locks him in a chamber when the hero refuses. Dietleib’s sister steals the stones that light the mountain and releases Dietleib. They then deliver weapons to the other heroes, and they begin a slaughter of all the dwarves in the mountain. In the end Laurin is taken as a jester back to Verona.

Depending different accounts he could liberate himself and return to his magical kingdom in some versions he became Dietrich’s friend. According to Wolfram von Eschenbach, Laurin confided to Dietrich von Bern: “You still have 50 years to live. Yet know that my brother at home in German lands is able to give a thousand-year life. You need only choose a mountain that is ablaze inside. Then you will be akin to earthly gods!”

A connection exists between the Laurin stories and a Tyrolian folk-story in which the rose garden is the source of the magical morning-glow on the Alps.  However, some researchers believe that, since this story is only attested from the 17th century onward, it is more likely to have been influenced by the text than the other way around. Others have attempted to connect the rose garden to a cult of the dead or with an ancestral cult. Similarities with Celtic inspired Arthurian romance (the rose garden as otherworld) have also been proposed.

The Large Rose Garden at Worms

Any which way there exists also a Large Rose Garden – Der große Rosengarten – (The Rose Garden at Worms). Der Rosengarten zu Worms is attested in numerous manuscript and printed copies from the early 14th century until the late 16th century. The story connects characters surrounding the legend of Dietrich von Bern with those of the Nibelungenlied, and is closely connected with the similar epic, Biterolf und Dietleib.

The basic outline of the story is this: Gibich is the lord of the rosegarden in Worms, and as Kriemhild’s father also father of the three Burgundian kings, Gibich dares any wooer to defeat the garden’s twelve guardians. Dietrich von Bern and Etzel, king of the Huns take up the challenge together. They travel to Worms with their retinue, and face each of the guardians in single combat. Among the guardians are giants, named Pusolt, Ortwin, Schrutan and Asprian. Dietrich von Bern fights and defeats Siegfried.

Except for one draw (Biterolf refuses to fight his kinsman Walther of Aquitaine), all fights end with Dietrich’s side victorious. Dietrich fights against Siegfried, initially doing poorly and complaining of Siegfried’s hardened skin. Hildebrand tells Wolfhart to falsely tell Dietrich of the tutors death, after which point Dietrich’s rage causing him to breathe fire like a devil and Hildebrand must intervene so that Dietrich does not kill Siegfried. Finally, Gibich has to submit to Dietrich and Etzel, and the victors are honoured with garlands of Roses and kisses from Kriemhilde.

The saga contains many narratives found in other medieval tales about Theoderic, but also supplements them with other narratives and provides many additional details. It is not clear how much of the source material might have been orally transmitted and how much the author may have had access to written poems. The preface of the text itself says that it was written according to “tales of German men” and “old German poetry“, possibly transmitted by Hanseatic merchants in Bergen.

Contrary to the historical reality of Theoderic’s life, most of the action of the saga is set in Northern Germany, situating Attila’s capital at Susat (Soest in Westphalia) and the battle situated in the medieval German poem Die Rabenschlacht in Ravenna taking place at the mouth of the Rhine. This is part of a process operative in oral traditions called “localization”, connecting events transmitted orally to familiar places, and is one of the reasons that the poems collected by the saga-writer are believed to be Low German in origin.

And remember: there’s always more than meets the eye!