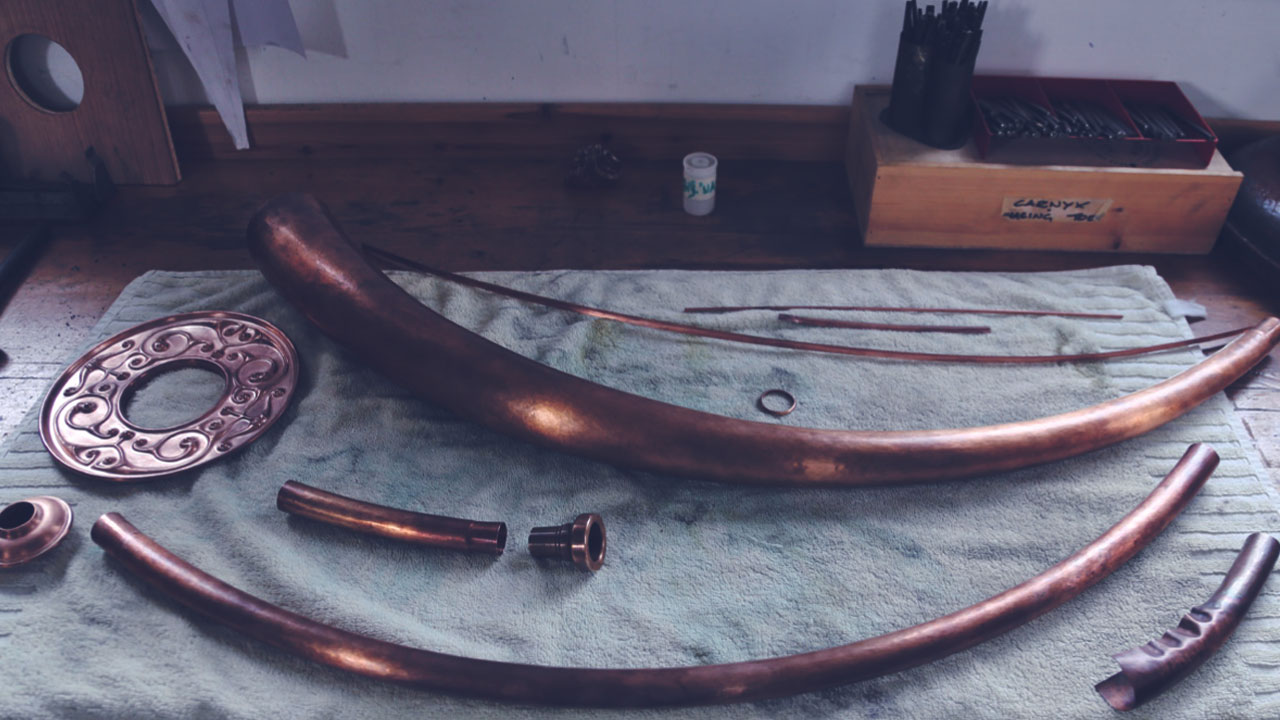 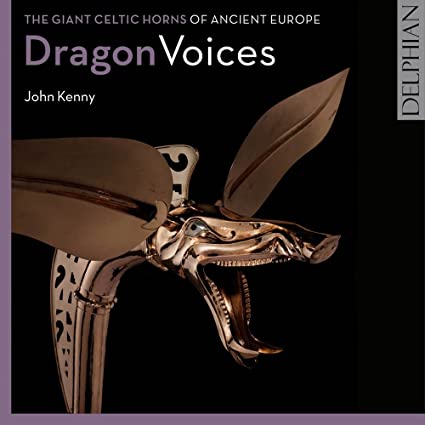 John Kenny ‘s fascinating CD “Dragon Voices.
Around 1990, John Purser – composer, musicologist, poet, playwright, broadcaster and passionate scholar of Scotland’s music – initiated a project to reconstruct the so-called Deskford carnyx, which was discovered in a peat bog at Leitchestown farm in Deskford, in the former Scottish county of Banffshire, in 1816. Only the boar’s-head bell survives, apparently placed in a shallow lake as a ritual deposit.

It was donated to Banff Museum, and is now on loan from Aberdeenshire Museums Service to the National Museum of Scotland in Edinburgh. In addition to John Purser as musicologist, the team for the reconstruction comprised the archaeologist Fraser Hunter, silversmith John Creed, acoustic physicist Murray Campbell, and myself as performer. The reconstructed instrument was unveiled in April 1993, when I became the first person to play a carnyx for two thousand years.

By any measure, the Deskford project was a success. It demanded the collaboration of specialists in the arts, sciences and humanities, and taught us a vast amount about the technological capabilities of an ancient people shrouded in mystery and misconception.

The educational reach of the project has been enormous; and furthermore it was literally sensational, attracting huge popular as well as professional interest internationally. It also opened up far more questions than it answered – and thus became a vital standard-bearer for the rapidly developing new discipline of music archaeology.

What is music archaeology, and why is it so important? Like every other branch of archaeology it involves the study of physical objects which are both fascinating in themselves and help us to understand our past. All of the accepted implications of archaeological artefacts are studied: material culture, trade, technology, social structures, war and peace, ritual and religion, life and death.

Reconstruction is an essential part of all branches of archaeology, but music is fundamentally different in one important way. If we reconstruct a temple or round house, we will not use it to live or worship in, we won’t regularly cook our meals in Iron Age cauldrons, and no matter how many wonderful chariots we build, none of us are going to work in them on a daily basis. Only a homicidal maniac might use a sword or spear for its original purpose.

Our lives have moved on – but music is uniquely timeless. A vulture bone flute copied from a Palaeolithic original, a harp reconstructed from a stone relief in Brittany, or a bronze horn discovered in a northern peat bog are not only wonderful to see and handle; if we can learn how to play them, the sounds we produce make that thing we call music, and the desire, indeed the need to make music is a defining characteristic of humanity across all cultures everywhere on the planet since our species became identifiable.

Anthropologists speculate that some form of organised sound almost certainly preceded human speech. And so music archaeology has a unique role to play in our understanding of what we are and where we come from. The sounds of these instruments, and the things we can do with them, have contemporary relevance.

Historical background & instruments a defining characteristic of humanity across all cultures everywhere on the planet since our species became identifiable. Anthropologists speculate that some form of organised sound almost certainly preceded human speech. And so music archaeology has a unique role to play in our understanding of what we are and where we come from. The sounds of these instruments, and the things we can do with them, have contemporary relevance.

The carnyx is a long Celtic trumpet made of beaten bronze, surmounted by the stylised head of a wild boar. The word appears in various classical texts: carnyces are described in accounts of the Celtic attack on Delphi in 279BC, as well as Julius Caesar’s campaign in Gaul and Claudius’ invasion of Britain.

The instrument was known through much of Europe from about 200BC to 200AD, and was widely depicted – notably on the Gundestrup cauldron (the most important example of Celtic Iron Age silver work, probably of Thracian origin but discovered in Denmark), which shows three carnyces held in a vertical playing posture so that the sound would have travelled from more than three metres above the ground.

The head of the Deskford carnyx is a fabulous work of proto-Pictish art, comprising a ridged soft palette, resonating chamber corresponding to the brain cavity, a wooden tongue mounted in the throat on a bronze leaf-spring, and a hinged lower jaw.

However, because only the head was discovered in 1816, the downward tubes and mouthpiece were speculative, based on the Gundestrup relief. One of the most difficult questions faced was that of the mouthpiece – models were produced based both on mediaeval and Renaissance brass instruments and on surviving related instruments from the ancient world, all of which used some form of cup shape.

None of these activated the carnyx satisfactorily. The solution adopted was a simple bronze ‘cushion’ approximately the diameter of the terminal tube, which prevents the player’s lips from being cut but directs lip vibration directly into the tube with no impedance. This enables an enormous range of pitch, dynamic and tone colour.

John Kenny ‘s Dragon Voices is a truly fascinating look and listen at what might have been.