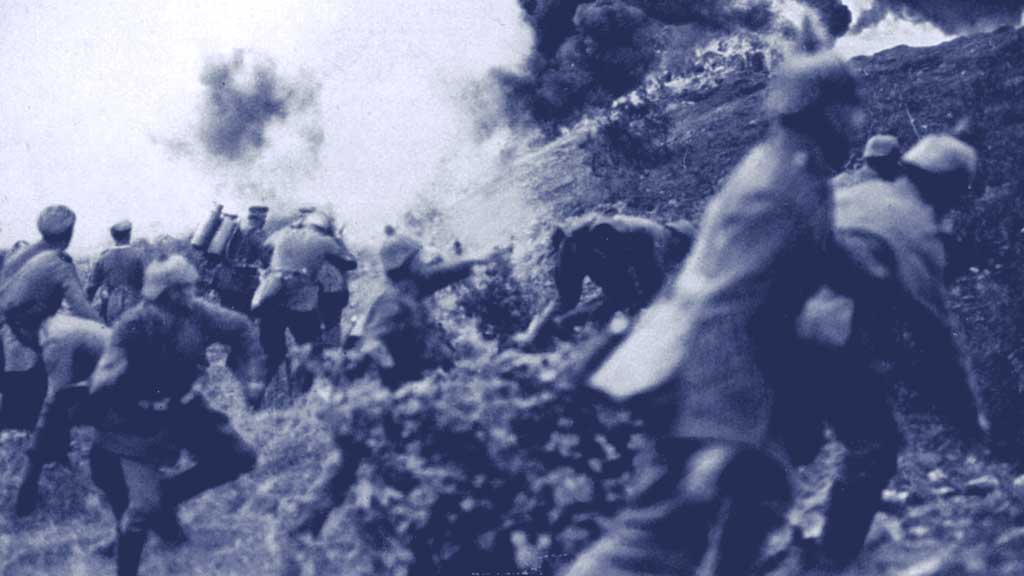 Storm of Steel – In Stahlgewittern

Storm of Steel (In Stahlgewittern is the original title) is one of the great books of World War I, if not the greatest. All sorts of trustworthy and unlikely people – and trustworthy often precisely because unlikely: cosmopolites, left-wingers, non-combatants – have stepped up to express their admiration, often in suitably embarrassed or bemused fashion: Böll and Borges, Enzensberger and Brecht, Gide and Moravia. In 1942, Gide wrote in his diary: ‘Ernst Jünger’s book on the 1914 War, Storm of Steel, is without question the finest book on war that I know: utterly honest, truthful, in good faith.’

Its contrast with most of the others is stark. It has no pacifist design and makes no personal appeal. It is a notably unconstructed book and does not set its author and his experience in any sort of context. Storm of Steel offers nothing in the way of hows and whys, it is pure where and when and of course, above all, what.

There is nothing in it about the politics of the war – nothing even on its outcome – and very little on the wider strategy of its conduct.

The book starts with the moment Private Ernst Jünger first detrains in France, on 27 December 1914, at the age of nineteen, with (though we aren’t told this) a rushed school-leaving certificate and a couple of months’ training behind him, having volunteered on 1 August, the opening day of the war.

(It is hard to imagine an English autobiographer or belletrist – a Graves or a Sassoon, amateur and holistic – wouldn’t have included that, or indeed the fact that the year before, as a bored romantic youth full of wanderlust, he had run away to Algeria to join the French Foreign Legion!)

It ends, in one of a bare handful of scenes that are away from the action, back in Germany four years later, when he is too badly hurt to carry on, a decorated lieutenant and the youngest-ever recipient of the pour le Mérite.

War is all – fighting is all – everything else is cropped away. And, from first to last, in the affirmative. It is the work of a man whom the war made – and who, in World War II, was to be again – a professional soldier.

It was published long before the likes of Blunden, Graves, Remarque and Sassoon, all of which appeared in the late 1920s, at a classic ten-year distance from the events they describe, giving their public and themselves time to recover; only Barbusse’s novel Le Feu (Under Fire), from 1917, came out much before Ernst Jünger’s account was first privately printed with a local firm (the family gardener, Robert Meier, was designated as the ‘publisher’) in 1920, at the instigation of Jünger’s father.

The impressively cumbersome original title was In Storms of Steel: from the Diary of a Shock Troop Commander, Ernst Jünger, War Volunteer, and subsequently Lieutenant in the Rifle Regiment of Prince Albrecht of Prussia (73rd Hanoverian Regiment).

The initial print-run was 2,000, the intended readership presumably members of the regiment and other veterans, and the work, in literary terms, was undistinguished and at times, apparently – hardly a surprise, considering its author’s repeated rush to get out of school – ‘even fell short of the required standard for a sixth-form essay’.

The ‘diary’ element, though never entirely suppressed later, was initially mostly all there was, closely following the sixteen notebooks Jünger filled during the war. The book steadily sold through its small printings, but it wasn’t the instant bestseller it is sometimes thought to have been.

In the strangest way, Storm of Steel isn’t really a personal book at all – it’s about the war. In his World War II Diaries, there is this very suggestive idea: ‘War isn’t like a cake that the two sides divide up between them to the last crumb; there is always a piece left.

That’s the piece for the gods, and it remains outside the argument, and it elevates the fighting from sheer brutality and demonic violence. Homer knew and respected it.’ Storm of Steel is about all of war, including that Olympians’ share.

It is still the Jünger repertoire, the contemplation, the casual fearlessness, the observation of huge and tiny things, the melancholy, the idea of the war-as-nature, the big metaphors, but with a new quality of introspection.

(Though this too has a hard edge, it’s momentary and continent and underplayed.) It’s a moment of war-weariness, of taedium belli, surprising in such a one.

For once, Jünger seems less like Achilles – sometimes he seems like Ajax – than like Hector. Influenza, enemy propaganda, bad food, silly accidents and foolish orders have all taken their toll, and twenty pages later, in the chapter called ‘My Last Assault’, there is what seems to me an utterly Homeric moment:

A figure in brown corduroy strode with equanimity across this fire-swept piece of terrain, and shook me by the hand. Kius and Boje, Captain Junker and Schaper, Schrader, Schläger, Heins, Findeisen, Höhlemann and Hoppenrath stood behind a hedge raked with lead and iron and talked through the attack. On many a day of wrath we had fought on one and the same battlefield, and today once more the sun, now low in the Western sky, was to gild the blood of all or nearly all.

What is Happening in Antarctica?

It was our last storm. How many times over the last few years we had advanced into the setting sun in a similar frame of mind! Les Eparges, Guillemont, St-Pierre-Vaast, Langemarck, Passchendaele, Mœuvres, Vraucourt, Mory! Another gory carnival beckoned.

‘A brilliantly vivid conjuration of the immediacy and intensity of battle … What raises Jünger to the level of epic is the grandeur of the prose, which is sublime but never sentimental’ Daniel Johnson, Daily Telegraph

‘Unique among the many works that deal with life and death in Flanders during the First World War’ Paul Bailey, Sunday Times