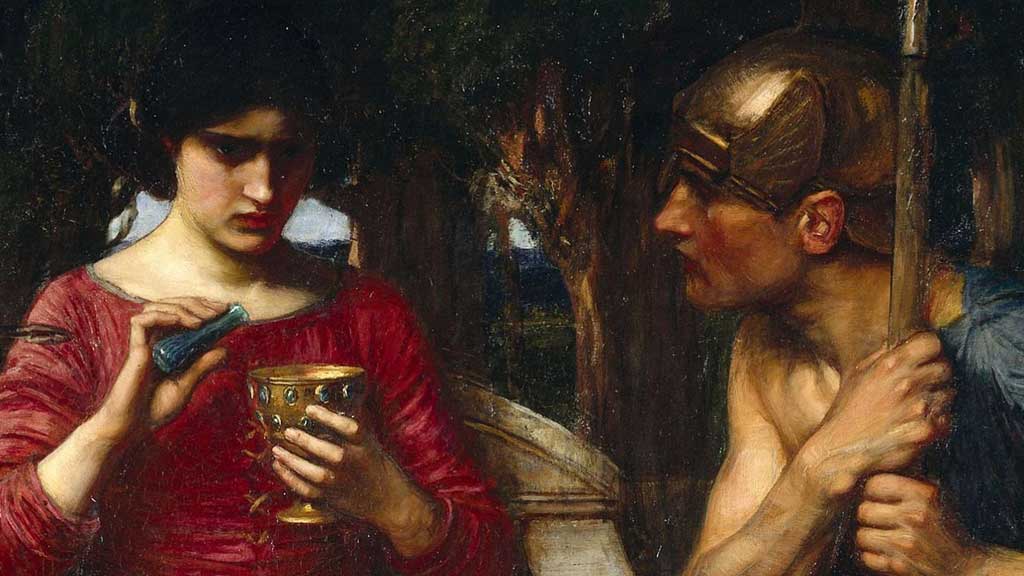 Amazing Secrets about the Golden Fleece and the Holy Grail

For those who are into the multi-level and the different themes of the Maier Files already noted that one of the themes associates with the Grail Quest, the hidden knowledge and the search for this power. The quest of the Golden Fleece and the Argonauts has always been in connection with the quest of the Holy Grail.

And yes, also this tale has plenty layers or levels. In Greek mythology, the Golden Fleece (Greek: χρυσόμαλλον δέρας chrysómallon déras) is the fleece of the gold-hair winged ram. So this Golden Fleece figures in the tale of the Argonauts, who set out on a quest for the fleece by order of King Pelias, in order to place Jason rightfully on the throne of Iolcus in Thessaly.

Through the help of Medea, they acquire the Golden Fleece. According to ancient Greek mythology, Aeson was the rightful king of Iolcos , but his half-brother Pelias usurped the throne. It was Pelias who sent Aeson’s son Jason and his Argonauts to look for the Golden Fleece.

Many times the quest of the Golden Fleece and the Argonauts has been in connection with the quest of the holy grail. And this tale has many layers too. The symbolism of the Lamb and the golden fleece are the same symbols as the Cauldron and Grail cup. To some initiates, Jan van Eyck’s most famous work  the Adoration of the Mystic Lamb, in Dutch: Het Lam Gods, is a symbolic Holy Grail map. And Van Eyck himself was to many researchers an initiate himself. One only need to watch closely to what’s depicted in his masterpiece and how …

There’s a hidden link with the order of the golden fleece (a Roman Catholic order of chivalry founded in the city of Brugge (Bruges) Flanders – by Philip III), secret societies and the esoteric layers is for another post.

The leader of the Argonauts was the Thessalien, Jason. His name meant ‘Saviour’. His twelve (or fifty two) companions were all sons of gods, heroes and poets of ancient Greece: Heracles, Castor and Pollux, Orpheus, to name only the most famous.  The Argonauts’ desired goal, was the Golden Fleece. It could not be discovered except by crossing a great sea: to the North, as all the old myths recount that the Argo, the Argonauts’ nef, navigated “by the North wind”.

the Island of Sun

To find “the Island of Sun”, situated near Midnight, they had carved the prow of their ship in an auspicious wood. This wood was cut from Dodone oak, the most sacred tree in Greece. This connects with the Thor’s sacred tree, the Oak. This famous sacred Oak tree stood in Geismar now Germany. It was consecrated to Thorr-Donar and it was a sacred tree of the Germanic pagans located in an unclear location around what is now the region of Hesse, Germany.

According to the 8th century Vita Bonifatii auctore Willibaldi, the Anglo-Saxon missionary Saint Boniface and his retinue cut down the tree earlier the same century. Wood from the oak was then reportedly used to build a church at the site dedicated to Saint Peter.

So Dodone  Δωδώνη, was the most famous of the Greek sanctuaries and the oldest Hellenic oracle. There stood the king of trees, the sacred Oak. Van Eyck in Flemish and Dutch means “of Oak” … The troubadours as well, these Provençal poets of Love (Minnesänger), had not forgotten the oak’s sacred aspect. It connects the knowledge and the songs of Love. Also known as the Leys d’Amors or the Laws of Love. The first troubadour, Saviour, received these laws from an eagle or falcon perched on the branch of a golden oak.

Troubadour means ‘trouveur’ (finder). The first among them ‘trouva’ (found) in the branches of an oak, the Laws of Love and of courtly poetry. The Argonauts — ‘finders’ themselves — discovered, at the end of their long expedition, the Golden Fleece in an oak tree. In a way, they were Chevaliers errants and they became Poets, as this originally Greek word also means ‘finder’. Even Goethe thought that the Golden Fleece had turned these ‘finders’ into poets: when his Faust, penetrated the night of classical Walpurgis, he demanded from the therapeutic centaur, Chiron, news of the “beautiful cohort of noble Argonauts and those who edify the world of Poets”. Half-man, half-horse, Chiron replies:

Faust, Part Two. Act II, Scene ‘On the lower Peneus”
More on this in another post

Two of the most powerful sorceresses of Greek mythology are Circe and Medea. Both are the daughters or priestesses of Hecate, a goddess of the waning and dark moon who came to be the patroness of witchcraft. (Her statue facing east stands nowadays in New York City cloaked under the name Statue of Liberty) Living on an island as an exile, Circe learned the art of magic. Her magic centered around the use of her female charms, such as her beautiful hair, which helped her control the creative and destructive forces. 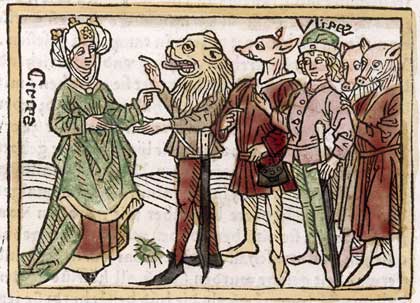 Mythology links Circe to the exploits of Odysseus who, on his travels home after the Trojan wars, arrived on Circe’s island. Circe’s spell turned his men into swine. However, a magical herb saved Odysseus from the same fate. With some forceful coercion from Odysseus, Circe lifted her spell over his men, but she was successful in keeping Odysseus from his travels back to his wife for one year. Art depicts Circe as a beautiful woman who carries a magician’s wand. She surrounds herself with men who she turns into animals.

Medea was a vengeful sorceress. She used magic potions and some trickery to achieve her own ends. One story in Greek mythology has her making her lover, Jason, invincible for one day by the use of a magical ointment so he could win the Golden Fleece. Art depicts her as standing over a bubbling cauldron, making an old ram young. 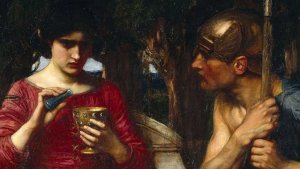 The myth has her cutting the ram into pieces while speaking magical incantations over them as they boiled into the shape of a lamb. The rejuvenation spell was actually a trick to lure her enemy, Pelias the King of Iolcus  Ιωλκός – (an ancient city in Magnesia, Thessaly, Greece) into believing that the spell would also make him young again. It is not surprising that Medea disappeared before saying the appropriate spell, leaving behind her enemy’s corpse. 😉