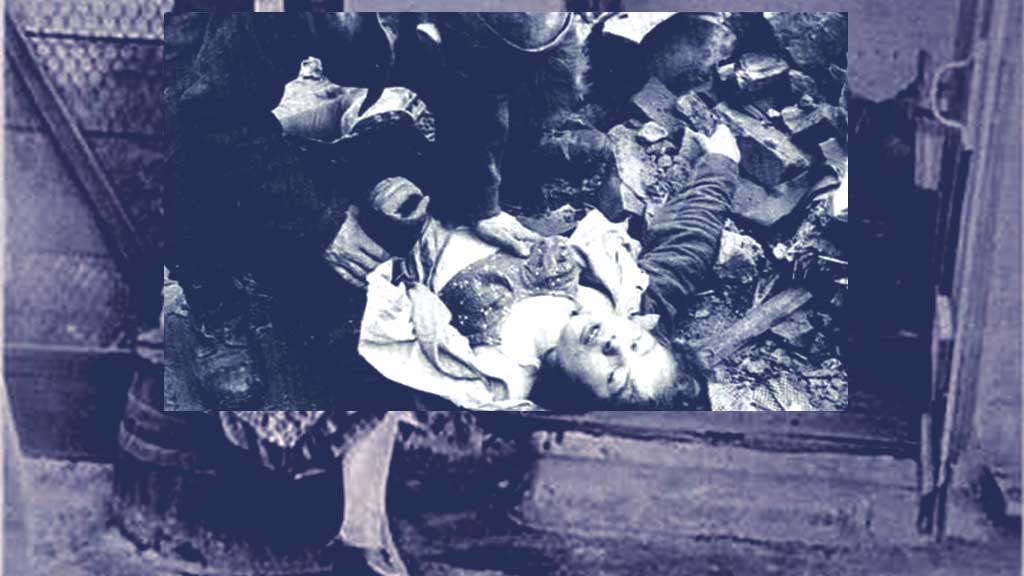 Marta Hillers, the rape and suffering of German women

They Raped Every German Female from Eight to Eighty

Marta Hillers’s only consolation was that she had refused to put her name on the extraordinary manuscript in which she had so meticulously recounted the Soviet conquest of Berlin during the cold spring of 1945. It had been a time when her life—like that of tens of thousands of other Berlin women and girls—had become a nightmare of fear, hunger, and rape.

Published for the first time in German in 1959, the book had brought to life one of the worst military atrocities ever. According to estimates extracted from hospital records, between 90,000 and 130,000 Berlin women had been raped during the last days of the war and the first days of Soviet occupation. Tens of thousands of others had fallen victim elsewhere in the Soviet zone.

Hillers had expected the book to be welcomed by a people who wanted the world to know that they, too, had been the victims of war. However, Berliners had responded with either hostility or silence. The world still felt little sympathy for any pain inflicted on a German people who had brought the world so much suffering.

Berlin women who had lived through the humiliation had no desire to recall it. And Berlin men found it too painful to be reminded of their failure to protect their wives and daughters. Early 1961 was a time of complacency and amnesia in Soviet-dominated East Germany and East Berlin, and there seemed little reason to get worked up about a history that no one had the power to change or the stomach to digest.

A woman in Berlin

Perhaps the German response should have been no surprise to Hillers, given the shame she herself expressed in signing her memoirs, Eine Frau in Berlin (A Woman in Berlin), only as “Anonyma.” She’d published them only after marrying and safely moving to Switzerland.

The book had not circulated or been reviewed in East Germany, and only a few copies had been smuggled across to the communist zone in suitcases stuffed full of Western fashion magazines and other more escapist literature.

In West Berlin, Anonyma’s memoirs sold poorly, and reviews accused her either of anticommunist propaganda or of besmirching the honor of German women—something she would insist that Soviet soldiers had done just fine long before her.

One such review, buried of West Berlin’s Tagesspiegel, bore the headline:

What irritated the reviewer, who accused the author of “shameless immorality,” was the book’s uncompromising narrative that so richly captured the cynicism of the postwar months. Judgments like that of Der Tagesspiegel prompted Hillers to remain underground and to prohibit any new editions of the book from being published during her lifetime, which ended at age ninety in 2001.

She would never know that, following her death, her book would be re-published and become a best-seller in several languages, including the German edition in 2003. Nor would she ever have the satisfaction of knowing her story would be made into a major German movie in 2008 and become a favorite of feminists everywhere.

Back in 1961, Hillers was more concerned with dodging the reporters who were trying to hunt her down from the few clues in her published pages. The book revealed that she was a journalist in her thirties, had lived in the Tempelhof district, had spent sufficient time in the Soviet Union to speak some Russian, and was “a pale-faced blonde always dressed in the same winter coat.” None of that had been enough to identify her.

Still, nothing better captured the German attitude of the time toward their occupiers than the substance of Hillers’s book and Berliners’ aversion to reading it. The East German relationship to their Soviet military occupiers, who still numbered 400,000 to 500,000 by 1961, was a mixture of pity and dread, complacency, and amnesia. Most East Germans had grown resigned to their seemingly permanent cohabitation. Among those who hadn’t, many had fled as refugees.

The East German pity toward their Soviet occupiers, whom they considered inferior to them, came from what they could see with their own eyes: undernourished, unwashed teenagers in soiled uniforms who would drop to the ground to retrieve the unfinished stubs of their discarded cigarettes or trade their service medals and gasoline for any form of consumable alcohol that would help them briefly escape their miserable existence.

The pity was also stirred by the occasional alarms that accompanied desperate attempts at desertion. For the teenage soldiers, the brutality of officers, hazing by fellow soldiers, and the cold and overcrowded quarters occasionally became too much to bear.

Their barracks, built during the Third Reich or earlier, housed three times the number of soldiers that Hitler had ever bunked there.

The latest escape had come after an insurrection on New Year’s Eve, when a barracks uprising in Falkenberg had resulted in the escape to West Berlin of four soldiers and the dispatch of Soviet search parties along the Berlin border. Stories circulated of Soviet troops setting alight barns and other structures where deserters had gone in hiding—burning the escapees alive alongside farm animals.

That only increased a deeply ingrained German dread of the Soviets.

That dread had grown after the events of June 17, 1953, when Soviet troops and tanks had put down a workers’ revolt after Stalin’s death that had shaken the young East German state to its fragile foundations. As many as 300 East Germans had died then, and a further 4,270 were imprisoned.

Yet the deeper roots of East German terror were found in the events that Hillers had described. There was a reason why women in East Berlin froze up whenever a Soviet soldier passed by or when East German leader Walter Ulbricht spoke on the radio of the enduring friendship with the Soviet people.

Hillers described why outsiders had so little sympathy for what German women had suffered—and why many Germans wondered whether some vengeful God had delivered this punishment of rape in retribution for their own misbehavior.

“Our German calamity,” Hillers wrote during the first days of occupation, “has a bitter taste—of repulsion, sickness, insanity, unlike anything in history. The radio just broadcast another concentration camp report.

The most horrific thing is the order and the thrift: millions of human beings as fertilizer, mattress stuffing, soft soap, felt mats—Aeschylus never saw anything like that.”

Hillers despaired at the stupidity of Nazi leaders who had issued orders that liquor should be left behind for advancing Soviet troops on the theory that inebriated soldiers would be less dangerous adversaries.

If it had not been for Soviet drunkenness, Hillers wrote, Berlin women would have suffered only half as much rape at the hands of Russians who “aren’t natural Casanovas” and thus “had to drown their inhibitions.”

With characteristic power, she described one of the many times she’d been raped and how it had driven her to seek protection.

The one shoving me is an older man with gray stubble, reeking of brandy and horses…No sound. Only an involuntary grinding of teeth when my underclothes are ripped apart. The last untorn ones I had.

Suddenly his finger is on my mouth, stinking of horse and tobacco. I open my eyes. A stranger’s hands expertly pulling apart my jaws. Eye to eye. Then with great deliberation he drops a gob of gathered spit into my mouth.

I’m numb. Not with disgust, only cold. My spine is frozen: icy, dizzy shivers around the back of my head. I feel myself gliding and falling, down, down through the pillows and the floorboards. So that’s what it means to sink into the ground.

Once more eye to eye. The stranger’s lips open, yellow teeth, one in front half broken off. The corners of the mouth lift, tiny wrinkles radiate from the corners of his eyes. The man is smiling.

Before leaving he fishes something out of his pants pocket, thumps it down on the nightstand, and without a word, pulls the chair aside, and slams the door shut behind him. A crumpled pack of Russian cigarettes, only a few left. My pay.

I stand up—dizzy, nauseated. My ragged clothes tumble to my feet. I stagger through the hall…into the bathroom. I throw up. My face green in the mirror, my vomit in the basin. I sit on the edge of the bathtub, without daring to flush, since I’m still gagging and there’s so little water left in the bucket.

It was at that point that Marta Hillers made her decision. She cleaned herself up a bit and went to the street to hunt for a “wolf,” a higher-ranking Soviet officer who would become her protector. She concluded it was better to be abused by just one Russian on a regular basis than by an unending string of them. Like millions of other Germans, Hillers was reaching an accommodation with an occupation she could not resist.

Only years later would researchers try to reconstruct the full horror of that time. Between the late summer and early autumn of 1945, a minimum of 110,000 women between the ages of twelve and eighty-eight had been raped. Some 40 percent of the victims were raped on multiple occasions.

One in five of the rape victims became pregnant, roughly half of these gave birth, and the other half had abortions, often without anesthesia. Thousands of women killed themselves for the shame of having been raped or out of fear of being the next victims. Some 5 percent of all Berlin newborns in the following year would be “Russenbabies.” Across Germany, the number would be 150,000 to 200,000 children.

It was as these children were first becoming teenagers, in 1958, that Khrushchev would provoke what would become known as the Berlin Crisis.

Berlin 1961 the most dangerous place on earth

In June 1961, Nikita Khrushchev called Berlin “the most dangerous place on earth.” He knew what he was talking about.

Much has been written about the Cuban Missile Crisis a year later, but the Berlin Crisis of 1961 was more decisive in shaping the Cold War-and more perilous.

It was in that hot summer that the Berlin Wall was constructed, which would divide the world for another twenty-eight years. Then two months later, and for the first time in history, American and Soviet fighting men and tanks stood arrayed against each other, only yards apart. One mistake, one nervous soldier, one overzealous commander-and the tripwire would be sprung for a war that could go nuclear in a heartbeat.

On one side was a young, untested U.S. president still reeling from the Bay of Pigs disaster and a humiliating summit meeting that left him grasping for ways to respond. It would add up to be one of the worst first-year foreign policy performances of any modern president.

On the other side, a Soviet premier hemmed in by the Chinese, East Germans, and hardliners in his own government. With an all-important Party Congress approaching, he knew Berlin meant the difference not only for the Kremlin’s hold on its empire-but for his own hold on the Kremlin.

Neither man really understood the other, both tried cynically to manipulate events. And so, week by week, they crept closer to the brink.

Frederick Kempe, “Berlin 1961: Kennedy, Khrushchev, and the Most Dangerous Place on Earth” A very good read!