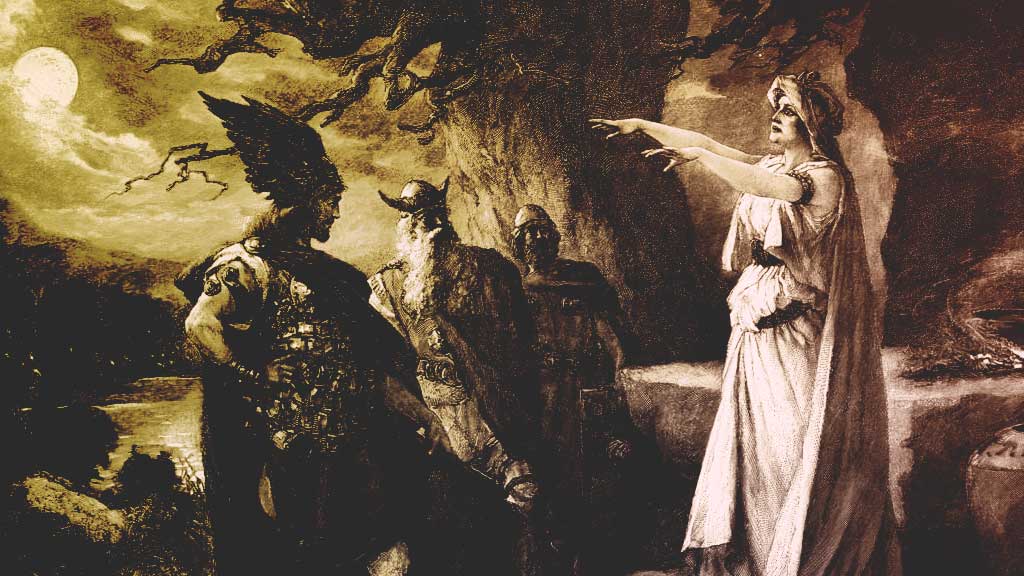 Tacitus gives us some fascinating details in Books 7 and 8 of his Germania, written in about 98 CE, relating to the role of German women in war and battle. He points out that a major contribution to German military success lay in the fact that their fighting units were not made up of warriors randomly formed into motly crews. But rather are ‘composed of men from one family and that their households go with them to the battle, and the shrieks of their women and the wailings of their children ring in their ears’. 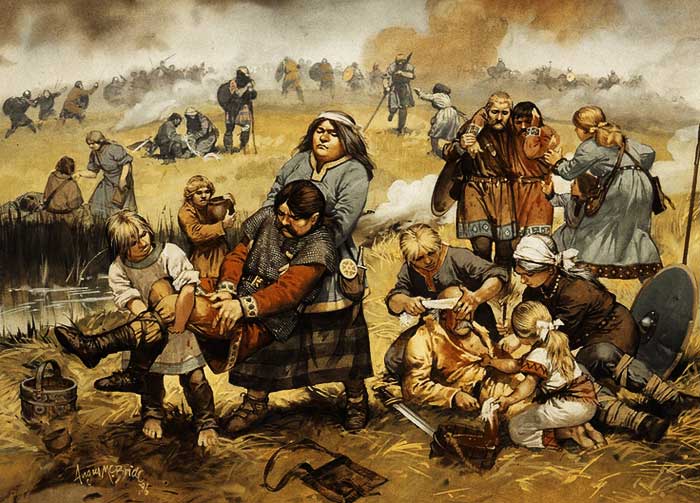 The effect of this is that ‘Each man feels bound to play the hero before such an audience and to earn their most coveted praise’. The wounded German soldier brings his wounds ‘to his mother and to his wife he brings his wounds; and they do not shrink from counting them, nor from searching them, while they carry food to the fighters and give them encouragement’.

In Book 8 Tacitus adds that ‘their traditions show that more than once, when a German line was wavering on the point of crumbling it was the women who rallied it, urgently urging the men to fight on, baring their breasts and crying out that their captivity was imminent’.

Women then played a key role in motivating their warrior men, goading them with the prospect of capture by the enemy. These women knew also that their men hated captivity for their women far more than for themselves – aware, no doubt, of the servitude and rape that awaited them.

The Romans capitalised on this fact: Tacitus says ‘as a matter of fact, we always obtain the firmest hold over those states which are compelled to include amongst the hostages they send us some girls of noble birth’. He goes on to assert that the Germans even ascribe to women ‘a certain inspiration and power of prophecy’; they actually listen to what their women say and pay heed to their prophecies. Prophecies would presumably have included forecasts relating to the outcome of battles, and perhaps even strategy, thus giving their women a crucial role in military planning.

Ruled by a Woman

The Sitones, Tacitus says ‘are conterminous with those of the Swedes, whom they resemble in all respects with only one point of difference: they are ruled by a woman’. This would assume some sort of position of responsibility in military matters. Tacitus adds acidly, ‘So far, they (the Germans) fall not merely below the position of free-men, but even beneath that of slaves’. 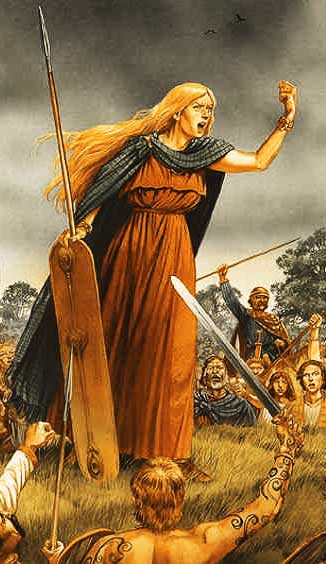 He adds an interesting footnote when he references two women, one called Veleda, a prisoner in Rome in the days of Vespasian, and one Aurinia (also known as Albruna). In the second half of the 1st century CE Veleda, a priestess of the Bructeri, was regarded as a goddess by most tribes in central Germania and was accordingly very influential.

She lived in a tower on the Lippe River, near modern-day Lippstadt. (North Rhine-Westphalia) The inhabitants of the Roman settlement of Colonia Claudia Ara Agrippinensium (Cologne – Köln) accepted her arbitration in a conflict with the Tencteri, an unfederated tribe of Germania. Her finest hour, though, came during the Batavian rebellion of 69–70 CE, led by the Romanised Batavian chieftain Gaius Julius Civilis, when she correctly predicted the initial successes of the rebels against the Romans.

The Batavian leader Civilis originally raised his army as an ally of Vespasian in 69 CE, but when he saw the weakened condition of the legions in Romanised Germany he openly rebelled. Veleda may have had a hand in inciting the rebellion which, in early 70, was joined by Julius Classicus and Julius Tutor, leaders of the Treviri, all Roman citizens like Civilis.

The Roman garrison at Novaesium (now Neuss) capitulated without a fight, as did Castra Vetera (near modern Xanten). The commander of the Roman garrison, Munius Lupercus, was ordered to Veleda, but he was killed en route, evidently in an ambush. The praetorian trireme was captured, and rowed up the Lippe as a gift to Veleda.

It took nine Roman legions under Gaius Licinius Mucianus to end the rebellion. The Romans treated the rebels leniently in order to reconcile them to Roman rule and military service. Veleda was left to go free for several years. In 77 CE the Romans either captured her, perhaps as a hostage, or offered her asylum. Whatever, she enjoyed international fame: a Greek epigram has been found at Ardea, south of Rome, that satirises her prophetic powers. Veleda may have later acted for Rome by negotiating the acceptance of a pro-Roman king by the Bructeri in 83 CE. 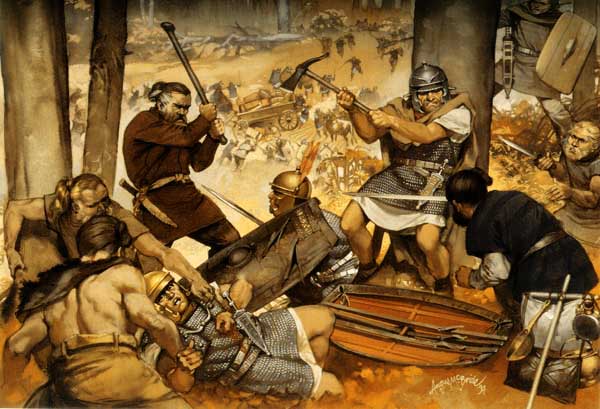 Thusnelda (b.c. 10 BCE) was a German noblewoman, the daughter of the Cheruscan Prince Segestes. Although her father had intended her for another, she was captured by Arminius who made her pregnant. This was the same Arminius who annihilated three Roman legions at the Battle of Teutoburg Forest in 9 CE. In 15 CE Thusnelda was surrendered to Germanicus by her father in gratitude to Germanicus for driving off Arminius’ besieging forces. In 17 CE Thusnelda and her son were paraded as prized trophies in the triumph granted to Germanicus.

Ganna was a German prophet and priestess of the Semnones tribe. She was politically active, and acted as a diplomat and representative for the Semnones in negotiations with the Emperor Domitian (r. 81–96 CE).

Fritigil (or Fritigils), Queen of the Marcomanni, is the last known ruler of the Germanic peoples who were, in the mid-fourth century, in Pannonia. Fritigil corresponded with Ambrose of Milan regarding the conversion of her people to Christianity. According to the Notitia Dignitatum, she convinced her husband to submit to Roman authority and the tribe fell under the power of a tribune.

Amalafrida was the daughter of Theodemir, King of the Ostrogoths, and sister of Theodoric the Great. In 500 CE, to further consolidate his authority over the Vandals, Theodoric arranged a marriage alliance with Thrasamund, King of the Vandals and Amalafrida. She brought not only a very large dowry, but also 5000 Gothic troops.

On Celtic and Gallic women in war there is ample evidence to prove their natural bellicosity and bravery. Dio Cassius: ‘the Romans pursued the Celts to their wagons and fought with their women.’ Diodorus Siculus: ‘The women of the Gauls are not only like men in their great stature, but they are a match for them in courage as well.’ (5.32). Ammianus Marcellinus (Res Gestae, p. 80):

A whole band of foreigners will be unable to cope with one (Gaul) in a fight, if he calls in his wife, she is stronger than he by far and has flashing eyes; least of all when she swells her neck and gnashes her teeth, and poising her huge white arms, begins to rain blows mingled with kicks, like shots discharged by the twisted cords of a catapult.

Women at War in the Classical World