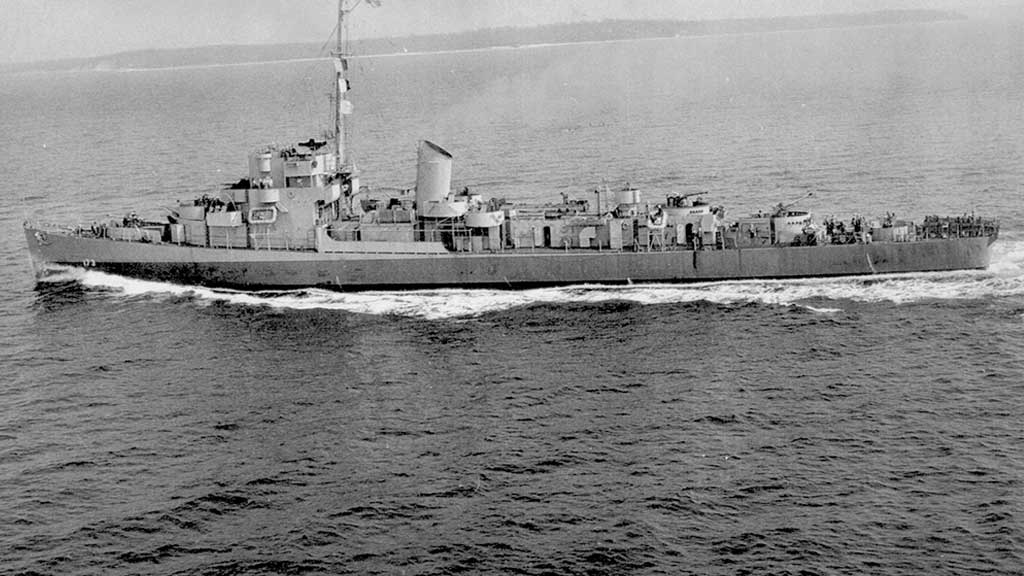 On 13 January 1955 Morris K. Jessup, writer of The Case for the UFO (1955), obtained a letter from a gentleman identifying himself as Carlos Allende. This informed Jessup of a top-secret naval project from the Second World War: the Philadelphia Experiment. So, Allende reported that the US Navy had tried to make warships undetectable. And it was successful in that endeavor on October 28, 1943. On that date the escort destroyer USS Eldridge disappeared from its berth at the Philadelphia Navy Yard. He claimed that the ship was teleported 600 miles, 1,000km away to Virginia.

Allende had seemingly been a witness to the invisibility experiment from a close by merchant ship, the SS Furuseth. The impact on the Eldridge’s crew was so horrific that the Navy hurriedly suspended the project. Many sailors disappeared for ever, certain fused into bulkheads, some became totally crazy. Jessup required of course more details from Allende. None came, and so Jessup dismissed Allende’s statements as a hoax.

Others were a lot more persuaded by the story, among them Charles Berlitz and William L. Moore, who published the fullest account of the 1943 events as The Philadelphia Experiment: The True Story Behind Project Invisibility in 1978. According to Berlitz and Moore, the US Navy accomplished the disappearance of the Eldridge by use of the Unified Field Theory, essentially bending light around the vessel to make it “invisible”.

Berlitz and Moore noted that a major spokesman and investigative theoretician of the theory, Albert Einstein, was a US

Navy consultant during the time of the Philadelphia Experiment. It was also worrisome that Jessup had committed suicide (in 1959).

Maybe, rather, he was killed by the US government since he knew too much? In a bizarre twist Al Bielek, who claimed to be a former seaman on the Eldridge, came forward to state he had fallen from the ship’s deck while it was in “hyperspace” between Philadelphia and Norfolk on 28 October 1943 and landed at the Air Force station Montauk Point, Long Island, in 1983, having undergone time travel as well as teleportation.

The US Office of Naval Research (ONR) has consistently denied the existence of the Philadelphia Experiment, or any Second World War research into invisibility, denouncing the Allende/Berlitz and Moore story as “science fiction”.

The ONR has a point. The journalist Robert Goerman has claimed that Allende (who changed his name to Carl Allen) had a history of psychiatric illness and the Philadelphia story was a resultant delusion. Allen certainly served on the SS Furuseth, but the master of that vessel stated that neither he nor his crew saw anything out of the ordinary in October 1943.

The Eldridge,-moreover, wasn’t even in Philadelphia on 28 October of that year: it was on duty in the Atlantic. A reunion of Eldridge veterans told the Philadelphia Inquirer in 1999 that they “find the story amusing – especially because the ship never docked in Philadelphia”.

UFO investigator Jacques Vallee has suggested the Philadelphia Experiment legend has a slender basis in reality. The US Navy was experimenting with “invisibility” in the 1940s, but not as Allen/Berlitz and Moore/Bielek understood it. Vallee interviewed Edward Dudgeon, a seaman in the Philadelphia yards in October 1943. The yards were seeking to make ships “invisible to magnetic torpedoes by de-gaussing them”.

Dudgeon described the procedure: They sent the crew ashore and they wrapped the vessel in big cables, then they sent high voltages through these cables to scramble the ship’s magnetic signature. This operation involved contract workers, and of course there were also merchant ships around, so civilian sailors could well have heard Navy personnel saying something like, “they’re going to make us invisible,” meaning undetectable by magnetic torpedoes .