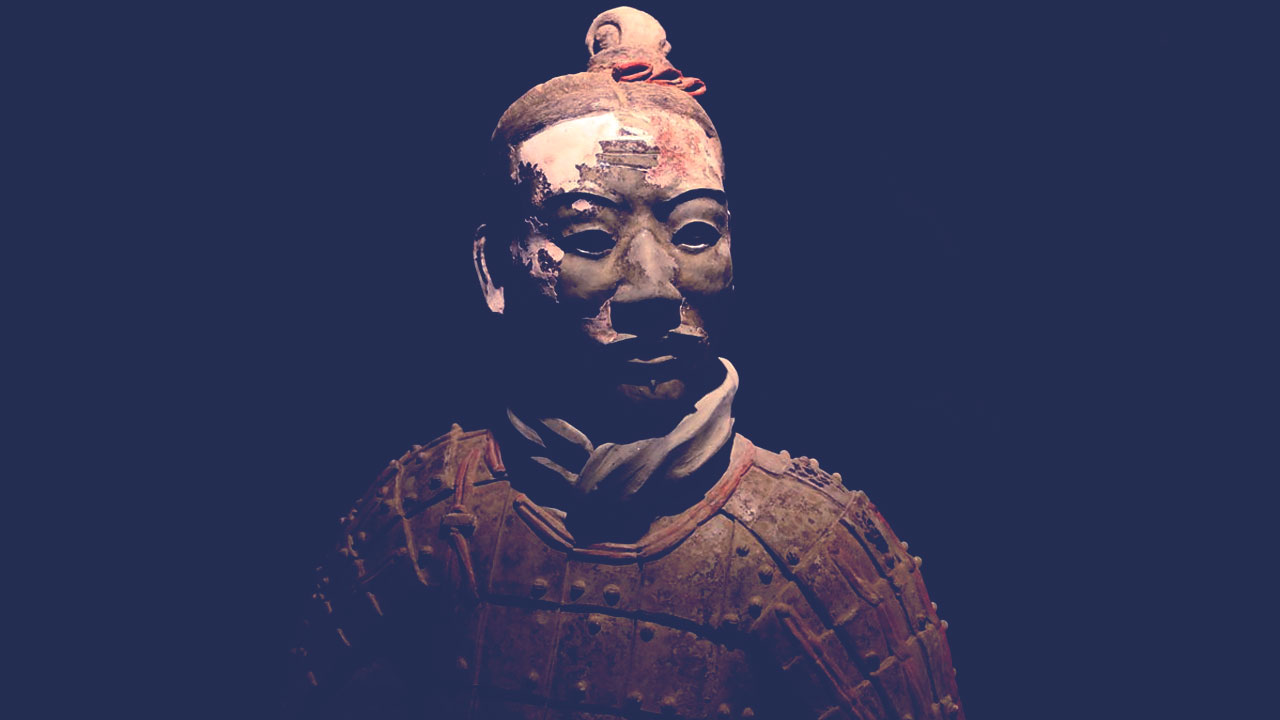 Deception in War, the command skills necessary for success 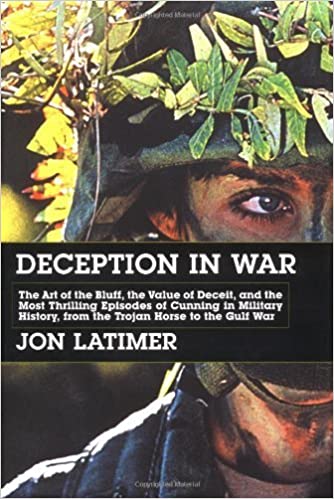 Deception in War: The Art of the Bluff, the Value of Deceit, and the Most Thrilling Episodes of Cunn
Available at Amazon

Deception in War. Surprise is a Principle of War…It should primarily be directed at the mind of an enemy commander rather than at his force. The aim should be to paralyse the commander’s will.’ Surprise is the great ‘force multiplier’ – it makes one stronger than is physically the case. Surprise can be achieved by a variety of methods: by forgoing preparations that an enemy might expect one to make, by attacking at an unexpected time, by using ground deemed impassable (as with the German drive through the Ardennes in May 1940), through bold and innovative tactics or by the employment of powerful new weapons (the T-34 tank came as a terrible surprise to the Germans in the USSR in 1941).

However, among the many factors contributing to the achievement of surprise, surely the most important is deception. It might be argued that security is an even more important concern, but in battle it is not sufficient for a commander to avoid error; he needs actively to cause his enemy to make mistakes.

Deception is an active measure with precisely that aim (requiring security among other things and including passive elements such as camouflage), and since the stratagem, or ruse de guerre, is as old as warfare itself, it is a foolish commander who ignores it. Indeed, the greatest generals in history have been masters of it, and it has been the downfall of many another. Everybody employs deception at times, either to gain an advantage or for more altruistic reasons.

Although adults reprimand their children for lying, they themselves lie all the time, especially to their children. Deception is such an integral part of our lives that we often fail to recognize it. Surveys indicate that politicians are distrusted because they are perceived as deceitful, but everyone recognizes that a certain measure of ‘economy with the actualité’ is a necessary requirement of the profession.

Nothing new under the sun

If politicians always said exactly what they thought, they would have very short careers. There is, as the saying goes, nothing new under the sun, and as we examine the historical development of deception in war we will see the same themes and techniques recurring and repeating themselves in subtle new ways. However, this book (Jon Latimer’s Deception in War) is intended not as a history of deception – that would be a lifetime’s work – but as an examination of the art of deception. To be successful, the deceiver needs to know and understand the mind of the enemy commander.

Rashness, excessive audacity, blind impetuosity or foolish ambition are all easily exploited by the enemy and most dangerous to any allies, for a general with such defects in his character will naturally fall victim to all kinds of stratagems, ambushes and trickery. – Polybius, The Rise of the Roman Empire

The place of self-deception in this process is an important one. Our perceptions develop through the process of learning, but are overlain by a sociological and cultural baggage that correlates to our prejudices. Much of the time we view our experiences through these mental templates, and whatever does not fit our prejudices tends to be overlooked or discarded.

The elders in most societies have traditionally been regarded as the repositories of collective wisdom, which tends to reinforce conservatism in thought – a particular tendency in the military that Norman Dixon highlights in his book On the Psychology of Military Incompetence. Under stress this tendency tends to be further reinforced. We hate disorder and confusion and our every mental effort tries to impart order and meaning to events; even when information is limited or contradictory, we remain eager to draw conclusions. And since the mind can only cope with so much information at any one time, we are forced to filter and prioritize the information stream. Thus it can be said that all deception in war should be based on what the enemy himself not only believes, but hopes for. (D. Mure, Practise to Deceive)

Information is a premium commodity on any battlefield and increasingly vast amounts of it are required for successful operations, with many means being employed to collect and process it. Consequently, skilfully conveyed false information often has great influence on the mind of an enemy and the course of operations.

Since military organizations look through doctrinal and physical templates as well as the mental templates of its individual members, it is this that provides the basis for deception. The information an enemy requires to make decisions can be manipulated, if one understands the templates he is using. And a reputation for being crafty and deceptive will enhance the anxiety and uncertainty of one’s opponent.

War is the most extreme condition that most people are ever likely to face. It is not a ‘gentlemanly’ pursuit but often a matter of survival requiring ruthless measures in its pursuit. So it is very often in times of weakness that commanders first think of deception as a means of evening the odds.

The Marxist–Leninist system, with its belief in inevitable and predictable dialectical change, accepted that anything that promoted that change was desirable if not essential, and that deception was therefore a legitimate tool in peace and war (as the Soviets demonstrated between 1941 and 1945). In the West, on the other hand, deception is often seen as immoral, and more than one authority has claimed that, as a result, Americans resort to deception only reluctantly or else do it poorly.

In fact, however, many Americans displayed a natural flair for deception during the Civil War, just as they had during the Revolution eighty years previously. Yet for a long time deception did indeed run counter to the American concept of military honour. There was a strange reluctance among some Americans during the twentieth century to accept it as part of modern warfare, and certainly the Americans resorted to deception only intermittently during the Second World War. Colonel William A. Harris, the principal American deception officer in Europe, was converted to belief in the value of FORTITUDE SOUTH (part of the deception cover plan for the Normandy landings in 1944) only after its success.

Perhaps by this stage the Americans felt sufficiently strong to win the war without resort to deception, whereas earlier on, when they were weak as a result of the Japanese attack on Pearl Harbor, the US Navy made extensive use of it. Yet deception can clearly be benign: were it not for BODYGUARD (the overall plan of which FORTITUDE was a part) the defeat of the Third Reich would undoubtedly have been yet more protracted and bloody. The British, despite their reputation for ‘fair play’, have long shown a remarkable flair for deception, and by the end of the Second World War they had an unrivalled mastery in the art of military deception (which they have since largely forgotten).

In contrast, the most efficient military machine of the past century – that of Germany – has been less strongly inclined towards deception, except in the form of Hitlerian machinations. While the German Army has always understood the importance of surprise and has consistently achieved it, its preferred method has generally been the one described by Frederick the Great as ‘speed and violence’. The purpose of Jon Latimer’s book is to describe and explain the systematic telling of lies for specifically military purposes.

In this context we are dealing with very creative minds that seek to weave delicate tapestries of information in a fragile and hostile environment. It is a difficult process that combines great risk with the potential for enormous gain. The most effective deceivers display an unorthodoxy of thought that is usually little appreciated in a peacetime army.

Perhaps more than any other branch of military endeavour, successful deception is an art rather than a science, although science increasingly provides the technical means by which deception is created. Many of the best practitioners have had backgrounds in both the visual and the performing arts, but the art of deception is most successful when applied patiently, with proven techniques guided by solid principles.

These we will examine in the light of examples from history, but with particular reference to the twentieth century, when technology transformed the techniques, if not the principles of deception, and thus complicated matters considerably.

Some would say that modern technology renders deception more difficult but throughout history deceivers have exploited the latest technological developments. The information revolution taking place today is having an impact comparable to that of the industrial revolution and will probably be accompanied by changes on a similar scale in the nature of war; but deception will no doubt continue just as long as warfare does. And, of course, there is something deliciously, wickedly, entertaining about pulling the wool over an opponent’s eyes. Jon Latimer’s “Deception in War” is a book packed with such lies!
src. Jon Latimer -> https://amzn.to/2Xlgms7

Another article: Genius for Deception – The British enjoy deceiving their enemies