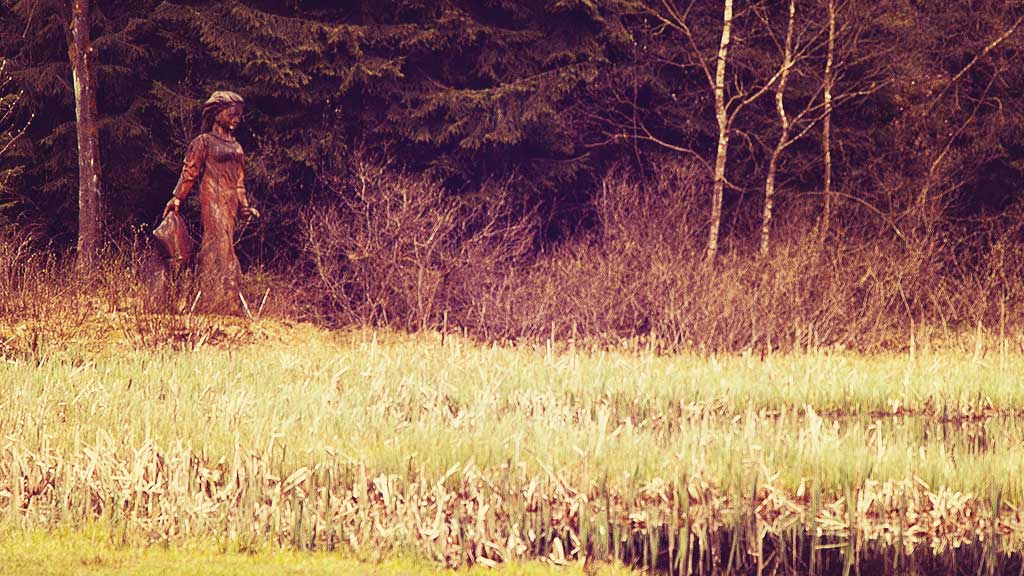 a story about Frau Holle

Tidbits on the tale of  Frau Holle’s kitzen.

There is a mountain in Hessen, Germany called the Meissner where one still can find traces of the central German goddess Holle, Holda or Helja. It’s a place where her cult seems to have survived for a long time.

There are roads going to the mountaintop and there are many hiking paths. Close to the top is the Frau Holle Teich, a small lake fed by mountain springs. Only a few centuries ago the local women used to climb to the lake, where they sacrificed and prayed to have children.

Helja or Holle from the Meissner was known as a benevolent Hel, but nevertheless she had a rough sense of humour. She is renowned for turning drunkards into oxen by ringing her magical bell and in wintertime, when she covered the land under a veil of pure white snow, she walked through the local villages and cribs blessing those who work and cursing those who laze.

Nearby one can find the Kitzkammer, a tiny grotto of volvanic rock. It looks like a vertical gap in the basalt, barely large enough to stand upright. According to legend, Frau Holle had a heart for homeless girls and women, those who had lost their relations and those who had been kicked out for getting pregnant. On the mountaintop there was an invisible palace where these women could rest and dwell.

One day, Frau Holle was out for her famous walk in the mist and some girls began to quarrel. When Holle came back, she found them screaming and hitting each other. So Frau Holle rang her magical bell and transformed them into Kitze. This might mean cats (German word Katzen) or maybe owls (from German word Käuze) or young deer or Rehbock (Kitze).

In this shape they were confined to the Kitz-chamber. The nearby village Hilgerhausen gave its name to another bigger cult cave, one of the biggest known in Hessen and also by some scholars associated with Hel. Holle and her young devoted girls appear in several folk tales of central Germany.

Most people will recognise Frau Holle as Mother Hulda from the Grimm’s fairy tales. But in almost all the different legends and local tales the goddess is associated with an underworld and a mountain that can be entered through a well or small lake, and her myth is full of references to rite of passage, women and the transmission of the seasons.