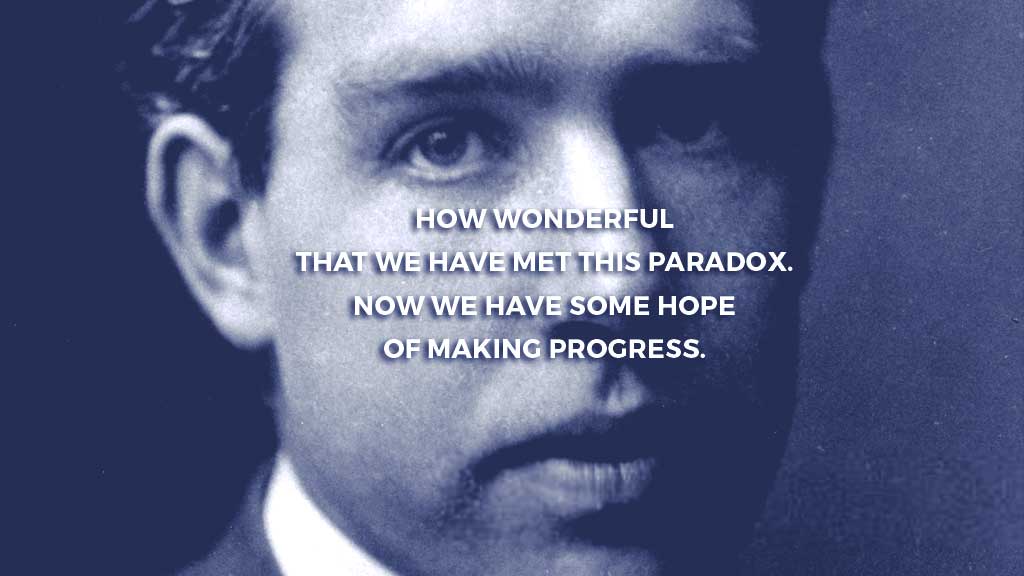 Is understanding seeing the paradoxes?

Understanding entails being able to detect an internal contradiction

Understanding entails being able to detect an internal contradiction: a paradox. Are paradoxes “all in our heads” or are they built into the universal structure of logic?

At first sight the idea of knowing what the universe is like, is absurd. American-Canadian neurosurgeon Penfield expanded brain surgery’s methods and techniques, including mapping the functions of various regions of the brain. Penfield’s experiments demonstrated that memories occupy engrams, specific physical sites in the brain.

To know about Julius Caesar or snow or Tasmania is to have some part of your brain that represents Julius Caesar, snow, or Tasmania. These brain sites may wander and interpenetrate, and the whole story about how memories are stored and recalled is probably a lot more complicated than we can imagine today. That granted, engrams are not infinitely small. Your mental representation of Julius Caesar occupies a part of your brain’s storage capacity that cannot be occupied simultaneously by anything else.

You might naïvely picture the brain as containing scale models of things in the outside world. It is evident that these models must leave out much detail. The very fact that the universe is so much larger than your head makes universal knowledge unattainable. There is no way a human brain can contain representations of everything in the world.

That our brains work as well as they do indicates that they are selective in what they retain. The primary tool for condensing the complexity of the world is generalization. Our brains do this at many levels. Science is a conscious and collective way of simplifying through generalization. It is a means of packing the great, vast universe into our tiny brains.

Science is a mnemonic or memory device. Rather than remembering what has happened to every apple released from its support, we remember gravity. It is a map of the external world. Like any map, it omits detail. Small towns, trees, houses, and rocks are left out of road maps to make room for highways, coastlines, national boundaries, and other features judged more significant to the map’s users. Comparable judgments face the scientist.

Science must be more than a desultory catalogue of information. It must embrace not only the collecting of information but the understanding of it. What is understanding? Surprisingly, this philosophical question can be given a rather exact, if preliminary, answer.

At a bare minimum, understanding entails being able to detect an internal contradiction: a paradox. If you cannot even tell whether a set of statements are self-contradictory, then you don’t really understand the statements; you haven’t thought them through!

Zeno’s paradoxes raise a fundamental question about the universe: Are time and space continuous like an unbroken line, or do they come in discrete units, like a string of beads? It’s a question that even today’s physicists, who are reputed to be closer than ever to a theory of everything, are struggling with. Zeno’s arguments seem absurd.

The Evolution of Civilizations

We know the arrow flies through the air, yet we may have some difficulty in explaining why or how we know. One may argue that the whole notion of fixing a point in time is absurd and that it makes no sense to say that an arrow appears stationary at any point in time. In mathematics, time is a variable that can be fixed by simply declaring it to be some number. We have formulas that tell us where the arrow is at any time t, so if we let t equal some specific time, then we should know the exact spot where the arrow is at that time.

Mysteries of time and space

Yet this means that our mathematical models of motion, space, and time are merely intellectual constructions built for the convenience of easy calculations, not for the greater purpose of representing the structure of reality. As we came to understand motion through math with greater sophistication, we shed light on Zeno’s paradoxes. But only by solving the ultimate mysteries of time and space can we definitively solve the puzzles that Zeno put forth at the very dawn of science. He was ahead of his time.

The twentieth century brought relativity and quantum mechanics. Space and time are no longer thought of as separate aspects of reality. They were united into a single four-dimensional continuum. Quantum theory suggests that some motion is not continuous. Yet we still have a hard time imagining them discretely jumping around, disrespecting our sense of continuous motion. One can’t help imagining Zeno rejoicing as his paradoxes return, no longer cast off as answered by simple calculus arguments…

So once more: if you cannot even tell whether a set of statements are self-contradictory, then you don’t really understand the statements; you haven’t thought them through!