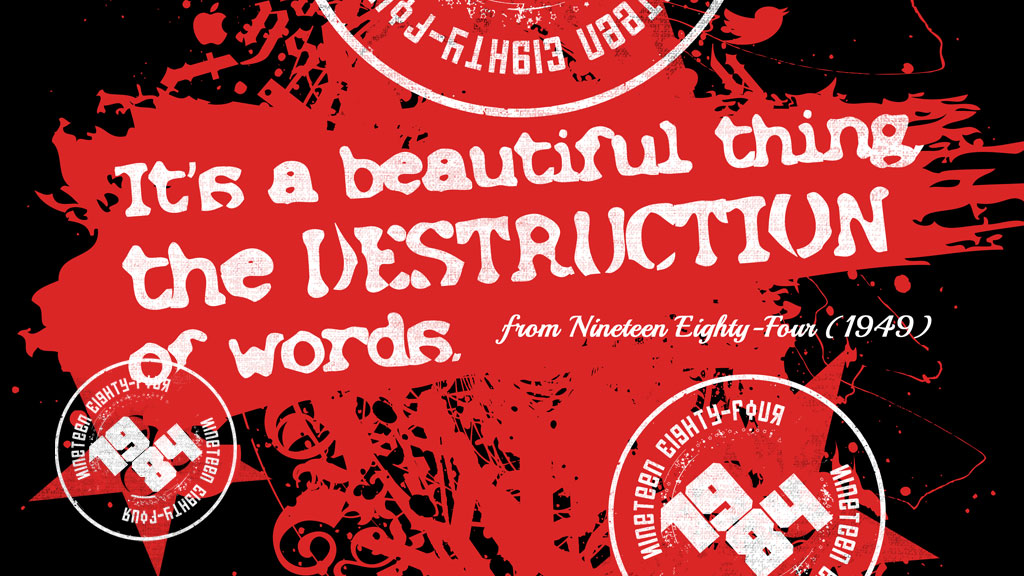 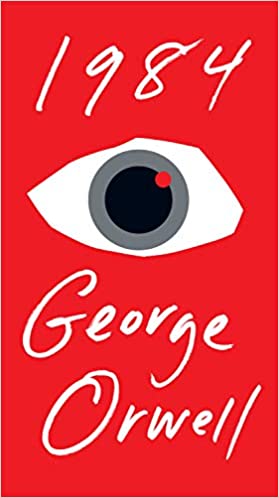 ‘It’s a beautiful thing, the destruction of words.’

In the low-ceilinged canteen , deep under ground, the lunch queue jerked slowly forward. The room was already very full and deafeningly noisy. From the grille at the counter the steam of stew came pouring forth, with a sour metallic smell which did not quite overcome the fumes of Victory Gin. On the far side of the room there was a small bar, a mere hole in the wall, where gin could be bought at ten cents the large nip.

‘Just the man I was looking for,’ said a voice at Winston’s back.

He turned round. It was his friend Syme, who worked in the Research Department.Perhaps ‘friend’ was not exactly the right word. You did not have friends nowadays, you had comrades: but there were some comrades whose society was pleasanter than that of others.Syme was a philologist, a specialist in Newspeak. Indeed, he was one of the enormous team of experts now engaged in compiling the Eleventh Edition of the Newspeak Dictionary. [.  . .]

‘How is the Dictionary getting on?’ said Winston, raising his voice to overcome the noise.

He had brightened up immediately at the mention of Newspeak. He pushed his pannikin aside, took up his hunk of bread in one delicate hand and his cheese in the other, and leaned across the table so as to be able to speak without shouting.

‘The Eleventh Edition is the definitive edition,’ he said. ‘We’re getting the language into its final shape—the shape it’s going to have when nobody speaks anything else. When we’ve finished with it, people like you will have to learn it all over again. You think, I dare say, that our chief job is inventing new words. But not a bit of it! We’re destroying words—scores of them, hundreds of them, every day. We’re cutting the language down to the bone. The Eleventh Edition won’t contain a single word that will become obsolete before the year 2050.’

He bit hungrily into his bread and swallowed a couple of mouthfuls, then continued speaking, with a sort of pedant’s passion. His thin dark face had become animated, his eyes had lost their mocking expression and grown almost dreamy.

‘It’s a beautiful thing, the destruction of words. Of course the great wastage is in the verbs and adjectives, but there are hundreds of nouns that can be got rid of as well. It isn’t only the synonyms; there are also the antonyms. After all, what justification is there for a word which is simply the opposite of some other word?

A word contains its opposite in itself. Take “good”, for instance. If you have a word like “good”, what need is there for a word like “bad”? “Ungood” will do just as well—better, because it’s an exact opposite, which the other is not. Or again, if you want a stronger version of “good”, what sense is there in having a whole string of vague useless words like “excellent” and and all the rest of them? “Plusgood” covers the meaning; or “double-plusgood” if you want something stronger still. Of course we use those forms already, but in the final version of Newspeak there’ll be nothing else. In the end the whole notion of goodness and badness will be covered by only six words—in reality, only one word. Don’t you see the beauty of that, Winston? It was B.B.’s idea originally, of course,’ he added as an afterthought.

A sort of vapid eagerness flitted across Winston’s face at the mention of Big Brother.Nevertheless Syme immediately detected a certain lack of enthusiasm.

‘You haven’t a real appreciation of Newspeak, Winston,’ he said almost sadly. ‘Even when you write it you’re still thinking in Oldspeak. I’ve read some of those pieces that you write in the Times occasionally. They’re good enough, but they’re translations. In your heart you’d prefer to stick to Oldspeak, with all its vagueness and its useless shades of meaning. You don’t grasp the beauty of the destruction of words. Do you know that Newspeak is the only language in the world whose vocabulary gets smaller every year?’

Winston did know that, of course. He smiled, sympathetically he hoped, not trusting himself to speak. Syme bit off another fragment of the dark-coloured bread, chewed it briefly, and went on:

‘Don’t you see that the whole aim of Newspeak is to narrow the range of thought? In the end we shall make thoughtcrime literally impossible, because there will be no words in which to express it. Every concept that can ever be needed will be expressed by exactly one word, with its meaning rigidly defined and all its subsidiary meanings rubbed out and forgotten. Already, in the Eleventh Edition, we’re not far from that point. But the process will still be continuing long after you and I are dead.

Every year fewer and fewer words, and the range of consciousness always a little smaller. Even now, of course, there’s no reason or excuse for committing thought crime. It’s merely a question of self-discipline, reality-control. But in the end there won’t be any need even for that. The Revolution will be complete when the language is perfect. Newspeak is Ingsoc and Ingsoc is Newspeak,’ he added with a sort of mystical satisfaction. ‘Has it ever occurred to you, Winston, that by the year 2050, at the very latest, not a single human being will be alive who could understand such a conversation as we are having now?’

‘Except—’ began Winston doubtfully, and then stopped.

It had been on the tip of his tongue to say ‘Except the proles,’ but he checked himself, not feeling fully certain that this remark was not in some way unorthodox. Syme, however, had divined what he was about to say.

‘The proles are not human beings,’ he said carelessly. ‘By 2050—earlier, probably—all real knowledge of Oldspeak will have disappeared. The whole literature of the past will have been destroyed. Chaucer, Shakespeare, Milton, Byron—they’ll exist only in Newspeak versions, not merely changed into something different, but actually changed into something contradictory of what they used to be. Even the literature of the Party will change. Even the slogans will change. How could you have a slogan like “freedom is slavery” when the concept of freedom has been abolished? The whole climate of thought will be different. In fact there will be no thought, as we understand it now. Orthodoxy means not thinking—not needing to think. Orthodoxy is unconsciousness.’

One of these days, thought Winston with sudden deep conviction, Syme will be vaporized. He is too intelligent. He sees too clearly and speaks too plainly. The Party does not like such people. One day he will disappear. It is written in his face.

George Orwell’s eerie predictions are coming true. Be like Winston Smith and make a small subversive statement with this cool T-shirt. Orwell’s 1984 fictional surveillance state is alarmingly recognizable in our modern society!

The T-shirts are censored and no longer available at Spreadshirt stores – But we’re looking for alt solutions.
https://printshop.maier-files.com/product-category/tees-and-merch/