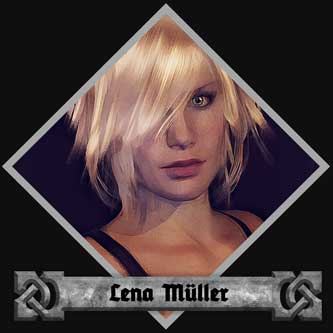 Lena is a cocky young woman and sweetheart of Dieter Vleeminckx. She's the granddaughter of Heinz Müller, a veteran of the legendary division Parzival. Born in Argentina but having the German nationality. While studying economics at the university of Heidelberg she settled in the city of Heidelberg. After her studies she got an opportunity to start working at the E.U. in Brussels. After her mother died during childbirth she was raised by her grandfather Heinz Müller.  She never knew her father who appears to be living somewhere in Canada.

When she and Dieter discover the Otto Maier diaries they start a little investigation that seems to connect both their families. By delving deeper into her ancestry she opens up “a Pandora’s box” of secrets. Sometimes history isn't what we've been told as Lena will find out soon enough.