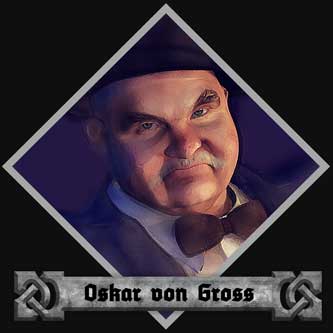 His father was on the board of directors of the Deutsche Bank from 1870 to 1900. Oskar Gross began studying law and economics in Heidelberg just before beginning military service in Berlin.

He was an imperious Prussian who would not tolerate dissent in either his personal or his business life. Politically, Gross was an ardent Pan-German who believed passionately in Germany's mission in world affairs.

Within weeks of the outbreak of World War I, Gross enlisted in the Artillery Regiment. His initial posting was against the British on the Somme; he was present at the First Battle of Ypres. He got transferred to the 30th Division of the Prussian Army where he became firm friends with the genius Otto Maier. They fought together in the battle of Zillebeke. During the entire tragedy of the war he got severely wounded two times. This made him dependent on painkillers. He received a medal for bravery.

After the war he almost lost the entire family heritage due to the hyper-inflation. This stirred up his hatred against the foreign banks and the economic monetary system. He supported the German National People's Party and strongly rejected the republican Weimar Constitution of 1919 and the Treaty of Versailles which he viewed as many others as a national disgrace, signed by traitors.

But later he also regularly collided with the new NSDAP-party, whose leaders he taunted as Neanthertals. In the mid-1920's Gross and the brilliant Otto Maier founded near Essen, Germany, Gross Konzerns. It was his dream to offer Germany total independency from the foreign monopolies and the overseas parasites as he called e.g. the Rockefellers and the European banking dynasties. He invested heavily in alternative energies and power supplies. His straight forward unsubtle statements, provocative rhetoric and revolutionary monetary views made him plenty of enemies outside as well as inside Germany.