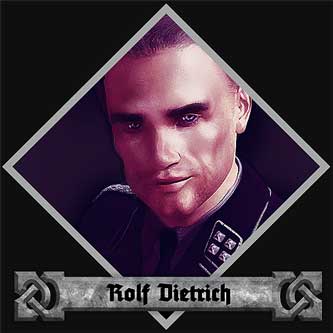 Rolf Dietrich serves as the main protagonist in Maier files. He is Sturmbannfuehrer (Major) of a dissident S.S.-unit, Parzival. He was given the task of protecting a mysterious box.

His father was a strict, old school Prussian who traveled the world as an art and antique dealer. Rolf lived as a child with his mother for 3 years in Alexandria, Egypt. Father Dietrich sent the youngster Rolf to an hostile English boarding school where he became friends with some despised Irish boys. He joined the Waffen S.S. in 1937 and was recruited as secret agent by the secret society 'House of the Chalice' in 1938.