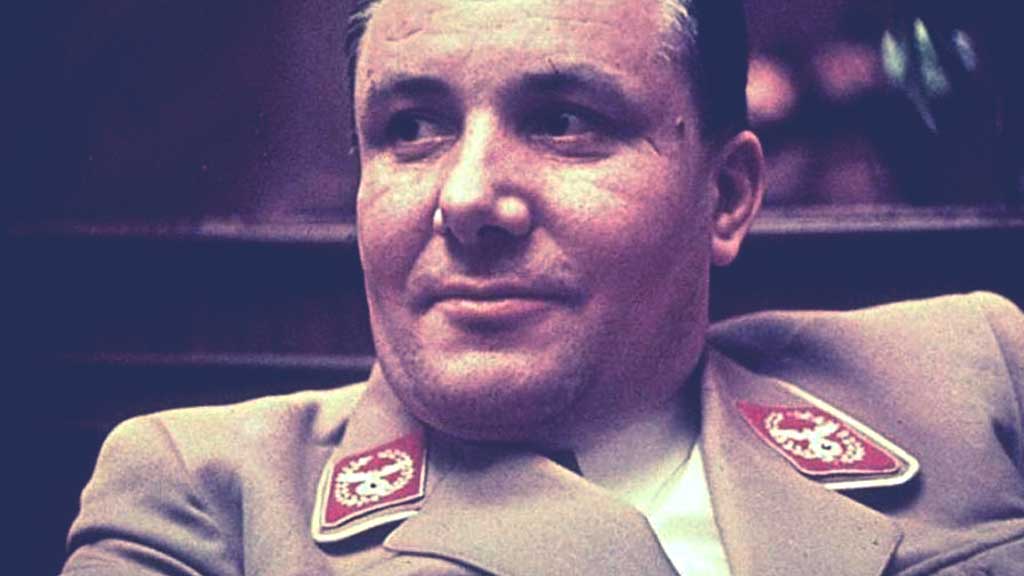 He plays a small role in the story about the disappearance of Otto Maier and Maier files, Martin Bormann.
In May 1941 Martin Bormann was made Party Chancellor of the National Socialist Party, a position he utilized to become the Third Reich’s principal bureaucrat. He was also Hitler’s right-hand man, his personal secretary and his bookkeeper, and stood with the Führer until the end.

The last incontestable sighting of Bormann was in the early hours of 2 May 1945, on Invalidenstrasse Bridge in Berlin, as he attempted to escape from enclosing Russian troops. Post-war enquiry by the Allies speculated that Bormann had committed suicide or been killed near that bridge, but in the absence of a body there could be no confirmation.

For twenty years rumours flew that Bormann was alive and well and living in differently Germany, South America and Spain. Then, in 1971, Reinhard Gehlen released his memoirs, Der Dienst (The Service), which stated as fact that Bormann had survived the war and hidden from view in the USSR, where he had only recently died. Unlike other Bormann spotters, Gehlen had pedigree.

He was the ex-chief of German intelligence on the Eastern Front and, with the aid of the OSS and the Sovereign Military Order of Malta, had taken on the job of spy chief in the brand new Bundesrepublik Deutschland (Federal Republic of Germany). Gehlen affirmed that there existed film of Bormann watching sports with Soviet bigwigs. And he made another sensational claim: Bormann was the Russian spy code-named Werther who had infiltrated Hitler’s military planning sessions, and passed on the top-secret knowledge to Moscow that Russia needed to win Stalingrad, Kursk and other battles on the Eastern Front.

Gehlen’s identification of Bormann as Werther received a boost in 2000 with the publication of Hitler’s Traitor: Martin Bormann and the Defeat of the Reich by Louis Kilzer. So fast was intelligence passed from Hitler’s ops room to Stalin’s, Kilzer posited, that it must have come from someone right at Hitler’s side: Bormann. If Bormann was Werther it makes it natural that Stalin would have given him sanctuary after the war – hence the sightings of him in the USSR. There is, however, forensic evidence that Bormann died during the battle of Berlin in 1945.

In 1972 construction workers at Lehrter Bahnhof dug up two bodies, one of which was identified as Bormann’s by his wartime dentist Dr Hugo Blaschke. (The other body belonged to SS doctor Ludwig Stumpfegger.) The bodies were found just 40 feet (12m) from where Albert Krumnow, a postal worker, had previously claimed to have buried Bormann and Stumpfegger.

In 1998 DNA tests on the skull of one of the Lehrter corpses confirmed it as Martin Bormann’s. Traces of glass in the jaws suggested the two men had committed suicide by biting on cyanide capsules. The positive identification of the Lehrter corpse as Bormann’s holes the “Bormann was Werther” theory.

So who was Werther? Bernd Ruland, a teleprinter supervisor at Hitler’s wartime radio centre at Zossen, suggested in a 1973 book that Werther was not one but two people: two female teleprinters at Zossen. Almost inevitably, the forensic identification of Bormann’s corpse has not killed off the conspiracy theories. In his book Doppelgängers, Hugh Thomas suggested there were forensic indicators that Bormann died later than 1945, notably that the condition of the teeth were those of a man older than 45 (Bormann’s age in 1945) and that there appeared to be dental work in excess of the 1945 record.

Moreover, the skull contained traces of a volcanic red clay not found in Berlin but common in Paraguay – where there had been several “Bormann sightings”. Since DNA testing proved the skull to be Bormann’s, the necessary inference was that Bormann did survive the war and was reburied in Berlin by accomplices to give credence to the story that he fell in 1945 …