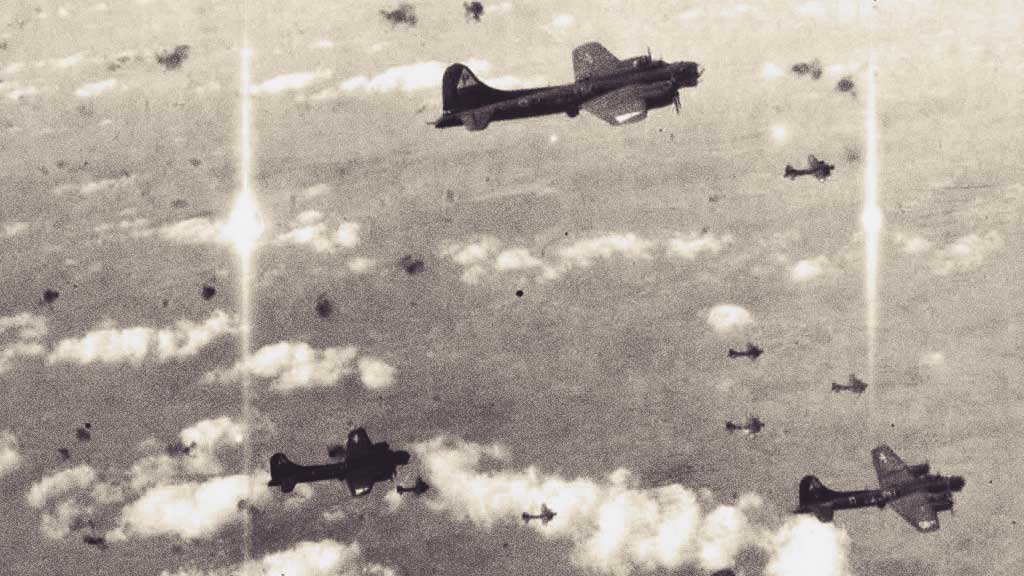 For those who didn’t read part one,  Foo fighters is a name given to small, round flying objects which followed Allied bombers over Germany during the latter phases of the air war.

There are also some reports of foo fighters in the pacific theater of the war. Sometimes they would appear singularly but more often in groups, sometimes flying in formation. By day they appeared to be small metallic globes. By night they glowed with various colors. These objects attempted to approach Allied bombers closely. This scared the bomber crews who assumed they were hostile and might explode. Upon taking evasive maneuvers they found the foo fighters would keep pace with them in some instances. The Foo fighter is the German “Feuerball”, which means fireball.

The fact is that foo fighters were German-built flying weapons of war. The fact is that they were the very first modern UFOs. And finally, the fact is the government of the United States has known this all along and kept these facts from public for all these years.

Yet the U.S. military has never been willing to publicly acknowledge these facts. Why is this? What issues of national security could possibly be compromised with such a disclosure over more than a half-century later? The sad truth is that the private ‘information’ or disinformation sector is also guilty in of a cover-up. Why do they contribute to the denial of the German origin of this technology?

Flying saucer books of the 1950s usually mentioned foo fighters and recounted the sightings of Allied servicemen. Later, due to the extraterrestrial hysteria, publications tended to omit descriptions of foo fighters, preferring to begin the tale of flying saucers with Kenneth Arnold in 1947. Kenneth Arnold was the pilot who claimed that he saw a string of nine, shiny unidentified flying objects.

In modern times, if the foo fighters are mentioned at all by mainstream UFO magazines or books, they try to confuse the issue of the origin of foo fighters in one of three ways. First, they imply that both sides in World War Two thought foo fighters were a weapon belonging to the opposite side. They may cite as a source some German pilot obviously “out of the loop” who claims the Germans did not know their origin. Second, they attempt to advance the idea that foo fighters are still unknown and a mystery or possibly a naturally occurring phenomenon. Third, they advance an extraterrestrial origin.

Vesco is by far the best source concerning the foo fighter which he calls “Feuerball”.  He was an Italian aeronautical engineer. He attended the University of Rome and, before WWII, studied at the German Institute for Aerial Developement. During the war, he worked with the Germans at the Fiat Lake Garda secret installations in Italy.

He describes the Foo fighter as a radio controlled missile, built at an aeronautical establishment at Wiener Neustadt (Austria) with assistance of the Flugfunk Forschungsanstalt (Radio-Flight Research Installation) of Oberpfaffenhoffen. The project was under the control of an SS technical division.

It was armored, circular in shape, resembling the shell of a tortoise. A special flat, circular turbojet engine powered the device. After ground personnel guided them to the proximity of the target, an automatic infrared tracking device took over control. The circular spinning turbojet exhaust created a visual effect of a bright, fiery ball in the nighttime sky.

Within the craft itself a klystron tube pulsated at the frequency of Allied radar making it almost invisible to those remote eyes. A thin sheet of aluminum encircled the device immediately under the layer of protective armor.

But it was electrically insulated from the armor. When a bullet pierced the armor and the thin aluminum sheet, it formed a circuit which had the effect of triggering the Feuerball to climb out of danger at full speed.

Once within range, special chemical additives mixed with the fuel mixture which caused the air in the vicinity of the device to become ionized. This meant that it was possible to conduct electricity directly through the air itself. Any ignition based engine coming into range of the ionized region would become useless, misfiring, stalling and eventually crashing.

Vesco goes on to say that with the advance of the Soviets into Austria the production facilities for the Feuerball were moved to a number of underground plants in the Black Forest run by the Zeppelin Works.