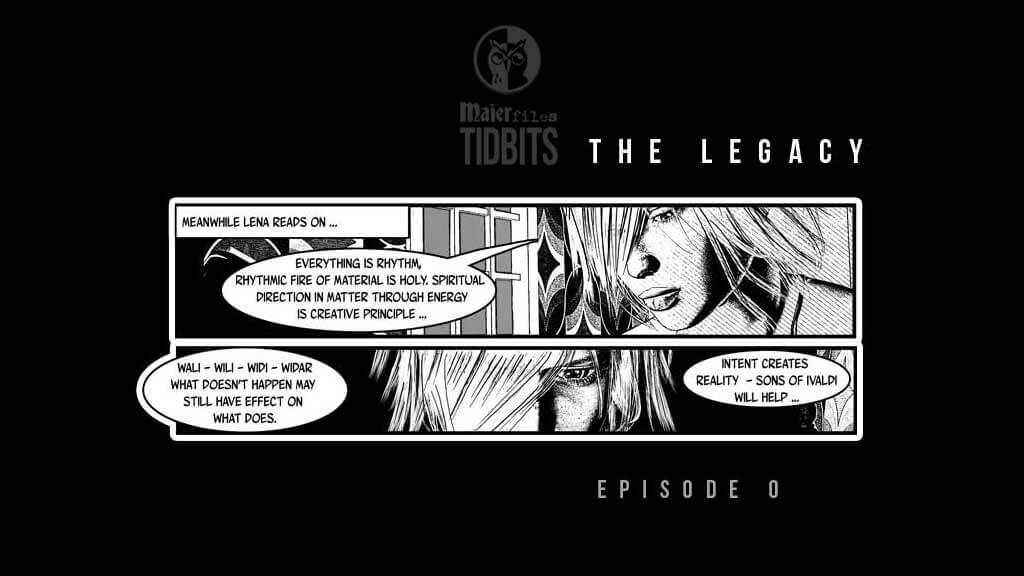 Otto Maier’s secret texts. Is there more than meets the eye? Wali – Wili – Widi – Widar. In Eddic mythology Odin is avenged on the Fenris wolf by Widar. Wili is named alongside We as Odin‘s or Wotan’s brother. According to the third poem in the Poetic Edda, the vafthrudnismal (Vafþrúðnismál). Widar and Wali (who avenges Baldur and Hödur) rule over the sanctuary once Surtur’s ﬂames have gone out. He is also called Ali and is said to be the son of Odihn and Rind. The names indicate an inner relationship between Wali-Wili-Widi-Widar. Common to them all is the “W” as a sign of turning in “Wendung”.

Nobody knows for sure but it has much to do with transformation and transmutation, a common concept in alchemy. It’s a big riddle where everything is interwinded. We will probably come closest to the concepts hidden behind these names as one of the ancient theories of von Bülow explains that:

stands for Life’s changing the ego toward unity. Wal is freedom, the freedom to choose (as in German; die Wahl­frei­heit). It’s at the same time associated with the realm of the dead -Walhalla, the seat of the Einherjar. In Norse mythology, the Einherjar (Old Norse “single, individual fighters”) are those who have died in battle and are brought to Walhalla by Valkyries. The Einherjar prepare daily for the events of Ragnarök, when they will advance for an immense battle at the field of Vígríðr; the battle which the “ein” this time refers to single-time. Scholarly theories have been proposed etymologically connecting the einherjar to the Harii (a Germanic tribe attested in the 1st century AD), the eternal battle of Hjaðningavíg, and the Wild Hunt. But that’s for another post.

Life’s changing from one ego to another through the will of light.

Generational change from one ego to another through knowledge of the tree of life, i.e., ‘of the organic nature of all changes.’

The turning of the ego toward generating the rhythm of unity. His sign is the eagle (Aar) which hunts for ﬁsh among the rocky cliffs. He flies above solidity (rocks) and the clean, ﬂuid element of life (symbolised by a ﬁsh). He therefore also rules over the processes of growth. Unsown ﬁelds bear fruit for him.

The Sons of Ivaldi

In Norse mythology, the Sons of Ivaldi are a group of dwarfs who made Skidbladnir, the ship of Freyr, and the Gungnir, the spear of Odihn, as well as golden hair for Sif to replace what Loki had cut off. Based on Skáldskaparmál, after these items were created Loki made a bet with a dwarf, Brokkr, that his brother Eitri (or Sindri) would not have the ability to craft objects to meet the top notch quality of those exhibited by the sons of Ivaldi. This contest led to the creation of the boar of Freyr (Gullinbursti), the ring of Odin (Draupnir) as well as the hammer of Thor (Mjolnir), which were judged by the gods to be even more marvelous compared to the others. Therefore, Brokkr had won the bet.

The account of this tale presented in Skáldskaparmál fails to disclose the names of Ivaldi’s sons, nor how many there were, and they remain conspicuously absent after their initial mention in the stanza. In Grímnismál 43 they’re mentioned once more as the creators of Skidbladnir, “the greatest of all ships”, likewise this drops no extra light. And so, their identities are simply a matter of scholarly hypothesis.

In the eddic poem Hrafnagaldur Óðins, stanza six, Idunn is identified as an “elf” (alfar) and the “youngest of the more aged children of Ivaldi.” This indicates that Ivaldi had two sets of offspring, most likely by different mothers. Therefore Idunn is a sister of those celebrated, famous smiths, the Sons of Ivaldi.