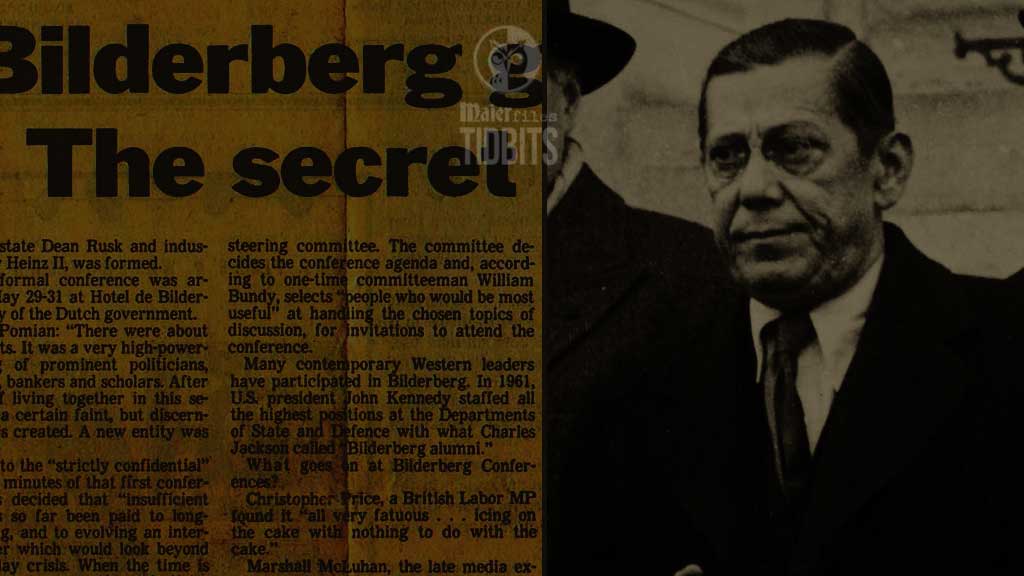 and a behind-the-scenes political wheeler-dealer

Dr. Joseph Hieronim Retinger is perhaps one of the most mysterious figures of the twentieth century. It is he who is credited with being the father of Bilderberg. He is also credited with being the motivating force behind the European League for Economic Cooperation, the European Movement, and the Council of Europe. A compulsive intriguer and behind-the-scenes political wheeler-dealer, Retinger became known in his circles as a “grey eminence”.

At different times he was rumoured to have been an agent for the Socialist Internationale, the Freemasons, the Vatican, and the government of Mexico. Others saw him as an irresponsible meddler and a penniless adventurer. Even his friends, people like former Italian diplomat Pietro Quaroni, ask, “Did we really know him?” Denis de Rougemont, head of the European Cultural Center (which Retinger founded), worked with Retinger for over thirteen years, yet he too asks, “How well did I really know him?” But on one point they all agree: Retinger was one of the best informed people in the world.

Retinger was born in Kraków, Poland (then part of Austria-Hungary), the youngest of four children. His father, Józef Stanisław Retinger, was the personal legal counsel and adviser to Count Władysław Zamoyski. When Retinger’s father died, Count Zamoyski took Józef into his household. Financed by Count Zamoyski, Retinger entered the Sorbonne in 1906, and two years later became the youngest person to earn a Ph.D. there at age twenty. He moved to England in 1911.

A Polish patriot at heart, Retinger struggled to make connections and penetrate inner government rings as political agent and head of the Polish Bureau in London. Retinger obtained a reputation for being both cheeky and crude. He rapidly made numerous enemies. During the years of World War I Retinger shuffled backwards and forwards between London and Paris. On one spring morning in 1918 while in Paris, Retinger was summoned by M. Jules Pams, the French Interior Minister. Due to certain unspecific intrigue typical of Retinger, he was ordered to leave the Allied nations or deal with an official expulsion. Angered, Retinger departed that very afternoon on a 4 pm train to Spain.

He spent the next nine months in virtual poverty, mostly in Barcelona. Then he one way or another he was able to obtain passage on a cargo boat destined for Havana Cuba. He rapidly got bored with Havana and moved on to Mexico where he once more engaged himself in the local political intrigue of the day. He helped build up a secret society consisted of young Mexican patriots, called the “Action Committee”.

It was Retinger who later on advised the Mexican Government to nationalise American-owned petroleum wells and who helped expose an American oilmen conspiracy to provoke a war between the United States and Mexico. Next the ever-adventurous Retinger smuggled himself across the Rio Grande and into Texas. He boarded a train to Washington, D.C. and looked up Felix Frankfurter, obviously a good old acquaintance, upon his arrival.

In the early 1920s, Retinger carried out various secret missions for President Obregon. 1924: he established the first congress of Latin American trade unions. In Retinger’s memoirs there is addititionally proof of a secret mission to the Vatican to fix up relations between Mexico and the Church. It was in 1924 that the concept of European unity first occured to Dr. Retinger. With British Member of Parliament E. D. Morel, he attempted to establish a clandestine organisation with the purpose of promoting European unity.

With World War II coming on strong, Retinger in 1939 joined forces with General Sikorski and the Polish Government in Exile in London. He became Sikorski’s most trusted political advisor. In July 1943, Sikorski died tragically in a plane crash.

Retinger teamed up with General Sir Colin Gubbins, head of the super-secret S.O.E. Retinger, although 56 years of age, was parachuted into German-occupied Poland. The goal of the mission was to persuade the Polish underground forces and political leadership to accept that it was imperative to start negotiating with the Soviets, as they were now to be considered Poland’s allies and had the full support of the British and Americans.

Campaign for a unified Europe

At the end of the war, Retinger, with greater passion resumed his campaign for a unified Europe. On May 8, 1946 he addressed the Royal Institute for International Affairs and from this speech grew the idea of a European Movement.

Working closely with Paul Van Zeeland, the Belgian Minister for Foreign Affairs, and Paul Rijkens of Unilever, Retinger organised the First Congress of Europe at The Hague in 1948. From it sprang the Council of Europe and various national committees of the European Movement.

As a result of this initiative, an organisation called the American Committee on a United Europe was formed. The A.C.U.E. was officially launched during a luncheon in honour of Winston Churchill on March 29th, 1949. Most significant about A.C.U.E. was its leadership: Its Chairman was William Donovan, former Director of the Office of Strategic Services (the wartime intelligence agency  of the United States). Its Vice-Chairman was Allen Dulles, Director of the newly-formed Central Intelligence Agency.

The loss of liberty

Its Secretary was George Franklin, then Director of the Council on Foreign Relations (and now “Coodinator” of the Trilateral Commission, examined in Part Two of this book). Its Executive Director was Thomas Braden, head of the CIA’s division on international organisations. Shortly after its inception, A.C.U.E. began to send money to the Brussels headquarters of the European Movement, of which Retinger was now Secretary General. According to John Pomian, Retinger’s personal assistant from 1948 until Retinger’s death in 1960.

“Retinger always believed that public opinion follows the lead of certain individuals.” Perhaps in this spirit, Retinger, in 1952, went back to Paul Van Zeeland and Paul Rijkens, his European Movement associates, with the suggestion of organising unofficial meetings of important people from NATO countries. The purpose he visualised for such a forum was 1) to help promote the case for European unity and 2) to form an Atlantic alliance.

Rijkens liked the idea and he arranged for Retinger to meet Prince Bernhard of the Netherlands. Bernhard, it was felt, would be the ideal figurehead for such a forum because of his royalty and ‘apolitical’ standing. Together, Prince Bernhard and Dr. Retinger journeyed to Washington, D.C. and lobbied the support of General Walter Bedell Smith, Director of the CIA, and Charles Jackson, a national security assistant to President Eisenhower.

An American committee was formed. Its original members included John Coleman, Chairman of the Burroughs Corporation, David Rockefeller of Chase Manhattan Bank, Dean Rusk, head of the Rockefeller Foundation, Henry Heinz II, of 57 varieties fame, Joseph Johnson, President of the Carnegie Endowment for International Peace, and George Ball. The first formal conference was arranged for May 29-31 at Hotel de Bilderberg in the small Dutch town of Oosterbeek, courtesy of the Dutch Government and the American CIA.  The Bilderberg-group was born.

A good read on the subject: