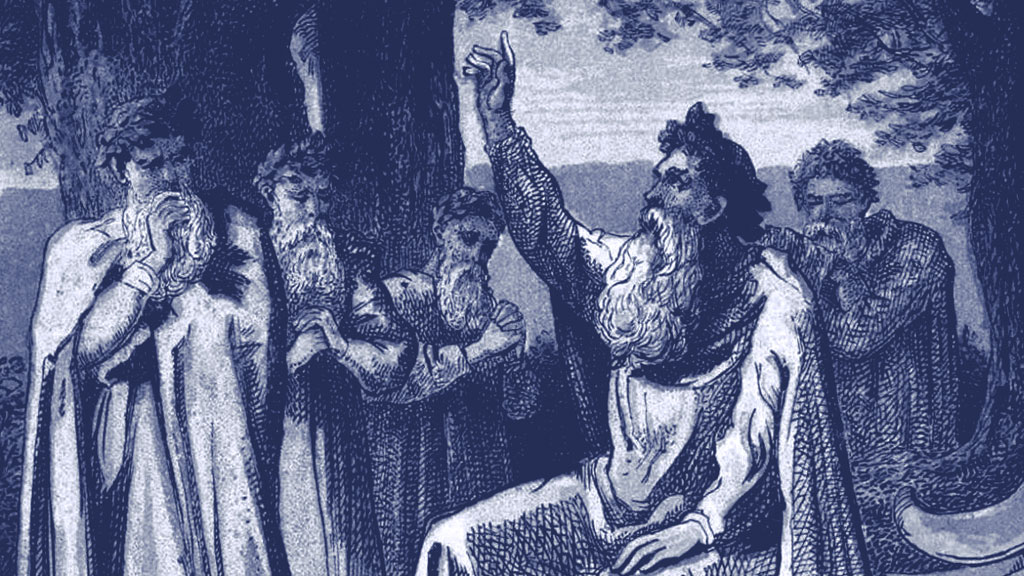 The Druids gathered and important questions were to be answered via divination. The means of determining the future? A human victim who was to be back-stabbed. From the movements of his death throes, the future was revealed to the forest magicians.

As it is the practice of modern armies to attempt to destroy the intelligence-gathering capabilities of their enemies, so was it the practice in ancient days. Where magic was the means of intelligence gathering, there the enemy soldier put his torch, swung his sword, wreaked his havoc.
In a Roman attack on a Druid enclave in A.D. 59, the soldiers cut down the sacred oak groves that surrounded the bloodstained altars upon which the sacrificial victims lay.

The Celtic magicians, killed by the Romans, no longer ripped open bodies, thereupon to learn from the inner organs their military destiny. Their destiny had been determined by the blades of Rome.

Frazer, in his classic The Golden Bough, spoke often of the magical Law of Homeopathy. This was the doctrine that things that appear similar may affect each other, and that symbolic appearances and similarities might actually be useful in reality.

As the human head is the center for perception and analysis, the sine qua non for intelligence gathering and military strategy, the Celts often cut off the heads of their enemies and mounted them on poles. Or hung them about their horses’ necks, or placed them on their village gates.

It was believed that the head contained the spirit and power of the enemy. Ergo, the current possessor of that head would have the same power. It was symbolic logic—of a sort.

An eye towards survival

It must be remembered that in many of its functions, the brain is an interpreter of symbols. It is a correlating mechanism, looking for patterns, associations, ever with an eye towards survival.
Once this is realized, it is not so strange that primitive man might, in search of the hidden future of his tribe, seek the answer in the hidden organs of a man.
It is not beyond credibility that, observing the head to be the director of a man’s actions, a warrior would seek to possess this head as the situs of sense and cunning of his enemy. It was as if his classified document files had been captured.

Is it really different?

But of course, we of the late twentieth century are beyond all of this primitive belief and symbolism, aren’t we? Oh yes, our generals have stars on their shoulders, and we have rockets called Jupiter, or Thor, and space programs called Mercury and Apollo, but that’s different.
And some of our more enthusiastic infantry in Vietnam cut off the ears of the Viet-Cong and kept them for trophies. But that is quite another thing from cutting off the heads of your enemies, no?
Have we traveled so far from the ancient ways in our modern wars, or is the military-occult complex still deeply entrenched in our martial societies, along with our fascination for high-tech tools of mass destruction?
Our Druid friends were devoted students. They studied for decades, learning the oral traditions of their societies, their magic, their astrology. In Gaul Caesar, observed many Druid seminaries. These Druids supposedly had the power to render themselves invisible, to cause death via magic spells, and to produce an enchanted sleep.

It was an ancient attempt at using what today would be called nonlethal and stealth technologies.

The Druids were the psychic soldiers of their day. Often accompanying an army to give aid—via their magical powers—in the destruction of the enemy. Their seers had marched along with the troops in the aforementioned invasion of the Greeks, yet were bested by the Oracle at Delphi.

The psychic exploits of the ancients with respect to their military endeavors are found in scraps, segments of rotting documents and weathered stones. There is not much left of the tales to be told. However, we do have information on their techniques of psychic spying …

src. The Psychic Battlefield: A History of the Military-Occult Complex