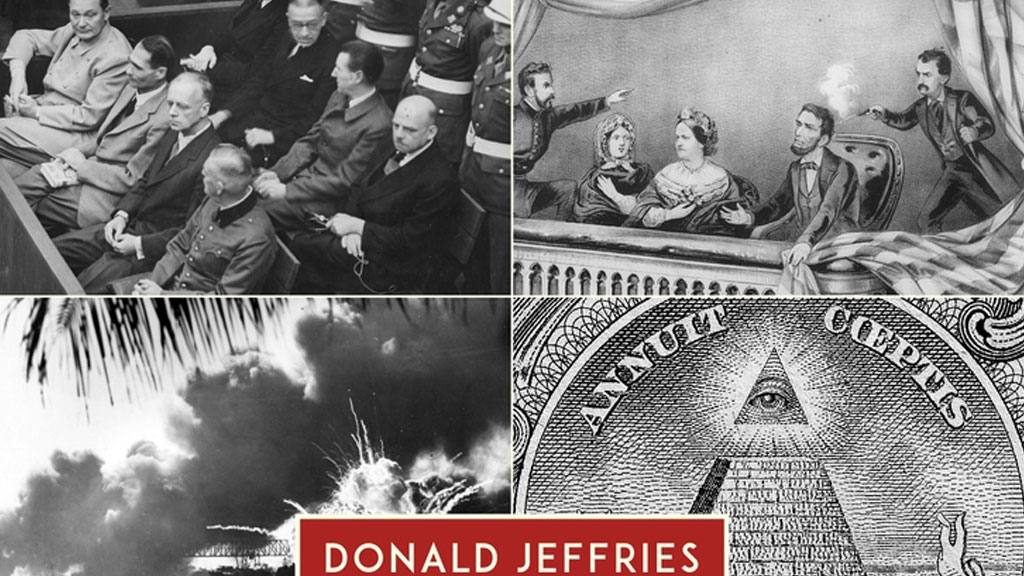 Crimes and Cover-Ups in American Politics 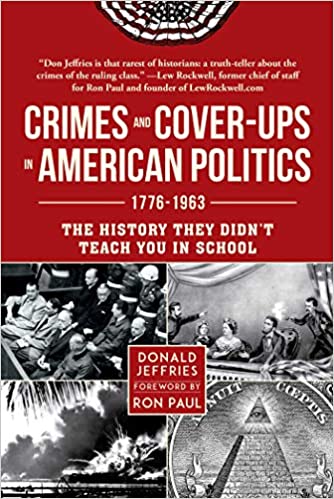 Crimes and Cover-ups in American Politics: 1776-1963
Available at Amazon

Crimes and Cover-ups … The way history is presented to Americans, from the youngest schoolchildren to doctorate-level Ivy Leaguers, mirrors the way news is presented to the public. Much as it is difficult to find a single issue or event which the mainstream media has reported on accurately, it is just as difficult to find any historical event, or historical figure, portrayed honestly by establishment historians.

We still see everyone from history professors to late-night comedians referring to any opponent of the establishment with a mean-spirited, impossibly caricatured negativity. Dismissing opposition with juvenile name-calling is their primary method of debate. In their world, black is white and up is down. Freedom is slavery.

Thus, the most bloodthirsty, consistent warmongers in any era, from Abraham Lincoln to Teddy Roosevelt to Woodrow Wilson to Franklin D. Roosevelt to Harry Truman to Lyndon Baines Johnson to Bill and Hillary Clinton to Barack Obama, are equated with “peace” and looked upon favorably by academics and the entertainment world.

Henry Ford, who was a pacifist and tried desperately to singlehandedly stop our participation in World War I, is dismissed as an anti-Semite.

Robert A. Taft, who was a progressive on most issues and advocated a non-interventionist foreign policy, is recalled as “Mr. Conservative” and denigrated as being hopelessly behind the times. An unwillingness to meddle in the affairs of other nations, to occupy and kill foreign civilians, is considered “outdated.”

Instead, we are treated to the “progressivism” of a Teddy Roosevelt, who was a vile bigot, a textbook eugenicist, and never met a war he didn’t want America to become engaged in. Meanwhile, a sincerely enlightened man of his time, and one of history’s finest intellects, Thomas Jefferson, is ridiculed as a racist. In the eyes of the court historians, the “greatest” presidents are those who’ve most completely trampled the civil liberties of their citizens, and been most eager for war.

Person of the Century

Albert Einstein was named TIME magazine’s “Person of the Century.” Historians gloss over the fact that his 1905 treatise on the theory of relativity listed no references. He has been accused by conspiracy theorists of being a plagiarist. It’s well known that Einstein was dramatically slow to develop as a child; he didn’t speak until the age of three and never learned to tie his shoes.

He failed an entrance exam to a simple technology school in Zurich, and worked for years as a menial clerk in a patent office. True genius Nikola Tesla strongly disagreed with Einstein, calling his relativity theory “a mass of error and deceptive ideas violently opposed to the teachings of great men of science of the past and even to common sense . . . the theory wraps all these errors and fallacies and clothes them in magnificent mathematical garb which fascinates, dazzles and makes people blind to the underlying errors. . . . Not a single one of the relativity propositions has been proved.”

The criticisms of those published in the 1931 book A Hundred Authors Against Einstein were discounted on the grounds that they weren’t capable of understanding such complexity.

Today, no criticism of Einstein is allowed in polite society. Einstein was a proponent of world government and was instrumental in convincing Franklin Roosevelt to fund nuclear research. Einstein is another secular saint of our civilization; the Abraham Lincoln of the scientific world.

Everywhere, convoluted, simplistic explanations for the most important historical events are promulgated, from the halls of academia to mainstream television networks. We are asked to accept the most fantastic concepts imaginable, all under the general premise that our leaders are trustworthy and have our best interests at heart. Public vitriol is channeled towards cardboard villains that more often than not appear to have been actual “good guys” fighting a corrupt system. The most awful characters imaginable are propped up as “heroes.” All that’s missing is an official Two-Minutes Hate, and an imaginary Goldstein as opposition leader.

When Ronald Reagan called his glittery new bomb a “peacekeeper,” he wasn’t inventing Orwellian doublethink. After all, the establishment continues to depict the murderous dropping of atomic bombs on Hiroshima and Nagasaki as altruistic efforts to save more lives.

And our leaders show little compunction about lecturing Iran and other nations about developing nuclear weapons, under the rationale that such regimes are too “unstable” to be trusted with such power. Hypocrisy doesn’t quite seem to cover the chutzpah there. America remains the only nation to date to use nuclear weapons on a foe. And our leaders are growing more aggressive about advocating the use of nuclear weapons again when “necessary,” while in the same breath forcing others to undergo inspections and forbidding them from developing such programs.

Much as the only scandal that appears to have been investigated to any degree by mainstream journalists throughout American history was Watergate, the only war which modern-day “liberals” appear to have opposed to any large degree was Vietnam.

We appear to inescapably be, in the words of General Smedley Butler, perpetually waging war, while perpetually proclaiming our desire for peace. Historically, the “liberals” of their time were adamantly in favor of the Civil War, the Spanish-American War, World War I, and World War II.

Most “liberals” during the Cold War era managed the exceptional balancing act of supporting the massive military buildup against the new communist “enemy,” while simultaneously attacking any aggressive anti-communist. Far too many sincere antiwar advocates, in every era, have been labeled as “anti-Semitic,” as if to perpetuate the discredited stereotype that “the Jews” are responsible for all wars.

This battle has been waged for a very long time. Most of the common people seem unaware that they are being constantly besieged. Napoleon Bonaparte summed up his motivation, and the motivation for all rulers and would-be rulers: “There is only one thing in this world, and that is to keep acquiring money and more money, power and more power. All the rest is meaningless.”

Those of us who expose rampant corruption are not simple conspiracy theorists. We’re actual citizen journalists, doing the work that highly-paid professionals won’t do. J. Edgar Hoover, of all people, defined the mindset we confront perfectly when he said, “The individual is handicapped by coming face to face with a conspiracy so monstrous he cannot believe it exists.” Although he was speaking specifically about communism, the point is applicable in the broader sense; most people simply cannot accept the reality of the broken, criminal system that rules us.

It is difficult for everyday people to accept the fact they’ve been lied to so extensively. They cling to the comfortable myths about Abraham Lincoln and other heroes of our decaying culture. “Not everything is a conspiracy,” they’ll sigh with exasperation. I have studied American history for decades, and I’ve found very little in establishment history books that is factual.

There is instead a desperate justification for the actions of a William Sherman, or a Ulysses S. Grant, or a Theodore Roosevelt. The narrative must be defended at all costs. The mantra is that History, like the universe itself, is a product of random happenstance.

Nothing is planned or created. All events must be interpreted through a present-day prism, utilizing a corrupt process that turns true liberals into “racists,” and bigoted eugenicists into “liberals.”

src. – Donald Jeffries. (Crimes and Cover-ups in American politics) A must read!

Jeffries spares no one and nothing in this explosive book Crimes and Cover-Ups . The atrocities of Union troops during the Civil War, and Allied troops during World War II, are documented in great detail. The Nuremberg Trials are presented as the antithesis of justice.

Crimes and Cover-Ups in American Politics is an eye-opening look at the real history of how the political class, aided and abetted by special interests, has betrayed the principles of America’s founding for their own power and gain. I can’t imagine anyone reading this book and not wanting to join the ongoing peaceful revolution to restore individual liberty, free markets, and a foreign policy of peace, friendship, and trade with all. – Ron Paul.