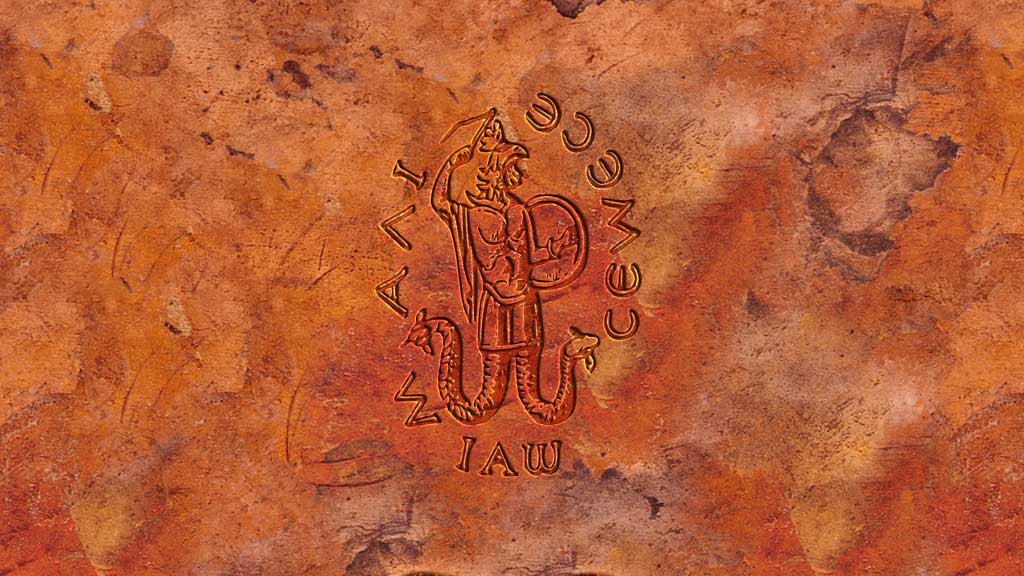 Carl Jung had written extensively on Abraxas. In his 1916 book called The Seven Sermons to the Dead, Jung called Abraxas a God higher than the Christian God and Devil that combines all opposites into one Being. Abraxas was a polymorphous world spirit which permeates — or even encompass — the very fabric of existence.

the hermaphrodite of the earliest beginning …

the lord of toads and frogs, which live in the water …

abundance that seeketh union with emptiness.

In ancient times they depicted Abraxas on talismans. Usually Abraxas looked like a creature like man with the body of a human being. He had the head of a rooster and his legs were serpents that curved upwards. In one hand he held a shield and a flail-like instrument in the other.

The image of Abraxas was carved onto stones (called Abraxas Stones) and the stone used as a magical amulet. Occasionally Abraxas will appear driving a chariot drawn by four horses; these horses represent the elements.

Coincidence or not, a similar symbolism occurs in the tale of Melusine of Anjou. Melusine also known as Melusina, Melouziana de Scythes, Maelasanu, and The Dragon Princess. She entered literary history in the book Roman de Melusine written in 1393 by Jean d’Arras. The story is a mix of fiction and fact, commissioned by the Duke de Berry, a French noble who was brother to King Charles V.

He wanted to uphold the proprietary claims to Lusignan and Anjou with this family history. In this story Melusine’s mother was a Presine fairy who charmed Elinas, the king of Scotland. The result was their daughter Melusine. Half fairy and half princess, Melusine wandered over to the Continent and eventually met up with Rainfroi/Raymond in the forests Anjou. They met while he was out boar hunting. Overcome with her beauty, he took her hand in marriage, and many adventures ensued.

As a result of this book, Melusine was subsequently featured in medieval tales across Europe. Sometimes the tales depicted her as a mermaid, a water sprite, a fairy queen, a fairy princess, a dragon princess, and a forest nymph. She came to represent any magial creature who marries a mortal man.

Yet there exist another story. In this story the Count of Anjou, who had Templar links, was unmarried and lonesome. One day the lonely Count of Anjou mysteriously brought home from the crusade a beautiful woman called Melusine. They married and were very happy. Melusine was a kind, and a good mother, and the people loved her even though no one knew anything about her background.

However, one thing about her confused the people. Although she attended church on Sunday, she never took the Eucharist, the ‘body’ and ‘blood’ of Christ. When this was brought to the Count’s attention he ordered his guards to ensure that she stayed for the whole service and took the Eucharist.

The next Sunday, Melusine attempted to excuse herself from the church just before the Eucharist. But the guards stopped her and, just as the priest was about to administer the holy rite, she let out a loud shriek, turned into a dragon and took off with her two children. A remarkable tale!

Varying with your perspective, Abraxas is a choice between an Egyptian Sun God who was accepted by the first Christian Gnostics, and a demon from the pits of Hell. This demon was tightly connected with Lucifer, despite the fact that there is certainly a reason for the former. Because he was not demoted to the ranks of a demon until the Middle Ages.

Abraxas was no average god, however. He is the Ruler of the First Heaven. Thus he owned dominion over the cycles of birth, death, and resurrection.

Remarkably the Knights Templar used the Abraxas symbol on their seals. No one knows precisely why this symbol was of particular significance, but a hidden secret within the name “Abraxas” may provide a clue. In Greek, the 7 letters are the initials of the first 7 planets in the Solar System. The original letters of Abraxas in Greek spelled ΑΒΡΑΞΑΣ.
See also this article about the Templars and Baphomet. https://www.maier-files.com/baphomet-and-the-templars/

If we apply numerology to the name then it adds up to 365. Not only is the number three hunderd sixty five the number of days in a year but the early Gnostics believed that it was also the number of the spirits or Archons and emanations from God.

Abraxas is the master of all initiates, or sky-men. He is the astral serpent on the tree who hands the illumination of both good and evil to Adam and Eve whose eyes are then opened. The very king worm who rules this world, that is both creator and destroyer. The maker of good and evil rolled into one persona, that being the human population in which Abraxas rules over the world like the Gnostic Basilides described; “the greatest God”.

Does this mean Abraxas is the Demiurge and the great Archon – Archon Magnus? The early founders of the Catholic Church such as Irenaeus and Epiphanius said that the world, as well as the 365 heavens, was created in honour of ‘Abraxas’. Moreover to Irenaues not the Maker of the world sent Christ ‘Abraxas’. Added to the mix is the speculation that the supreme magical word, “Abracadabra,” may derive from the name Abraxas.

Sir Godfrey Higgins, in his book the Celtic Druids had said that the word Abracadabra may have come from the Druids, and he had also shown that the numerical equivalent of the spelling of the name Abraxas has seven letters that equal, as mentioned already, in both the Greek and Phoenician language to 365.

Higgins had said that the word “Abracadabra” is a later corruption of the sacred Gnostic term ” Abrasax “, the latter itself being a still earlier corruption of a sacred and ancient Coptic or Egyptian word: a magic formula which meant in its symbolism “Hurt me not “, and addressed the deity in its hieroglyphics as ” Father.”

When the Templars looked into the Bible something became clear to them. The teachings of Jesus opposed diametrically the Old Testament. Therefore it was impossible that they ever could belong together. Furthermore, the Jews never called their god “Father” but “JAHVEH” and “EL SHADDAI”.

He could perfectly be

It’s like everything in this world, it’s mostly a personal voyage of discovery …