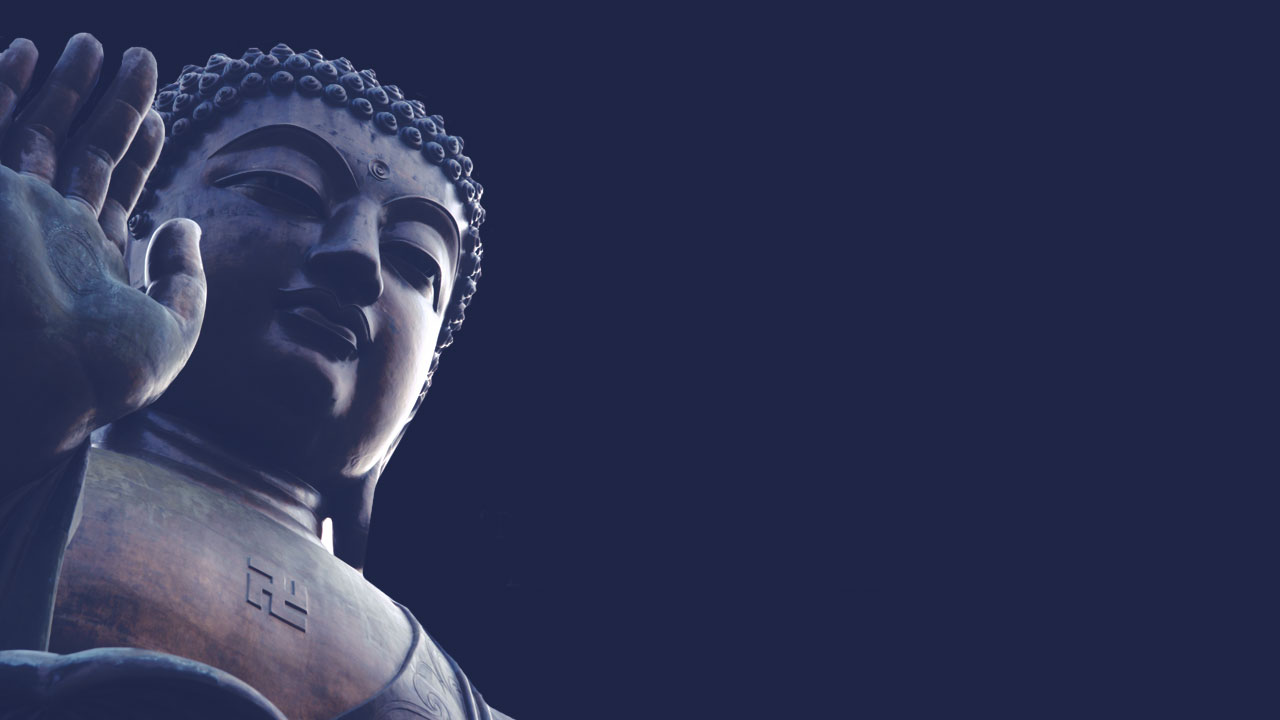 The Doctrine of Awakening: The Attainment of Self-Mastery 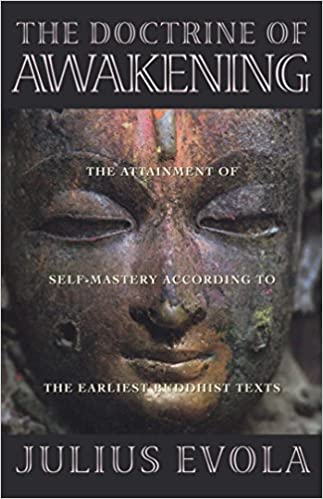 The Doctrine of Awakening: The Attainment of Self-Mastery According to the Earliest Buddhist Texts
Available at Amazon

Evola published his Doctrine of Awakening (La dottrina del risveglio) in 1943, a time when history took a tragic turn, particularly in Italy where the outbreak of a most cruel civil war occurred in the context of a world conflict that seemed to sentence European civilization to death. Entire cities, turned into ashes, had ceased to exist, and this was just the prelude to the imminent apocalypse.

In this tragic atmosphere, in which intellectuals were expected to assume a fighting attitude based on the values of action, courage, and heroism, Evola wrote a book on Buddhism for his readers! Keeping in mind the image that the West had formed of Eastern traditions, and more specifically, of the teachings of Ṡākyamuni, one can see how in Italy, among the numerous potential readers of such an unexpected work, there were some who saw in this “essay on Buddhist asceticism” a sort of provocation. This was especially so considering that Evola’s aristocratic origins did not seem particularly to predispose him to be interested in a religion in which monks, alienated from the world, played a predominant role.

This reaction to the work was obviously a misunderstanding. It ignores the fact that the future Buddha was also of noble origins, that he was the son of a king and heir to the throne and had been raised with the expectation that one day he would inherit the crown. He had been taught martial arts and the art of government, and having reached the right age, he had married and had a son. All of these things would be more typical of the physical and mental formation of a future samurai than of a seminarian ready to take holy orders. A man like Julius Evola was particularly suitable to dispel such a misconception.

He did so on two fronts in his Doctrine: on the one hand, he did not cease to recall the origins of the Buddha, Prince Siddhartha, who was destined to the throne of Kapilavastu; on the other hand, he attempted to demonstrate that Buddhist asceticism is not a cowardly resignation before life’s vicissitudes, but rather a struggle of a spiritual kind, which is not any less heroic than the struggle of a knight on the battlefield. As Buddha himself said (Mahāvagga, 2.15): “It is better to die fighting than to live as one vanquished.” This resolution is in accord with Evola’s ideal of overcoming natural resistances in order to achieve the Awakening through meditation; it should be noted, however, that the warrior terminology is contained in the oldest writings of Buddhism, which are those that best reflect the living teaching of the master. Evola works tirelessly in his book to erase the Western view of a languid and dull doctrine that in fact was originally regarded as aristocratic and reserved for real “champions.”

After Schopenhauer, the unfounded idea arose in Western culture that Buddhism involved a renunciation of the world and the adoption of a passive attitude: “Let things go their way; who cares anyway.” Since in this inferior world “everything is evil,” the wise person is the one who, like Simeon the Stylite, withdraws, if not to the top of a pillar; at least to an isolated place of meditation. Moreover, the most widespread view of Buddhists is that of monks dressed in orange robes, begging for their food; people suppose that the only

activity these monks are devoted to is reciting memorized texts, since they shun prayers; thus, their religion appears to an outsider as a form of atheism.

Evola successfully demonstrates that this view is profoundly distorted by a series of prejudices. Passivity? Inaction? On the contrary, Buddha never tired of exhorting his disciples to “work toward victory”; he himself, at the end of his life, said with pride: katam karaniyam, “done is what needed to be done!” Pessimism? It is true that Buddha, picking up a formula of Brahmanism, the religion in which he had been raised prior to his departure from Kapilavastu, affirmed that everything on earth is “suffering.”

But he also clarified for us that this is the case because we are always yearning to reap concrete benefits from our actions. For example, warriors risk their lives because they long for the pleasure of victory and for the spoils, and yet, in the end they are always disappointed: the pillaging is never enough and what has been gained is quickly squandered. Also, the taste of victory soon fades away. But if one becomes aware of this state of affairs (this is one aspect of the Awakening), the pessimism is dispelled since reality is what it is, neither good nor bad in itself; reality is inscribed in Becoming, which cannot be interrupted. Thus, one must live and act with the awareness that the only thing that matters is each and every moment. Thus, duty (dhamma) is claimed to be the only valid reference point: “Do your duty,” that is, “let your every action be totally disinterested.”

School of the Will

Evola demonstrated that this ideal was also shared by the itinerant knights of the Western Middle Ages, who put their swords at the service of every noble cause without looking for any compensation. They fought because they prepared all their lives to offer their services and not because they wanted to become rich by looting their enemies. Were they pessimists? Certainly not. At the end of their lives they too could say, like Buddha, “done is what needed to be done.” Nor were they optimists, since the principle “everything is working for the better, and in the best possible way” is not any less illusory than its opposite.

Finally, the term “asceticism” is also susceptible to being misunderstood by those who view Buddhism from the outside. Evola reminds his readers that the original meaning of the term asceticism is “practical exercise,” or “discipline”—one could even say “learning.” It certainly does not mean, as some are inclined to think, a willingness to mortify the body that derives from the idea of penance, and even leads to the practice of self-flagellation, since it is believed that one must suffer in order to expiate one’s sins.

Asceticism is rather a school of the will, a pure heroism (that is, it is disinterested) that Evola, a real expert in this subject, compares to the efforts of a mountain climber. To the layman, mountain climbing may be a pointless effort, but to the climber it is a challenge in which the test of courage, perseverance, and heroism is its only purpose. In this we recognize an attitude that Brahmanism knew under certain forms of yoga and Tantrism. A few years earlier Evola had devoted his book L’uomo come potenza ([Man As Power] 1926) to celebrating such an attitude.

In the spiritual domain, the procedure is the same. Buddha, as we know, was tempted early in his life by a form of asceticism that was similar to that of a hermit living in the desert. This approach involved prolonged fasts and techniques aimed at breaking the body’s resistance. Siddhartha, however, realized himself and achieved the Awakening only when he understood this type of asceticism to be a dead end. Turning away from the indignant protests of his early companions, he stopped mortifying his body, ate to placate his hunger, and returned to the world of human beings. But it was then that his detachment started to develop: the world no longer had a grasp on him, since he had become a “hero,” or like the ancient Greeks would have said, a “god.”

This is the profound meaning of Prince Siddhartha’s teachings, of he who became the “Enlightened One” (Buddha) or the “ascetic of the regal dynasty of the Ṡākya” (Ṡākyamuni). The value of Evola’s book lies in his clarification of this authentic Buddhism. Evola utilized a great number of original sources, especially those that were gathered in the Pāli canon (Pāli being the language employed by Buddha in his teaching career). And yet, Evola’s erudition is not running with his pen; his learning is not an end in itself, but rather fulfills its essential but subordinate role as a demonstrative means. Evola’s work, as he himself indicated in his original subtitle, is an “essay,” a summary, and not a summa. It is not a history of primitive Buddhism, but a reflection on the real nature of Buddhist asceticism and on its possible integration in the modern world.

Who knows what Evola was thinking when he wrote this book? For my part, I am inclined to believe that, having a foreboding of the imminent tragedy ahead of him, he wished to illustrate the virtue of perseverance and faithfulness, even if it meant fighting in a no-win situation.

And when in 1945 in Vienna he received the terrible wound that paralyzed him for the remaining thirty years of his life, we can believe that, overcoming his pain and the disappointment of no longer being able to climb the peaks that had always attracted him, he must have said to himself that having been born in that time and place, he had done what he needed to do, that is, give witness to Truth. And if in this dark age, in which the universe is approaching the end of one of its cycles (a necessary thing if a new world is to appear, according to the cyclical view of time), people are not able to receive such a testimony, so what? As Buddha himself said: “He who has awakened is like the lion who roars to the four directions.” Who knows where and how this roar will echo? In any event, it is the roar of a victor, and this is the only thing that matters.