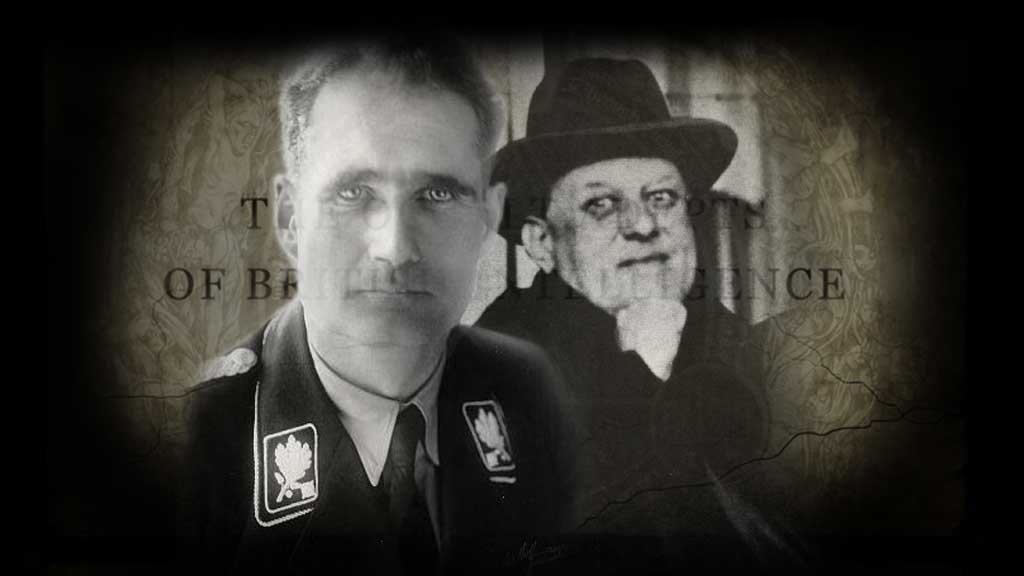 Part 3 – Was Crowley involved in the interrogation of Rudolf Hess?

Maxwell Knight from MI5, was bisexual and a friend of Lord Tregedar. Knight had a private menagerie and when Knight’s wife died in 1936, from a suspected overdose of painkillers prescribed for her bad back, bad rumors circulated … Rumors circulated that she committed suicide after participating in a magical ritual with Crowley. Some suggested that her husband murdered her for her money and Crowley had advised Knight how to do it using his knowledge of drugs.

Back to Fleming. It may have been Fleming’s interest in astrology that led to his boss Admiral John Godfrey to recruit astrologers to cast the horoscopes of Hitler to see what he might be planning. One of these astrologers was a Hungarian-Jewish novelist, journalist and film-maker, Louis de Wohl. He claimed that the SOE gave him the honorary rank of a captain in the British Army complete with an uniform. Although the Ministry of Defence denied this after the war, it was a known practice.

When Rudolf Hess carried out his disastrous ‘peace mission’ and landed in Scotland he was immediately arrested. He had chosen a Scottish landing site near the ancestral home of the Duke of Hamilton and Hess demanded to see the aristocrat.

He missed the landing spot due to sabotage of the lights at the airstrip and crashed in the country side. This is also a very remarkable odd story, on which we’ll come back later. Commander Ian Fleming was keen that Aleister Crowley should be allowed to interview Hess in captivity.

Aleister Crowley wrote Fleming four days after the imprisonement of Hess. In those letters Crowley writes: “If it is true that Herr Hess is much influenced by astrology and magick, my services might be useful to the Intelligence department.”

Although SIS asserted that Crowley never met Hess, claims exist that MI5 did arrange an interview between the two men at one of their interrogation centers.

The Nazi Party’s reaction to Hess’ ‘peace mission’ was to disown the deputy-fuehrer and his actions. Hess was simply a madman. Moreover the Party declared that astrologers and occultists disastrously influenced the mentally unstable Hess. Despite its unofficial interest, the Third Reich had always had an ambiguous official approach to occultism and secret societies. A few weeks after the failed mission an operation called ‘Aktion Hess’ was launched by the Gestapo (secret police). This included banning performances or lectures on the occult, astrology, telepathy, clairvoyance and spiritualism and many of their publicly known practitioners were arrested and ended up in concentration camps.

Cecil Williamson another MI6 Dabbler in the Black Arts