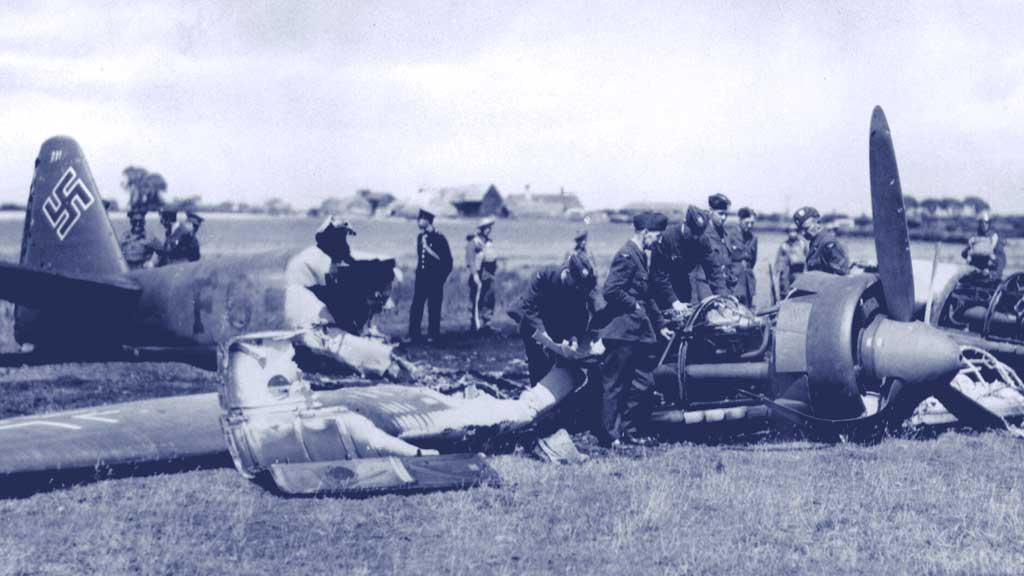 Finding the Foe – the German airmen

Finding the Foe, deals with the postwar discovery and recovery of wartime Luftwaffe aircrew who were downed and lost over the UK, most of them during 1940s.

There is a lot of detective work involved here. Sometimes airmen have been identified with the tiniest clue, although each case has a common thread; they were all concluded by the diligent research of private individuals and researchers, many involving the author.

Indeed, as a result of his work, Saunders was given a special award by the German ambassador in London.

Not all involve recovery and identification of the ‘missing’ – some are cases where buried German airmen were ‘unknown’ and are now able to be named and given formal confirmation by the German War Graves Service.

This amazing book, eloquently written, covers casualties right through 1940 to 1944 and is, as with the author’s earlier work, a real page turner!

The book’s foreword by Heinz Möllenbrok,

AS A PILOT WHO flew with the 3rd Staffel of the German bomber group Kampfgeschwader 2 during 1940, I have special cause to take particular interest in the cases of my former comrades who flew operationally over Britain during the Second World War and who failed to return.

Most particularly, I cannot help but be moved by the stories of those casualties who are still missing or who remain unidentified, some of which have touched me directly.

On 16 August 1940 I was shot down in my Dornier 17 over north Kent and taken prisoner of war, very badly wounded, near a place called Staple. Two of my crew were killed.

Not far away from my incident some other men from my same unit had also been shot down and killed that same day and are still listed as missing. Again, a few days before others from the unit were downed in the area and are still regarded as missing in action. I know that great efforts have been ongoing to try to have these men identified and this is work that has a great personal importance to me.

But for the grace of God I could easily have been one of those men and I know how important it would have been to my family to have known what happened to me under those circumstances if I had been shot down and lost over a foreign country.

As it was, I survived – but this only thanks to the great kindnesses shown to me by the British people, my enemies, during my captivity. From the very outset I was treated with humanity, dignity and compassion and I was given the very best medical treatment that saved both my life and my shattered arm. I was shown thoughtfulness and human kindness right up until he point that I was repatriated to Germany in 1943 due to my severe wounds.

I have never forgotten this treatment, and I remain ever thankful for it. I came to attack these people and yet was shown compassion by those I had been sent to kill.

Whilst I knew none of the men personally who are detailed in this book, I am ever mindful of the fact that any one of them could so easily have been me. In fact, and by coincidence, the crew of a Messerschmitt 410 shot down near Eastbourne in 1943 and the crew of a Dornier 217 downed near Middlesbrough in the same year were both serving with my old unit, KG 2, when they died in action.

Both crews are covered by my friend Andy Saunders in his fascinating book, and I was privileged to attend the burial of one of my KG 2 comrades from that Dornier 217 at a ceremony in England in 1998.

During that visit I also met up with the English nurse who had looked after me with such dedicated care in 1940, a Mrs Sheila Bambridge. Andy had found her for me after so much patient research – incredibly living just a mile or so from his home in Sussex! It was a meeting that meant so much to me and I was able to reflect on my survival and what fate had decreed otherwise for my crew members and others like those of whom Andy Saunders writes here.

It has struck me that the kindness and humanity shown to me by the British in 1940 has continued to the present day through the impartial research work done by the people mentioned in this book many decades later in finding and identifying those who were lost. It was for that reason that I wrote a full report of Andy’s good works to the German Embassy in London during 1996 and I was delighted that, as a result, Colonel Victor Zimmer was able to make a special award and commendation to the author of this book. Colonel Zimmer stated:

“Thanks to your endeavours it has been possible to establish the names and fates of German aircrews and also to identify graves here in England. Through your books with their objective accounts you have also made a valuable contribution to German history and I take this opportunity to thank you for your valuable work and your contribution to Anglo-German reconciliation and friendship.”

They are sentiments that I am delighted to echo in commending to you, the reader, this compelling and unique account that details missing German aircrews lost over Britain.