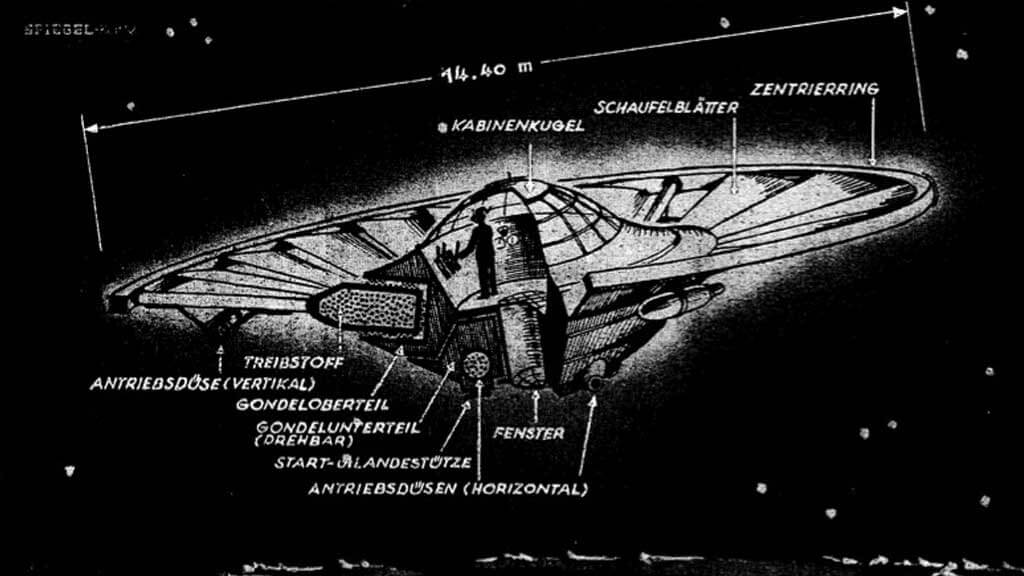 Exact 75 years ago – on 15 july 1941, Rudolf Schriever started the development of a jet driven flying saucer.

There is a man in Germany who can say much more about flying saucers than any other man on this planet.

He lives in a small house near Bremerhaven and his place buzz with activity. Emissaries from American research institutes and universities, as well as professors and engineers from western and eastern countries literally beat a path to his door. Their discretion and prudence is remarkable and true, but again their interest turns out to be only one and same topic: the flying saucer.

The resident of this house, engineer and chief pilot Rudolf Schriever, designed a flying saucer between 1941 and 1945. When the war ended, the achievements and the aeronautical arsenal of the former German Luftwaffe were scattered in the four corners of the earth.

The house at Hökerstraße 28 in Bremerhaven-Lehe became world famous among experts. Letters and parcels from all countries pile up on Schriever’s wooden table. And every day still new arrive. Flight Captain Schriever stands smiling at the window. “Why didn’t I go abroad?”

In front of the table lie plenty of contract deals, from South America, the USA, east zone … that is to say Russia. But maybe I’m not completely recovered from a bad experience in South America, said the engineer. These sightings of the Flugkreisel (Flying saucer), are of course real. Perhaps some of these sighted “flying saucers” are nothing more than the analysis of my plans, which have been stolen from me. It was May 14, 1945 and after fleeing Prague a farmer in the Prestel region took me and my family in. On that rainy day in the Bavarian forest my plans were stolen from me.

The idea itself? The basic idea is quite simple. An airplane can only take off and land at high speed. This is the main problem and the biggest danger or risk of flying an airplane. On the other hand an helicopter can take off and land vertically but in the air it’s quite slow. Hence I thought, why don’t we link the strongest features of the helicopter and those of a normal jet-aircraft design together?  That’s how Schriever came to the idea to create the fuselage as a flattened ball in the center of a rotating disc made out of blades.

I started on 15 July 1941, the development works, he said. We completed the first model of the airplane spinner on June 2, 1942. A day later it flew driven by tiny rockets, and we were all baffled by its flight performances. But the actual design and construction of the large parts I was only able to do in Prague.

The span of – if you want to call it – the first “flying saucer” was 14.40 meters and the flight performances were really striking: vertical start, vertical landing, hovering in the air and obtaining a maximum speed of  approximately 4000 kilometers per hour !

After a short break the inventor stated: “If we continued our work in 1945, flying saucers would have been as ordinary as hot buns and seen all over German skies.” 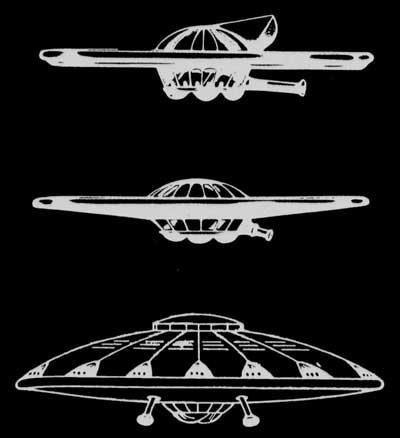 Drawings of the Project. Saucer craft designed in 1941 by Rudolf Schriever and his three colleagues, Habermohl, Miethe and Bellonzo. The first prototype flew in June 1942. The larger versions were apparently designed and manufactured at the BMW factory near Prague, Czech Republic.