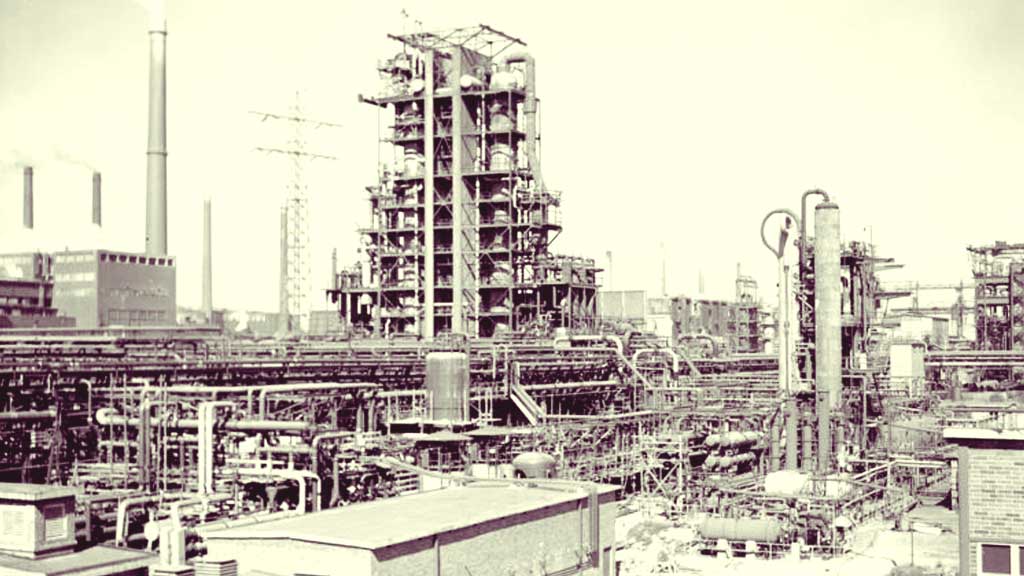 Synthetic Gasoline – Although we still do not know how nature produces oil, yet we possess already for a long time the knowledge to produce it artificially.

Friedrich Bergius a German chemist received the Nobel Prize in 1931 in recognition for inventing the process for producing synthetic gasoline in 1913.

Since 1927, I.G. Farben A.G. continued to improve this development process in their laboratories at the Leuna plant. Carl Krauch and Mathias Pier were the main chief engineers.

In 1925 Franz Fischer, the director of the Kaiser Wilhelm Institute for Coal Research in Mülheim-Ruhr, and his colleague Tropsch succeeded in the direct synthesis of hydrocarbons from coal and hydrogen.

According to Fischer and Tropsch, (working at the Kaiser-Wilhelm-Institut for Chemistry in the 1920s), three hundred thousand kilo tons of synthetic gas were produced in Germany in 1938.

How did they do it?

First the Leuna process mixes crushed coal with heavy oil into a pulp. Next some twelve-meter boilers heat this pulp under a pressure of 200 to 700 atm. This procedure is called coal hydrogenation. In the Fischer-Tropsch process, the coke or brown coal is mixed with steam and consequently this results in a mixture of carbon monoxide and hydrogen. After purification and when brought in contact with a catalyst of iron, nickel and cobalt it finally can transform itself into all possible hydrocarbons of synthetic oil. 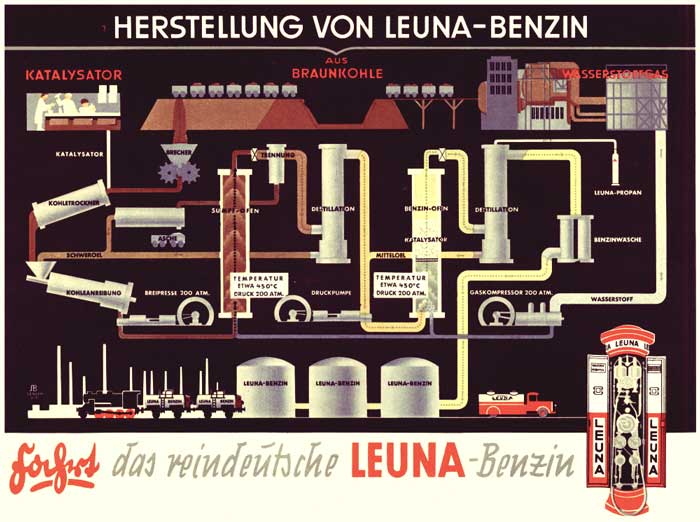 Resulting in oils with medium boiling point for instance, diesel oils, paraffin and even solid Ceresin wax. The choice of the catalyst simply determines the end product. The I.G. Farben process also depends on molybdenum–tungsten catalysts. These catalysts are still regarded as miracle substances. Something like the “philosopher’s stone“. 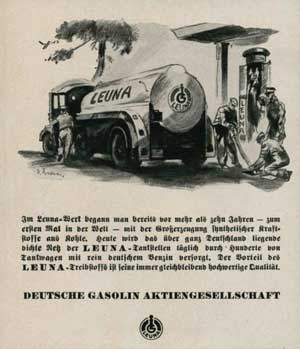 This is quite remarkable. There was no theory available nor calculations were possible to find such substances. Classical chemistry at that time couldn’t foresee such behavior. Solely our modern atomic theories provide an explanation for this.

These chemical engineers only relied on their experience and perseverance to find those mysterious ingredients that trigger those desired reactions.

And again those who perfected the process of coal liquefaction or distillation bear German names, Bergius, Krauch, Pier, Fischer and Tropsch. But a real breakthrough happened when a congress of the German chemists assembled in Cologne. At this conference Dr. Ing. Kölbel of the chemical works Homberg announced the results of his astonishing researches. 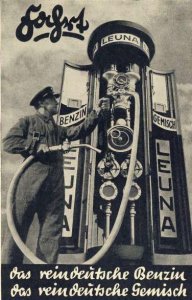 In particular “The synthesis of hydrocarbons from water and carbon monoxide”. Thus Dr. Ing. Kölbel demonstrated a revolutionary innovation in mineral oil synthesis. The starting product of Dr. Ing. Kölbel was no longer hydrogen and steam, as I.G. Fischer-Tropsch process used, but water. As hydrogen and steam alone count for 80% of the production costs of synthetic gasoline and water and carbon monoxide are the cheapest ingredients, one can easily do the maths.

Synthetic Gasoline out of Water

With the Kölbel synthesis water vapor and carbon monoxide meet at a temperature around 180 to 200° C, without the use of high pressures and in the presence of very specific mixtures of catalysts of iron, nickel and cobalt. The discovery of these catalysts was crucial.

In their presence, water vapor and carbon monoxide produce all kinds of hydrocarbons, from methane to gasoline gasoline to solid paraffin, just as in the Fischer-Tropsch process. Kölbel controlled the composition of his mixture by just choosing the catalyst. The production of one liter of gasoline requires 5 cubic meters of carbon monoxide.

Before Kölbel many thought this was impossible. Many never took such ideas serious. But now, thanks to Kölbel, it was a well-founded reality an part of serious research. From now on the technology and the economy will lead. Dr. Kölbel himself drives his car already with his mineral oil, with: gasoline from water!

Everything is economics and war is no exception. Thus synthetic gasoline production is an excellent reason for oil companies and their oil pumping countries to start a war for.