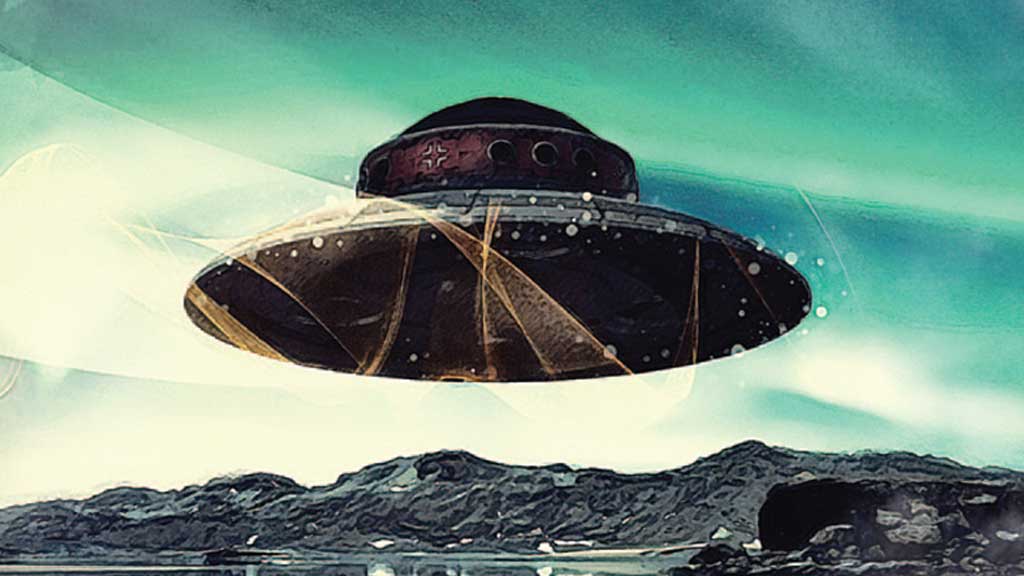 In search for the Flying Saucer behind the Otto Maier story

We already looked at the conventional disc shaped aircraft, made in Germany. But it seems when digging into Otto Maier’s story and his engine that the properties of his saucer don’t match those of the conventional saucer types. So, what about field propulsion and electromagnetic propulsion (EMP) driven technologies?  EMP is the principle of accelerating an object by the utilization of a flowing electrical current and magnetic fields. And a field propulsion system propels an object without mass expulsion. These systems sound indeed much more similar.

The existence of World War Two German field propulsion flying saucers is a topic which is denied by virtually every reputable authority in aviation history. And to be honest, it is also denied by many researchers studying German saucers. Nevertheless the dilemma is the fact that in the years immediately after the Second World War the earth’s skies all of the sudden started to be filled with flying craft which performed quite a few astonishing things.

They flew at unprecedented velocity and made strikingly sharp turns. Those crafts performed apparently non-aerodynamic turns, even at extreme speed. They lacked the tail of jets or rockets yet they glowed or gave off light at nighttime. Their edge glowed or the entire vessel spreads light. These airships were noiseless or almost silent. Occasionally they gave off a sound similar to an electric generator. Sometimes vehicles with electrically based ignition systems ceased to operate in the presence of these peculiar saucers. No government claimed these flying craft, yet they were seen allover the world.

It seems only proper to begin searching for an explanation for field propulsion saucers with the very sources which we now know built conventional flying saucers. Those German scientists of the Greater German Reich. Michael X was the first to mention a German field propulsion saucer in his 1960 book titled “We Want You Is Hitler Alive?”

We should mention the ideas of a prominent writer in this field, Mr William Lyne of Lamy, New Mexico. Mr. Lyne has written two books concerning German saucers and field propulsion, Pentagon Aliens and Occult Ether Physics. His ideas on the mechanisms of field propulsion remain the best thought out and the most detailed on the subject.

Mr. Lyne lived in close proximity to the secret weapons testing facilities of Los Alamos and White Sands, USA. The military transferred after the war German weaponry to these locations for testing. It was also the place where the United States tested out its very first atomic bomb. It is still the area of top secret military research and secret military projects. Moreover it is an area which drew a lot of flying saucer activity in the late 1940s and 1950s. Mr. Lyne was a kid in this particular time period and personally observed flying saucers just as did his friends and family. Later on, as a grownup, he went about attempting to explain technologies for the kind of aviation he had seen.

He outright rejected the alien hypothesis. He realized soon that humans must have made flying saucers. Since he observed the saucers in the 1940s and 1950s, he also knew that any explanation of their workings must be limited to the technology present in the 1940s or earlier. He connected the UFO technology to other recently imported technology from Germany while believing both had their origins with Nikola Tesla.

There are no unknown energies or mystical forces at work here. Mr. Lyne stands with both feet on the ground. Things are concrete. Machinery is charted. Matter and energy function as they always have. In reading Mr. Lyne’s work one can almost smell the machine oil and the ozone.

An Heat pump is a pretty good description of an internal combustion engine. And an Ether pump a good description for a flying saucer. Mr. Lyne explains that an electric field attracts Ether (very fine matter) to the saucer. Then the principle of magneto-hydra-dynamic pumping pushes the Ether back out. This magneto-hydra-dynamic pumping is related to the Hall Effect. The Hall effect is due to the nature of the current in a conductor. Edwin Hall discovered it in 1879. The details are explained on wikipedia here.

Some individuals see hidden, esoteric or occult knowledge as the inspiration for the breakthroughs the Germans made in field propulsion flying vehicles. Usually coupled with an exotic theory of UFO extraterrestrial origin. Indeed, some writers see an extraterrestrial origin for German UFO’s. But just stating that UFO’s are of occult or alien origin is not an explanation in itself. But their method of operation, their technology, must be explained regardless of where they came from in order for the explanation to be a satisfying one.

A connection which is more certain involves Viktor Schauberger‘s use of Pythagorean geometry. Surely, Schauberger incorporated this mathematics into his work. But it is technology. It doesn’t matter someone calls it “occult technology” or “conventional, in the end, it is just simply technology. What is called by some occult might be better called arcane.

In 1992, the Austrian authors Jürgen Ratthofer and Ralf Ettl produced the documentaries UFO – Das Dritte Reich schlägt zurück? They and allied writers offer two different systems for field propulsion. According to these writers three moving magnetic fields powered a small saucer which they labeled Vril. And a larger type existed, designated Haunebu. A series of devices powered this larger saucer.

The Haunebu pictures strongly resemble the Adamski saucer pictures of the early 1950s. Besides the Vril and Haunebu designs, Mr. Juergen Ratthofer mentions yet another type of field propulsion vehicle. This particular saucer uses a chemical engine to drive a field propulsion generator.

The type of chemical engine involved is quite similar to the famous Walter engine installed on the U-boats of type XVII. The Walter process involved a closed circuit system activated by the thermal energy produced by the decomposition of a high concentration of hydrogen peroxide.

This resulted in a 600 to 700 degree gas composed of steam and oxygen, under natural pressure sufficient to drive a turbine. After the gas had done its work if was fed into a reclamation chamber which recycled at least part of the gas back into the engine. Renato Vesco too hints at a similar engine which he even vaguely links with electromagnetic waves.

It is worth to mention that Tesla also built a power-plant of spherical construction which contained vacuum tubes. Something in line with the Austrian inventor Karl Schappeller’s device. Which we shall look at later. Dr. Hans Nieper provides some details about this Tesla free energy device.

Tesla used his engine to successfully power a Pierce Arrow automobile. This means that a spherical, working field propulsion device already existed in America powering, not a flying saucer but an automobile. All work on the same principles. So Otto Maier’s projects aren’t that far fetched.