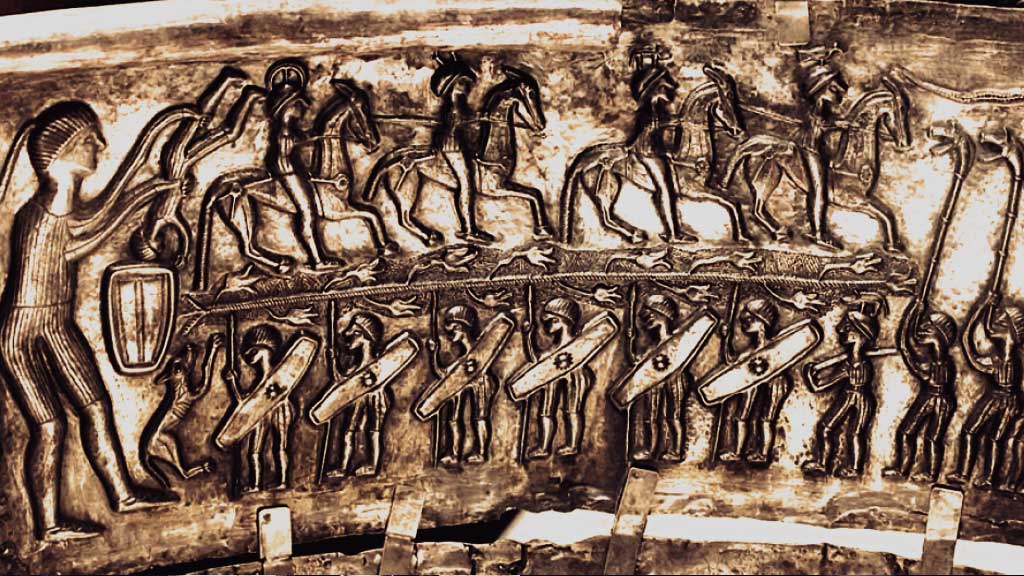 Occult knowledge and ancient wisdom. What was Parsifal seeking in Wolfram Eschenbach’s poem that was referred to as “the Grail”? A stone ? The Lapsis exillis? It is also said that a pagan astrologer read the mystery of the Grail in the stars: ” Flegetanis, the heathen saw with his own eyes in the constellations things He was shy to talk about, Hidden mysteries that trembling revealed it: He said there was a thing called the Gral. Whose name he had read clearly in the constellations.” (Wolfram von Eschenbach)

The celestial archway rotates from east to west. The moon and the stars move during the night, replacing the sun, the star of Helios: Apollo.

Apollo was the god of pure solar light who freed the Earth in the springtime from the claws of winter; for this he was also known as the soter (savior) who purified the dead sinner and led him to redemption at the entrance to the luminous land of souls. This god brought help and benediction. In a boat pulled by swans, he reached the land of the Hyperboreans. The clouds sang like the rainfall. The trickling of the water was the song of nature. For this reason, Apollo was the magister of the muses. His attributes were the lyre and the laurel, whose branches formed the crowns of poets.

Two hundred years ago close to Palestrina (Praeneste) in the mountains of Sabin, a mystical casket with objects for the cult of Apollo were discovered, an engraved scene depicts the combat of the Argonauts with Amykos, the King of the Bebrices. Once more a link between Apollo, the Argonauts, the Golden Fleece, a sacred cup.

The best known Grail – also named the Grâl, Graal, or Holy Grail – was a puzzling object for which many of the Knights of the Round Table quested in the last years of Arthur’s reign. Usually but not always described as a cup or goblet. It had the power to feed any number of people the food and drink they loved best. This cup could be found in the Castle of Carbonek. Somewhere in the enchanted Waste Land, where it played the central role in a mysterious ceremony presided over by a female Grail bearer and a wounded Fisher King.

In order to awaken the Grail’s power, heal the wounded king, and bring fertility to the Waste Land, a wandering knight had to reach Carbonek, witness the ceremony, and ask the right question; the wording of the question varied from text to text, but the most common was “Whom does the Grail serve?”

The magical motif of the cauldron

The magical motif of the cauldron is not unique to Celtic nor Germanic legends. It also appears in African, Asian and Native American folklore, where it shares a similar symbolism. However, the most famous cauldron, is that of Bran the Blessed.  Which is clearly linked with the Grail myths. The Welsh Mabinogion tells of Bran’s ‘wondrous cauldron’ which has the virtue of restoring health, even to the fatally wounded. Bran’s cauldron was said to date from ancient times and to have come originally from Ireland. Like most ancient stories it’s a bit confusing and Bran’s head is also described as his ‘cauldron’.

Can truth be a liar?

The Grail sometimes is associated with an enlightment. In terms of a related enlightenment experience, his head both represented it and contained the Grail (the divine spark of immortality) . It was cut off at his own bidding and buried beneath a tower in London, facing France to protect the people of Britain. However, King Arthur dug it up as a sign that the people no longer needed Bran’s protection now that he was king. Much like the Celts, the Norse also have a strong tradition with a cauldron. In this case the Odhrerir cauldron. This cauldron contained a potion concocted by dwarves from the blood of the wise Kvasir.

The potion imparted occult knowledge and ancient wisdom, and was deeply coveted by the god Odin himself. He managed to get hold of it by turning himself into a snake and drinking the cauldron dry. He then took it with him to Asgard. The most famous example of a cauldron within the historical and archaeological context is the Gundestrup Cauldron. The Gundestrup Cauldron was discovered in 1891 in a peat bog at Gundestrup in Jutland, Denmark. It was thought to have been deposited in the bog as a votive offering, although pollen analysis has shown that it was originally deposited on dry land and not buried.

The deity most frequently referred to by historians and archaeologists on this cauldron is Cernunnos, the ‘Horned God’, sometimes known as Herne or Orion the Hunter, Osiris or Dionysus. Others have linked Cernunnos with Lugh Lamhfhada, or ‘Lugh of the Long Arm’, the Irish version of the Indian ‘Savitar of the Wide Hand’. And as in many other tales, artifacts and songs there’s a link with the constellation Ursa Major and Minor (Arthur) and the way they form a turning spiral, a swastika.