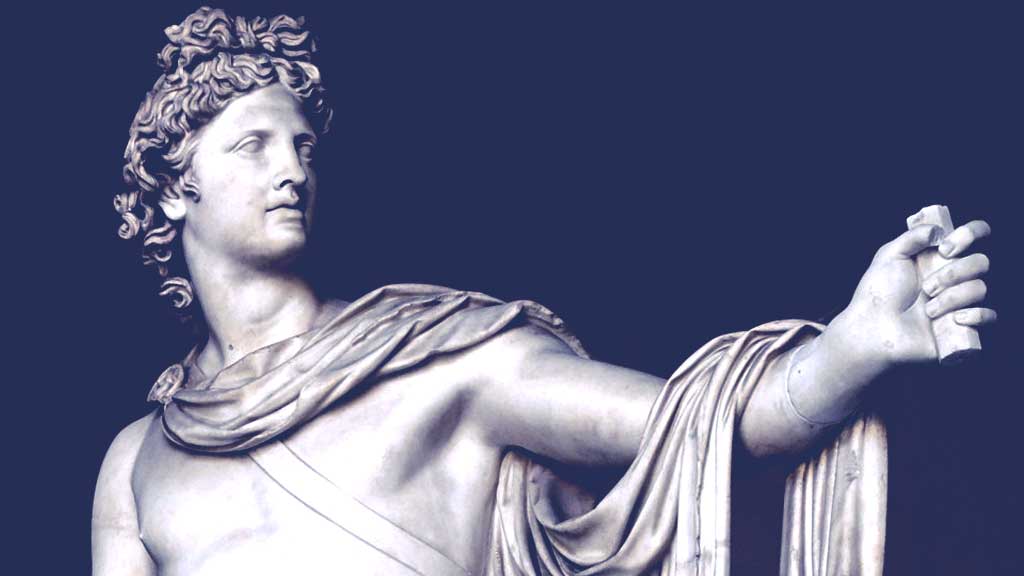 Apollo, the Bearer of Light, patron of poets and travellers, would never abandon his own in distress. He himself had become an outlaw, even seen as the Devil. But as he was not the Devil, he watched over, in accordance with the celestial laws, the forests and the routes. On the bridle of his charger, he left his carbuncle shining like the sun. When one of his minstrels died, he carried him above the clouds towards the “Mountain of Assembly in the far distant midnight”, in the extreme North.

Each time that Apollo, distanced by celestial law, was unable to make his carbuncle shine, the ‘Devil’s mother’ would arrive: the ‘Grand Mother’ who is the earth and who governs the moon. At night, she nourished the outlaws with animals, as she was their guardian, she quenched their thirst with dew, for she was its dispenser, and lit their way with silver rays…  Whilst the Devil and his grandmother were not ‘at home’ or when they could not make it on time, they would dispatch a delegate or a messenger. Lucifer sent the morning star, and the Grand Mother that of the evening: the same star, which is called Venus. It has never fallen from the sky! -O. Rahn-

In Hellenistic times, especially during the 3rd century BCE, as Apollo Helios he became identified among Greeks with Helios, Titan god of the sun, and his sister Artemis similarly equated with Selene, Titan goddess of the moon. Apollo the god of prophecy, was born in the island of Delos, and his parents were Zeus and Leto. Apollo exercised this power in his numerous oracles, and especially in that of Delphi. He had the power of communicating the gift of prophecy both to gods and men, and all the ancient Greek seers and prophets are placed in some relationship to him. The manner in which Apollo came into the possession of the oracle of Delphi (Pytho) is related differently. According to Apollodorus, the oracle had previously been in the possession of Themis, and the dragon Python guarded the mysterious rift, and Apollo, after having slain the monster, took possession of the oracle. According to Hyginus, Python himself possessed the oracle; while Pausanias states, that it belonged to Gaea and Poseidon in common.

Another set of accounts derives the worship of Apollo from the very opposite quarter of the world — from the country of the Hyperboreans, that is, a nation living beyond the point where the north wind rises, and whose country is in consequence most happy and fruitful. According to a fragment of an ancient Doric hymn in Pausanias, the oracle of Delphi was founded by Hyperboreans and Olenus ; Leto, too, is said to have come from the Hyperboreans to Delos, and Eileithyia likewise. The Hyperboreans, says Diodorus, worship Apollo more zealously than any other people; they are all priests of Apollo; one town in their country is sacred to Apollo, and its inhabitants are for the most part players on the lyre.

Apollo is also the god of song and music. We find him in the Iliad delighting the immortal gods with his play on the phorminx during their repast ; and the Homeric bards derived their art of song either from Apollo or the Muses. Later traditions ascribed to Apollo even the invention of the flute and lyre, while the more common tradition was, that he received the lyre from Hermes. Ovid Heroid. xvi. 180) makes Apollo build the walls of Troy by playing on the lyre, as Amphion did the walls of Thebes.

Some feats of Apollo

and probably we missed some other …