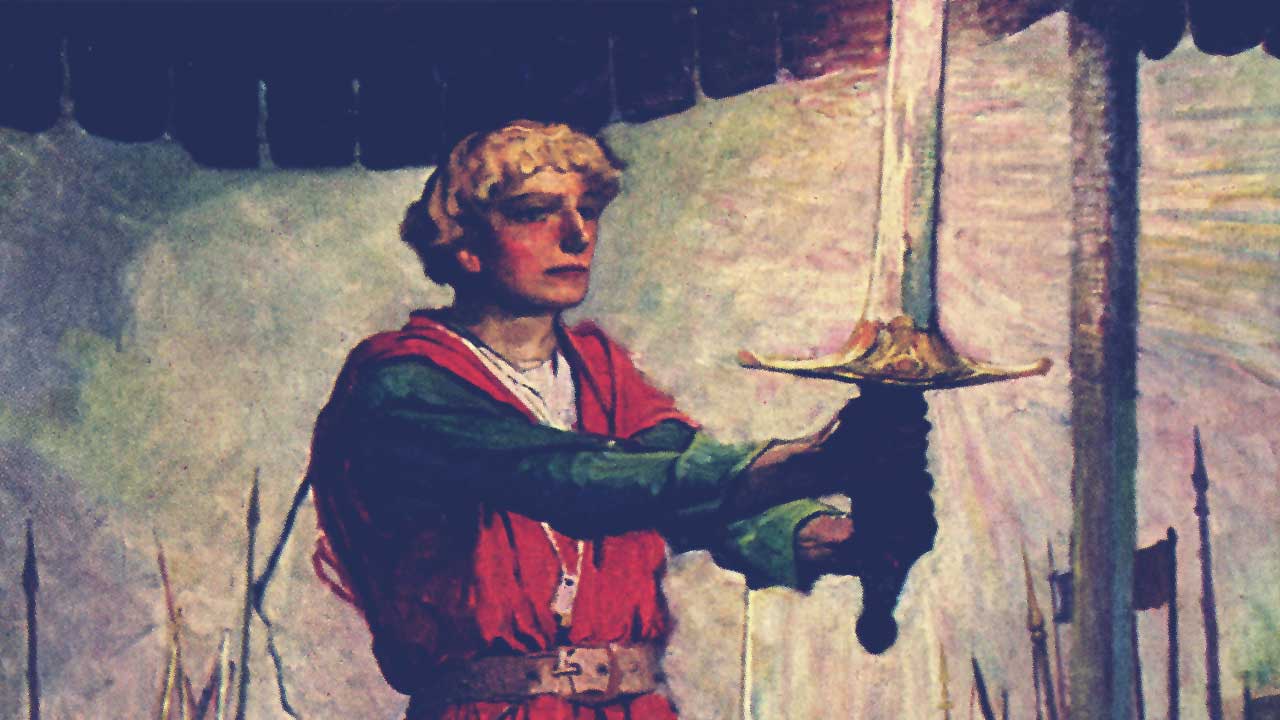 A book written by an intriguing Sir Thomas Malory

Sir Thomas Malory came from a family steeped in the values and traditions of the chivalric code. His ancestors were ‘gentlemen that bear old arms’, and their blood relationship with both the Normans and the Vikings suggests that they were sufficiently robust to do so. They had settled at Newbold Revell, in Warwickshire, and had managed to acquire vast estates throughout that county. As the inheritor of a name and domain, Malory himself was ineluctably drawn into the contests of the wider world.

He was born, in the first decade of the fifteenth century, at a time of great violence and uncertainty. Richard II had been deposed and murdered in 1400; his successor, Henry IV, was continually beset by all the confusion that surrounds any successful rebel. So the realm was disordered. This context of suspicion and almost continual violence can be glimpsed in the pages of Le Morte d’Arthur, most particularly in the conflict between Arthur and Mordred.

In this period of battles, and rumours of battles, there can be little doubt that Malory would have been acquainted with the great chivalric tales of the age. They were part of any gentleman’s education. He would have heard readings of Brut and the alliterative Morte Arthur , those great clarion calls to the knightly spirit. He would also have attended jousts and tournaments, where the words of the ballads and epics took on a formidable and glamorous life. We may apply to the young Malory his own words, ‘This child will always be shooting or casting darts, and is glad to see battles and prancing knights.’

He was also trained in all the feudal arts of chivalry – arts that included hunting, riding, hawking and archery. His earliest biographer, writing in the sixteenth century, described him as ‘outstanding from youth for his heroic spirit and for many remarkable gifts’. At the age of fourteen, in fact, he went to war against France in the retinue of the Earl of Warwick. He served as a ‘lance’ at Calais and four years later he was mentioned at a muster roll in Normandy. In that capacity he may have participated in the siege of Rouen, and was part of the army under the command of Henry V. It is perhaps not coincidental that Henry V was often compared to the legendary Arthur.

In 1433 or 1434, while he was in his early twenties, Malory inherited the familial estate; eight years later he became a knight, the goal of all chivalric ambition. He also became Justice of the Peace, Member of Parliament, and Sheriff of Warwickshire. These were all highly significant positions, emphasizing Malory’s status at the very summit of the county hierarchy. To be sheriff was, indeed, to be the most important person of the shire. He was directly responsible to the king.

The house at Newbold Revell was enlarged, no doubt because he was in the process of acquiring a wife and family. He had in any case a large household of servants, one of whom was a harpist whose task was to sing of love and chivalry as the wine was being passed around. He must also have owned a large collection of books, which in those days were locked and guarded as precious objects.

Yet he was in no sense the embodiment of literary or courtly virtue. At the beginning of the twentieth century an American scholar discovered a court record, partially burned, that accused Malory of rape, ambush, intent to kill, theft, extortion and gang violence. That is probably a good summary of the career of a fifteenth-century knight, even though it is not a model example of the ideal of medieval chivalry.

In 1451 he was briefly imprisoned at Coleshill Manor, but escaped by swimming across the moat. It sounds a romantic feat, but at the time the moat was filled with sewage. Then he gathered up a motley army and attacked Coombe Abbey in his own county, from which place he stole money and valuables. 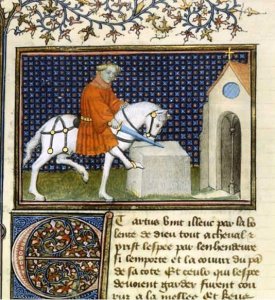 He was taken into custody, and for the next eight years he was in and out of prison. He broke out of jail in Colchester in 1454, while threatening his gaolers with an assortment of weapons. Sir Malory was never formally put on trial, owing to the annoying inability of jurors to turn up on the appropriate occasions, and as a result he was often freed on bail. He spent a further period in Newgate, but the cause of his imprisonment is not known.

Life in prison was not necessarily as hard as it is in the twenty-first century. He had his own set of chambers, and was granted access to his family.

He had enough money, too, to purchase the comforts of home. At the end of one of the Arthurian stories he refers to himself as ‘a knight prisoner’, so we know that he wrote at least part of Le Morte d’Arthur while incarcerated; this great epic may therefore be seen as a towering example of prison literature, to be compared to Bunyan’s The Pilgrim’s Progress and The Consolations of Philosophy by Boethius.

The setting may also help to explain the tone of melancholy that seems to invade the narrative, a wistfulness combined with a dour sense of fate. The story of Arthur is accompanied by sensations of loss, fleetingness and transiency, as well as a note of stoic resignation. Which may reflect the author’s own experience.

The judicial pardon of Sir Thomas Malory was inscribed on an official roll in the autumn of 1462. He is mentioned in a list of knights about to march into Northumberland. He was by now an old, as well as an experienced, warrior. Then once more he disappears from the record until his death in the spring of 1471. It is not known how or where he died.

He was buried in the Greyfriars Church by Newgate. However, and the proximity to that famous jail suggests that he was once more a prisoner. The church and graveyard are now no more than ruins. But of course he left behind a greater monument. Le Morte d’Arthur was published by Caxton’s press in the summer of 1485. The story has been continually in print since that time.

Theme of the Holy Grail

As the quest for the Holy Grail demonstrates, chivalry was closely bound with the ideals and aspirations of Christianity. It might be said to spring from the first crusades, in fact, when knights fought under the banner of the Cross against the heathen.

The crusading knight would be expected to prepare himself with vigils, fasts and prayers. The forces of Christ were meant to be pilgrims as much as soldiers.

There grew up cults of military saints, such as Saint George and Saint Victor. Moreover the roles of knight and monk were combined in the religious orders of Templars and Hospitallers. A knight was meant to be chaste and pious; the model of knighthood was of course Sir Galahad, whose apotheosis is admirably described in Malory’s account.

But chivalry was also associated with the code of courtly love that celebrated the female as the source of all virtue and honour.

A knight fought for his lady; his love for her rendered him stronger and more courageous. Lancelot and Guinevere, Tristram and Isolde, are among the most famous lovers in literature; much of Malory’s narrative is therefore devoted to them. Like the Platonic love of an earlier civilization (then generally between male and male), courtly love was a shadow or echo of heavenly harmony.