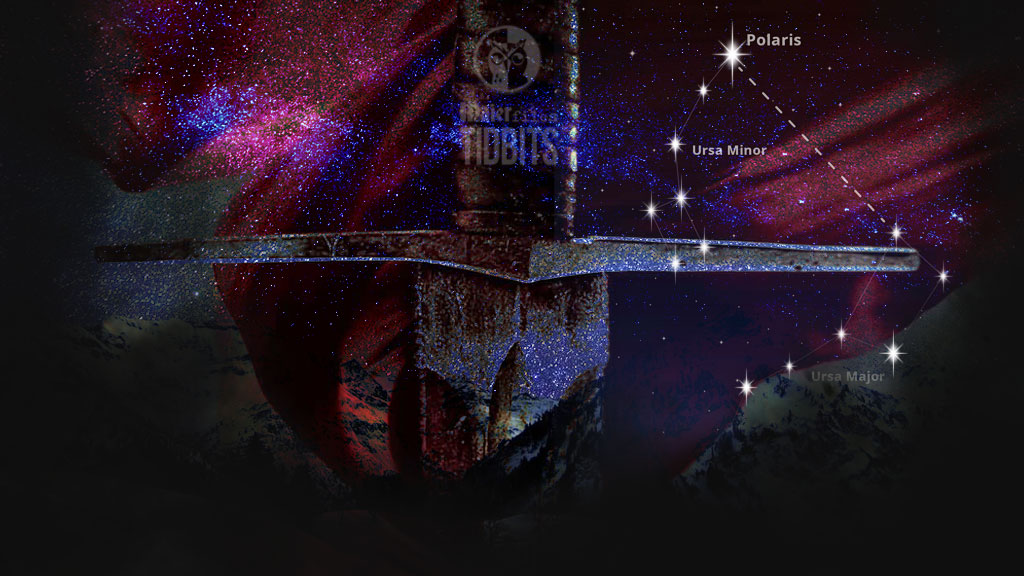 And the link to the Hyperborean tradition

In every varieties of the Arthurian legend, the traditional reality of Arthur (who supposedly was the Warrior King of the Nordic Cimres as they definitely battled against the Anglo-Saxons between the 5th and sixth century C.E.), is less important in comparison to the aspect according to which we are led to see in his kingdom a sense of the fundamental regal function purely linked to the Hyperborean tradition, to the point that it obtained a value with symbolic together with supra-historical figures.

Therefore the connection between Arthur’s kingdom and Britain becomes casual; in medieval literary works this kingdom possessed rather a supranational significance, as it cherished the ideal chivalry. The suggestiveness that it stretched on the heroic medieval Christianity was so tremendous that:

The name Arthur is subject to numerous interpretations, the most reliable of these attributes to the Celtic words arthos (bear) and viros (man). Nennius (a Welsh monk of the 9th century) had already explained: Arthur latine sonat ursum horribilem. (Arthur means terrible bear) This meaning of a terrible virile power is associated with a symbolism of Hyperborean source and simultaneously points to the concept of a central or “polar” function.

The fact is, the bear is just one of the divine symbols of the ancient Nordic cult and at the same time, in astronomic symbolism, represent the “polar” constellation Ursa Major.

Additionally, in the corpus of traditional scripts, symbols and names little by little build up a connection between this constellation (with the symbolism of the pole or of the center referred to it) and Thule, a term designating the Hyperborean “White Island;” the original core. (As explained in “The King of the World” by René Guénon, chapter 10)  Consequently the polar, the Hyperborean, steady center along with the regal, warrior attributes unify in the character of Arthur. 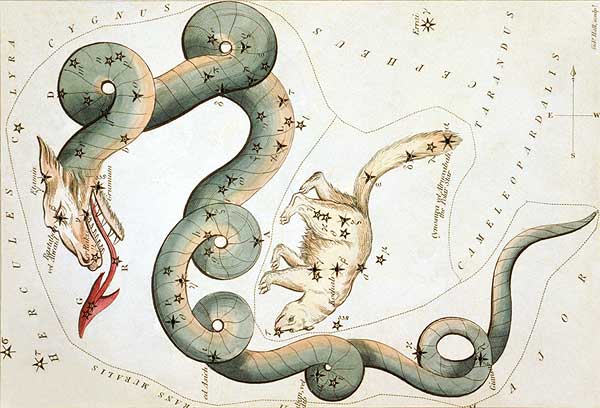 The involving virile and warrior aspect that could be expected in Arthur as a horrible bear, an ursus horribilis is furthermore tailored in the legend by Arthur’s being always escorted, as some type of complement or counterpart, by Myrddhin or Merlin, who carries a spiritual knowledge and power. It appears in some of the tales that this Merlin is less an individual person and more the embodiment of the transcendent and spiritual side of Arthur himself. After all, the name Bear (Bjorn) was applied in Nordic traditions to Thor, who is one of the Aesir heroes, struggling against elemental beings. Furthermore in the Ynglingasaga, the bear and the wolf are forms taken by Odin, the supreme chief of Valhalla and of Midgard, or the “Central Seat.”

The tight interconnection between the warrior and the spiritual ideals became a distinctive characteristic and something of utmost significance of the chivalry of King Arthur’s court. It includes the meaning of the most typical adventures related and attributed to its members. The Knights of the Round Table, more precisely, of King Arthur, are not just warriors. Le Morte D’Arthur (1485), Sir Thomas Malory’s unique and splendid version of the Arthurian legend, one can read:

And when they are chosen to be of the fellowship of the Round Table, they think themselves more blessed and more in worship than if they got half the world; and ye have seen that they have lost their fathers and mothers, and all their kin, and their wives and their children, for to be of the Fellowship.

The Grail on its own could symbolize the transcendent aspect through which this knighthood sought ambitiously to make it perfect: this can be undeniably observed in the variations of the myth wherein Arthur’s kingdom is confused with the Grail’s. Let’s take the episode concerning the stones of Stonehenge. Here Merlin, orders his warriors to go and retrieve the massive rocks from faraway peaks and says: “Go to work, brave warriors, and learn, by rolling forward these stones, whether physical strength surpasses the spirit or whether the spirit surpasses physical strength.‘

It turns out that the warriors are not able to accomplish this, however Merlin is capable of accomplishing this task laughingly and effortlessly. That the warrior virtue included, in the Arthurian cycle, had a spiritual reference point can be seen from this small dissertation in the Historia regum britanniae (the pseudohistorical account of British history, written around 1136): “Fight on for your own land, and even welcome death, if necessary; for death is a victory and the liberation of the soul.”

This is exactly the ancient perspective of the mors triumphalis, which is a principal element of the ethics of heroic traditions. In accordance with the lore, Arthur proved his natural right to be the authentic king of all of Britain by passing the so-called challenge of the sword, that is to say, by successfully getting a sword out of a great quadrangular rock on the altar of the temple, clearly an adaptation of the “stone of kings” that belonged to the ancient tradition of the Tuatha de Danaan.

Sword out of the rock

And not only the Irish legend refers to an identical deed, also Siegfried, in the German saga and Sigurd in Norse saga, successfully completes a similar test. They take out of a tree a sword stuck in it, which is something no one else had been able to do.  At this point one can uncover a dual, convergent symbolism. On the one hand, we have the common symbolism of the “foundation stone;’ which hints at the polar concept; as a consequence the allegory as well as myth allegedly refer to a virile power (i.e., the sword) that must be pulled from that principle. On the other hand, to take the sword out of the rock could also suggest the freeing of a particular power from matter, because the stone usually represents this meaning.

It as well affirms a different episode in the lore, that wherein Arthur, led by Merlin, seizes the sword Excalibur, which is held by a mysterious arm floating over the waters. (Told in “Le Morte D’Arthur”) But this weapon, forged in Avalon, is related to the Supreme Center; its being held above the water symbolizes a force detached from the conditions of the material, passional, and contingent life, to which a fundamental aspect of the symbolism of water always referred.

Such a life must be overcome, not only by those who yearn to receive a regal mandate from the “center” and become leaders of men in a higher sense, but also by every knight who wants to be worthy of belonging to the followers of Arthur and ultimately to find the Grail again.

The seat of King Arthur

Concerning the seat of King Arthur, one usually find the recurrence of the legendary symbols of the unreachable land: according to Andreas Capellanus, Arthur’s is a kingdom separated from the human world by a large river, and it can be accessed only by crossing a dangerous bridge. Giants defend this kingdom and in it there is a castle that is constantly revolving. King Arthur took a supernatural vessel from a king of the ‘other world’ and kept it in that castle.

This vessel-which, like the Grail in the castle of the “rich” king, is very similar to the vessel Dagde, one of the symbols proper to the Hyperborean tradition of the Tuatha de Danaan-“satiates” everybody, heals all injuries, and guards from the erosion of time, at the same time denying its gifts to cowards and oath breakers. Such a seat, as a revolving castle (Caer Sidi), is one and the same with the “rotating island” that in the ancient Celtic saga is often the equivalent of the Glass Island and, in general, of Avalon; here we certainly find an allusion to the polar land that revolves around its axis and carries along the world in its rotating motion. 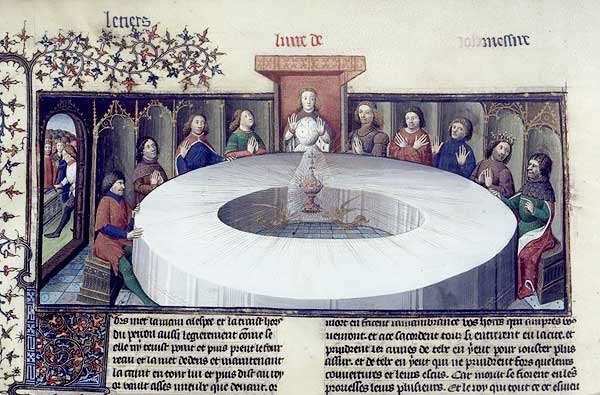 The spinner of the wheel

This is a visible reminder of the image of the Universal Ruler (cakravartin), an expression that literally means “the spinner of the wheel;” in  regard to him who, as an immobile center, moves the wheel of the regnum and of the ordered universe. These ideas can also be found in the symbolism of the Round Table, which was instituted by Arthur, under Merlin’s advice, to characterize the knightly order of which he was the supreme leader.