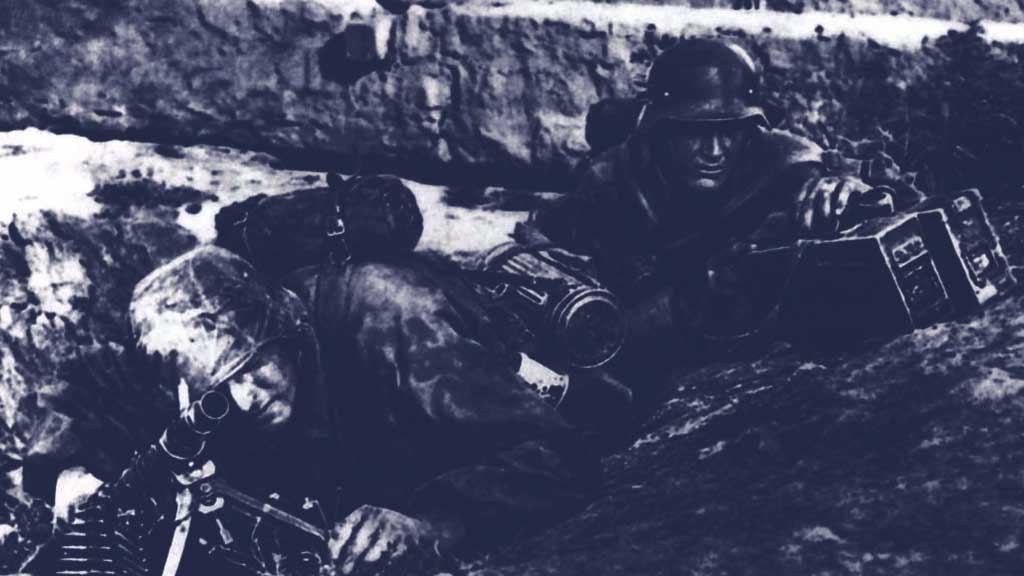 SS-Panzerkorps and the Battles on the eastern front

Douglas Nash's detailed book on the tactical and operational levels 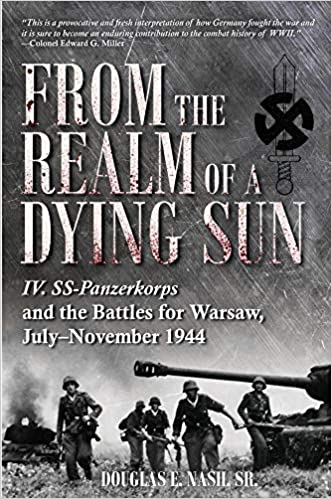 FROM THE REALM OF A DYING SUN
Available at Amazon

The SS-Panzerkorps battles … amazing detailed page turner books by Douglas E. Nash!
While the activities of American and British staffs of World War II are well documented and preserved, at least in their own formal command histories or chronologies, the staff histories of the German Army of that period—the Wehrmacht—have a checkered past. Not only did Germany lose the war, but unlike previous wars that Germany had won or lost, the institutions of the Wehrmacht did not survive the war—its Generalstab (General Staff), as well as the Luftwaffe, Heer, and Kriegsmarine, were disbanded, the Waffen-SS labeled a criminal organization, Germany split between the two Cold War-era factions, and a 10-year hiatus ensued that would last until 1955.

During World War II, the armed or Waffen-SS  branch of the Third Reich’s dreaded security service expanded from four regiments and 20,000 men in 1939 to 38 divisions by the end of the war, eventually growing to a force of over 900,000 men until Germany’s defeat in May 1945. Not satisfied with allowing his nascent force to be commanded in combat by traditional corps or army headquarters of the Wehrmacht, Heinrich Himmler, chief of the SS, began to create his own SS corps and army headquarters, starting with the SS-Panzerkorps (soon renumbered as II. SS-Panzerkorps) in July 1942. As the number of Waffen-SS divisions increased, so did the number of corps headquarters, with 18 corps and two armies being planned or activated by the war’s end.

SS-Panzerkorps and their subordinate divisions

The histories of the first three SS corps are well known—the actions of I., II., and III. (Germanic) SS-Panzerkorps and their subordinate divisions, including the Leibstandarte SS Adolf Hitler, Das Reich, Hitlerjugend, Hohenstaufen, Frundsberg, and Nordland divisions, have been thoroughly documented and publicized. In addition, their leadership rosters include some of the best-known (and most notorious) commanders and leaders of the Waffen-SS—Paul Hausser, Sepp Dietrich, Felix Steiner, Hermann Priess, Wilhelm Bittrich, “Panzer” Meyer, Jochen Peiper, Fritz Witt, et al. Their key roles in some of the war’s greatest battles, including Kharkov, Kursk, Caen, Falaise, Arnhem, the Ardennes and Berlin, have been acknowledged and widely studied by students of the art of war and figure prominently in wargaming and battle simulations as well.

Overlooked in this pantheon is another SS corps that never fought in the west or in Berlin, but one that participated in many of the key battles fought on the Eastern Front during the last year of the war—the IV. SS-Panzerkorps. Committed to battle for the first time during the initial stages of the defense of Warsaw in late July 1944, the corps, consisting of both the 3. and 5. SS-Panzer Divisions (Totenkopf and Wiking, respectively) was born in battle and spent the last 10 months of the war in combat, figuring prominently in the battles of Warsaw, the attempted relief of Budapest, Operation Spring Awakening, the defense of Vienna, and the withdrawal into Austria, where it finally surrendered to U.S. forces in May 1945.

Though perhaps not as glamorous as the other three aforementioned corps, Herbert Otto Gille’s IV SS-Panzerkorps was renowned for its tenacity, high morale, and, above all, its lethality, whether conducting a hard-hitting counterattack or a stubborn defense in situations where its divisions were hopelessly outnumbered. Often embroiled in heated disputes with its immediate Wehrmacht higher headquarters over his seemingly cavalier conduct of operations, Gille’s corps remained to the bitter end one of the Third Reich’s most reliable and formidable field formations.

Volume I covers the formation of the corps, its leaders, staff organization, and brief histories of its two key units—the Totenkopf and Wiking panzer divisions—from the corps’ inception in August 1943 until the end of the battles for Warsaw in November 1944. Volume II will focus on the period December 1944 to May 1945, during which Operation Konrad I, II, and III (the relief attempts of Budapest), the corps’ defence of Stühlweissenburg, its role in Unternehmen Frühlingserwachen (Operation Spring Awakening), Germany’s last large-scale offensive of the war, the retreat to Vienna, and the final events of the war took place.

Work on this manuscript took four years and could not have been completed without the advice and assistance of numerous individuals, military historians, and authors in their own right, living in the United States, Europe, and Australia. Another primary source has been a number of Waffen-SS veterans of the Wiking Division, who lived through many of the battles described in this book.

This second volume picks up at the end of November 1944, where the first left off, with the corps still engaged in defending the so-called “Wet Triangle,” that tactically significant chunk of terrain situated between the Narew and Vistula Rivers. Seemingly relegated to a secondary front, the corps was jolted out of its holiday preparations when the Oberkommando der Wehrmacht (OKW) ordered it to begin moving by rail to another theater of operations on Christmas Eve. Thus would begin the final phase of the war in the East, with the corps once again called upon to carry out one of the most audacious attacks of World War II—the relief of an encircled city.

During the see-saw fighting that ensued, the IV.SS-Pz. Korps, along with a large number of other German Army divisions, sought in vain to relieve the embattled garrison of Budapest and to re-establish the old front line along the lower Danube. The final volume in this trilogy will focus on the last three months of the war, which witnessed not only the Third Reich’s last large-scale offensive of the war, Operation Frühlingserwachen (Spring Awakening), but the Red Army’s Vienna Operation, which drove German and Hungarian forces out of Hungary and deep into southeastern Austria, as well as the fall of Vienna.

On Christmas Eve 1944, the men of the IV SS-Panzerkorps were preparing to celebrate the occasion as best they could. Taking advantage of the pause in the fighting around Warsaw, they looked forward to partaking in that most German of holidays, including the finest Christmas dinner their field kitchens could still prepare in this fifth year of the war. They had earned it too; after five months of unrelenting combat and the loss of many of their friends, troops from the corps headquarters, headquarters troops, and its two divisions—the 3rd SS Panzer Division “Totenkopf” and the 5th SS Panzer Division “Wiking”—were eagerly anticipating what the holiday would bring, including presents from home and perhaps sharing a bottle of schnapps or wine with their comrades.

This was not to be, for that very evening, the corps commander, SS-Obergruppenführer Herbert Otto Gille, received a telephone call notifying him that the 35,000 men of his corps would begin boarding express trains the following day that would take them from the relative quiet of the Vistula Front to the front lines in Hungary, hundreds of kilometers away. Their mission: Relieve Budapest! Thus would begin the final round in the saga of the IV SS-Panzerkorps. In Hungary, it would play a key role in the three attempts to raise the siege of that fateful city.

Threatened as much by their high command as by the forces of the Soviet Union, Gille and his troops overcame seemingly insurmountable obstacles in their attempts to rescue the city’s garrison, only to have their final attack called off at the last minute. At that moment, they were only a few kilometers away from the objective towards which they had striven for nearly a month. After the relief attempt’s failure sealed the fate of hundreds of thousands of Hungarians and Germans, the only course of action remaining was to dig in and protect the Hungarian oilfields as long as possible …