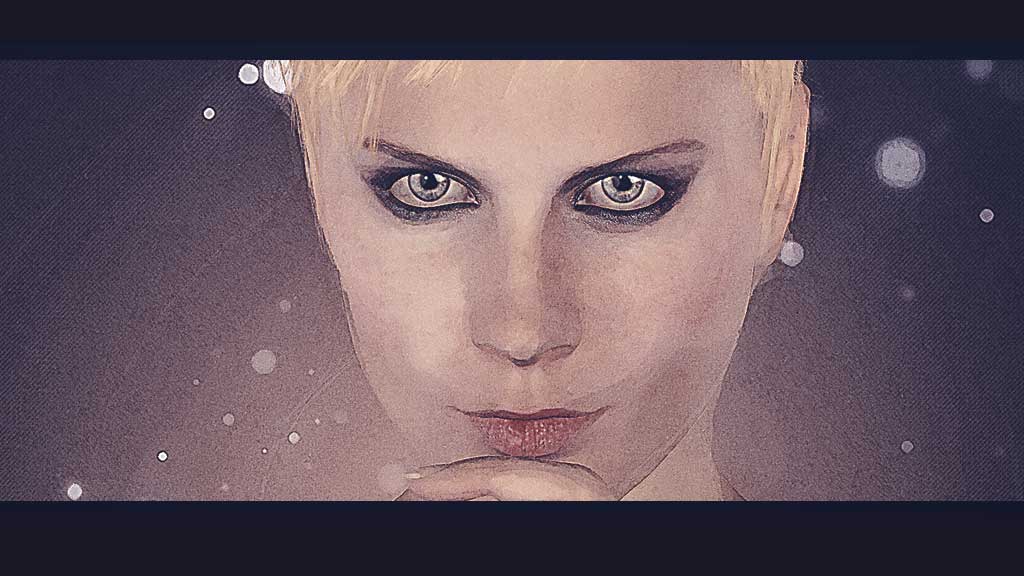 The story behind the Goose Girl

The Power to Accept

The story of the Goose Girl starkly shows the process that sets out when any one chooses to neglect or simply reject reality. And as a result chooses not to move into action. The Goose Girl, once an exquisite little princess who held tremendous promise, slowly but surely lost her dignity, her horse, her clothing, and last but certainly not least her personal identity. Your identity is not only who you were, nor is it who you may be. It is who you are right now.

Without accepting this moment in time,you may change into the Goose Girl and thus lose your instant sense of identity. Moreover, in the story, the impudent waiting maid threatened to murder the princess should she ever take action or speak out against her. For all of us, the current or present moment can feel menacing, and similar to the waiting maid, it may well paralyze us with fear. When you fail to recognize what is happening in the moment you lose power while you can not act effectively. The story does not burden you with the negative message.

It continues to demonstrate what will happen once you claim the power to accept. At that moment your life is infused with power it becomes well balanced and transformed. The power behind acceptance is its potential to prod you into the actions that must be taken in the moment. In that ultimate crucial moment of the tale, when the Goose Girl takes action and tells the king of her plight, the tale tells that she was transformed. She was so radiant “that she was beyond recognition.”

Acknowledgement of the situation empowered the Goose Girl to act, and so transformed her present condition.

Once there was a princess who was betrothed to a prince that lived in a far away kingdom. The princess’ good mother pre​ pared the girl for her journey. She gave her plenty of gold and silver, as well as many other jewels and treasures befitting a young woman who was about to be a royal bride. And she also gave the princess a waiting maid to ride with her and give her into the bridegroom’s hands. Both the waiting maid and the princess were given horses, but the princess’ was a gift from a kindly fairy who had loved and guided the princess since birth.

The fairy’s horse was an enchanted beast named Falada, who had the power of speech. When the time came for them to set out, the fairy said to the princess, “Take care of Falada, dear little princess, for she may be of use to you along your journey.” The princess took in the kindly fairy’s words. Then she got upon the horse and set off on her journey to meet her bridegroom.

As they were riding along, a good distance from the princess’ home, the young girl asked the waiting maid to use the golden cup and fetch her some water from a nearby stream. The impu​dent maid refused her, saying, “If you are thirsty, go get the water yourself! I shall not be your waiting maid anymore!” The princess got down off the horse and knelt over the little brook and drank.

She was frightened and dared not bring out her golden cup. She cried and said, “What shall become of me?” The enchanted horse called to the princess in hushed tones, saying, “Princess, if your mother only knew, this day she would rue!”

The princess was very gentle and meek, so she said nothing about her maid’s ill behavior, but got back up on the horse and continued the journey.

As they rode on, the day became so hot that the princess asked once more for the maid to fetch her some water from a nearby stream. The maid replied more rudely than before, “Fetch the water yourself, wench, I’m no longer your maid!”

The princess got down off the horse, and leaned down to drink at the little brook. As she drank, she cried, saying, “What will become of me?” The horse once again replied, “Princess, if your mother only knew, this day she would rue!” When the princess was done drinking, she stood up and found the maid now astride Falada.

The maid said, “I shall ride Falada, you may have my horse in exchange” Not only this, but soon the princess was forced to take off her royal clothes and put on her maid’s ragged ones.

The unfaithful servant threatened to kill the mistress should she ever tell anyone what had happened. But Falada saw all that had happened and remembered it.

Once they came upon the royal court, they were met by great revelry and joy. The prince met the two women, lifted the false bride into his arms, thinking this was his bride to be, and took her upstairs to the royal chamber.

The true princess was instructed to stay in the courtyard below. Now, the old king spied the lovely princess in the courtyard and inquired about her. But the treacherous false bride told him, “That is a servant I brought to wait on me.

Please give her something to do so that she will not be idle.” So the old king had the princess sent to help a lad who took care of the geese.

Then the false bride said to the prince, “Do me this one favor: have the horse I rode in upon slaughtered, for it was unruly and troubled me along my way.”

But the truth was that she was very much afraid that Falada would one day tell the truth of what she had done to the princess. The prince fulfilled her wish and had the beast killed. 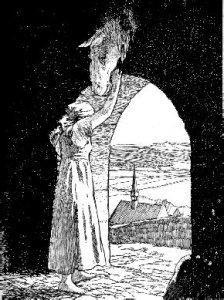 When the princess heard of it, she cried and begged the slaughterer to nail up Falada’s head against the large dark gate of the city, so that she might see her sometimes. The slaughterer took pity on the poor girl and did as the princess asked. The next morning, the princess, now known as the goose girl, went to work with the goose herder. The geese made their nests just outside the walls of the city, so they had to pass through the dark gate. At the gate she mournfully sighed, “Falada, my poor horse! What shall become of me?”

To which the head answered, “Poor little princess, you should be the bride. If your mother only knew, this day she would rue!” This happened the very next day as well. As the princess and the goose herder went through the dark gate on their way to work, she mournfully sighed, “Falada, my poor horse! What shall become of me?”

The horse’s head would always reply, “Poor little princess, you should be the bride. If your mother only knew, this day she would rue!” This so disturbed the goose herder that he went to the old king and said, “I cannot have that strange girl helping me with the geese any longer. She talks to a dead horse’s head at the dark gate and is sullen all day.” 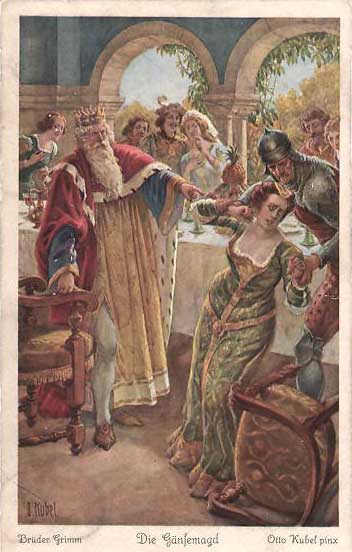 “Tell me more,” replied the king. The goose herder told the whole story of what happened every day at the gate. The old king told the boy to go out with the goose girl one more time, and when morning came, the king placed himself behind the dark gate. He heard for himself how she called to Falada and how she answered her. The old king went home without being seen and when the goose girl came back in the evening, he asked her why she spoke so to the horse’s head.

The princess burst out into tears and said that she must not tell anyone or she would surely lose her life. But the old king begged her so hard that she would have no peace until she told him the story word for word. It was very lucky for her that she did so, because the king ordered royal clothes to be put upon her at once.

So transformed was she that she was quite dazzling to the eyes. And so radiant was she that she was beyond recognition. The king told his son that his was a false bride, a waiting maid, while the real bride, the princess, stood by. The prince was overjoyed at her radiance and impressed by her courage to come forward. Without saying anything to the false bride, the king ordered a great feast.

The prince sat in the middle and the princess sat on one side, while the false bride sat on the other. So radiant was the princess that the waiting maid did not recognize her. After they had their fill, the king said he would tell them a tale. So he began, and he told everything the princess had told him as though it were a story he had once heard. At the end, he asked the false bride what should be done with one who would behave thus.

The false bride replied, “She deserves to be put stark naked into a barrel lined with sharp nails, which should be dragged by two white horses up and down the street till she is dead.” “Thou art she!” exclaimed the old king, “and thou hast judged thyself! So shall it be done to thee!” So away went the false bride at the order of the king. The prince then married the true princess, and at the wedding the good fairy came and restored Falada to life. From then on, they reigned over the kingdom in peace and happiness all their lives.

Another tidbit about the story: The name of the horse Falada suggests an ancient origin of the tale. It is similar to the name of Roland’s horse, which in the Chanson de Roland is called Valantin, Valantis, Valatin, etc. Even more ancient is the motif of the talking horse. Tacitus reported that among the Germans horses were presumed to be able to predict the future and were used as oracles. Among the Scandinavian nations, the horse is viewed in similar ways.

One can ask why the old Mueller told Lena in her childhood the story of the Goose Girl over an over again. Could it be that he already warned Lena for what’s to come? The Goose Girl learned that it is much harder to be truly oneself, but that this alone will gain her true autonomy and change her fate while the evildoer could think only of trying to be—or appear to be—somebody she was not.