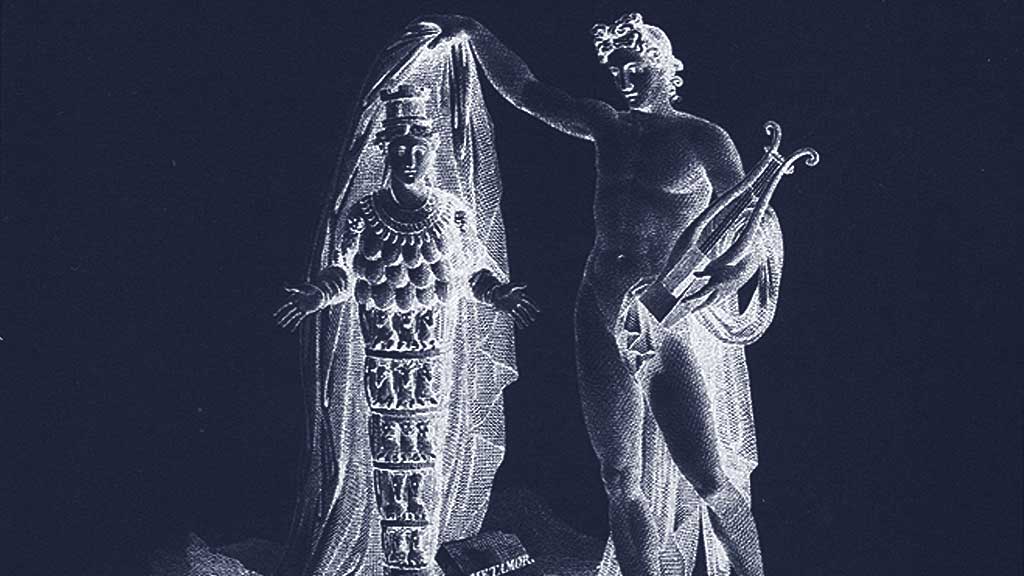 Goethe had quite an important influence on Otto Maier. Goethe, a poet and at the same time a scholar, who seemed to offer the model of an approach to nature that was both scientific and aesthetic. Let’s take a look at a peculiar dedicatory page in a published book of Humboldt and Bonpland.

From July 16, 1799, to March 7, 1804, the German scholar Alexander von Humboldt, together with the french botanist Bonpland, had embarked on an extraordinary journey of scientific exploration in South America. The first result of these years of discoveries was a communication to the Institute of France in 1805, which was published in 1807 under the title “Essai sur la geographie des plantes”. A German version of this work was published in Tubingen in 1807, under the title “Ideen zu einer Geographie der Pflanzen”, with a dedication to Goethe, intended to give public recognition to Humboldt’s debt to the author of “The Metamorphosis of Plants”.

This dedicatory page was adorned with an engraving made after a drawing that the Swedish sculptor Thorvaldsen had conceived to respond to the wishes of the great explorer. This allegorical engraving, which is quite beautiful in itself, is a measure of how distant we are from the spiritual world in which scholars, artists, and poets still lived at the beginning of the nineteenth century. The allegory was perfectly clear to educated people of this time.

It is perfectly obscure for our contemporaries. Who is this nude personage, holding a lyre in his left hand and unveiling with his right hand the statue of a strange goddess? Which goddess is this, with her hands and her fingers spread wide apart, whose chest bears three rows of breasts, and the lower part of whose body is enclosed in a tight sheath, adorned with the figures of various animals? Why is Goethe’s book The Metamorphosis of Plants placed at the statue’s feet?

Goethe himself sketched an initial answer to these questions when he wrote, “A. von Humboldt sent me the translation of his Essay on the Geography of Plants with a flattering illustration that implies that Poetry, too, might lift the veil of Nature.” However, the contemporary reader understands this explanation scarcely better than the enigma. Why does Goethe recognize Nature in this goddess? Why does this Nature have secrets? Why must she be unveiled? Why can Poetry accomplish this task?

The statue is obviously unveiled by Apollo, the god of poetry, and she is a representation of the goddess Nature, who had emerged from a fusion between the figure of Artemis of Ephesus and that of Isis, who, according to an ancient inscription reported by Plutarch, said, “No mortal has raised my veil.”

Tradition reports that Heraclitus, around 500 BCE, deposited his book, probably without a title, in which he had summarized all his knowledge, in the temple of the celebrated Artemis of Ephesus (Asia Minor). The book contained an enigmatic saying, made up of three little Greek words -“Phusis kruptesthai philei,” which traditionally have been translated by the formula “Nature loves to hide ” although in all likelihood this meaning never occurred to Heraclitus—three words that future generations never ceased trying to interpret.

They provide us with a glimpse of what maybe the beginning of reflection on the mystery of reality, but perhaps also of the end result of a long meditation, come down through the mists of the ages. Artemis, she too was a strange and enigmatic figure, emerging from prehistory. The three Greek words “phusis kruptesthai philei,” uttered and written by Heraclitus, were always heavy with meaning: heavy with the meaning Heraclitus gave them, and heavy with the meaning future centuries were to believe they discovered in them.

For a long time yet, perhaps even forever, they will maintain their mystery. Like Nature, they love to hide. In order to try to understand, we must rather compare Heraclitus with Heraclitus, or at least with authors not too distant from him in time. As far as Heraclitus himself is concerned, the possibilities for comparison are unfortunately very limited: there are only 126 fragments of his work preserved, or a dozen pages at the very most. These fragments appear in the form of short sayings or enigmatic aphorisms which tend to adopt an antithetical structure that thereby reflects the very constitution of reality, in which contraries coincide.

What Is Born Tends to Disappear – Heraclitus 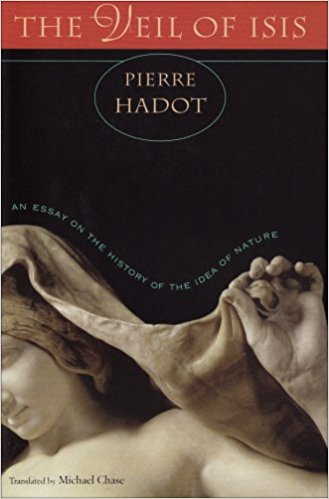 The Veil of Isis
Amazon
The Veil of Isis, by Pierre Hadot is a good source and good read to get deeper into these matters. As the subtitle of his book points out, it is an “essay on the history of the idea of nature.” This “essay” tracks, in minute fine detail and across a massive historical scenery, the evolution of 3 tropes which have allegedly figured out the human connection to nature and to science:

(2) nature as “loving to hide,” as Heraclitus said; and

This constellation is associated by the typical metaphor of unveiling. Hadot partitions his book into 8 sections and 23 chapters. He is at his most philosophically provocative in the first three parts of the book (Chapters 1-8), which handle the coverage and meaning of Heraclitus’ aphorism.

Parts IV-VI (Here Hadot contrasts 2 types of mindset when it comes to nature’s secrets, one technological or “Promethean,” the other poetic or “Orphic”) contain a lot insightful material but display at the same time a downside of VI, that is an overpowering amount of references to historical, artistic, poetic, and scientific characters and texts.

Although these revelations affirm his erudition, Hadot’s choice to incorporate even the most obscure characters or citations in the main body of the text, instead of hiding them away in the notes (which still run to nearly 70 pages), makes it quite difficult for the modern reader to keep track of his key points. In the last 50 pages, Hadot covers a vast territory, one perhaps as rich as that of all the preceding pages.

Against the Promethean assault on Nature, squeezing forth “her” secrets so as to let man dominate her for his profit, Hadot contrasts the more tender, so-called Orphic approach. The Orphic naturalist also seeks to discover Nature’s secrets, but does so “while confining [him]self to perception, without the help of instruments, and using the resources of philosophical and poetic discourse or those of the pictorial arts” (p. 155). Generally speaking, the Orphic approach assumes nature’s secrets to be accessible only through “discourse,” specifically one that somehow “imitates the artistic game of that poet of the universe, the divinity”

Chapter 21, “The Sacred Shudder,” discusses how the aesthetic approach “necessarily also … introduc(es) an emotional, sentimental and irrational factor into the relation between humanity and nature” (p. 263), specifically the terror we experience in the face of nature’s sublimity. As he puts it: “The unveiling of the statue of Isis tended more and more to lose its meaning of discovering the secrets of nature and gave way to stupefaction in the face of mystery” (p. 283). Strangely, speaking of “shudders”, Hadot makes nothing of the striking fact that Nature as the many-breasted Isis is depicted so unnaturally, certainly monstrously and grotesquely: why is Nature shown as a freak of nature?

Indeed “No mortal has raised my veil.”