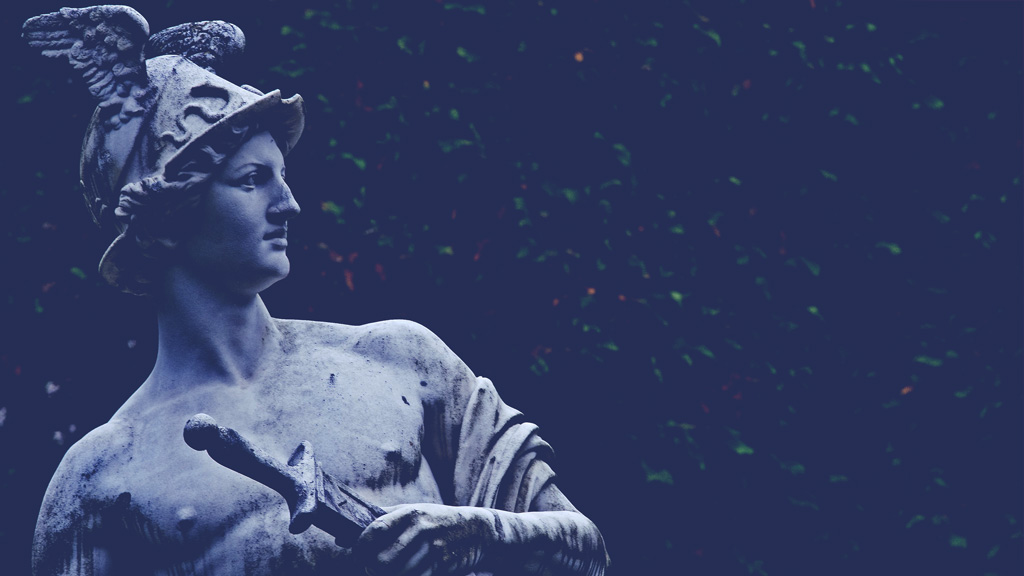 from Antiquity to modern times

Just as the daylight penetrates at dawn through every crack and crevice, says the author of the Homeric Hymn, so Hermes slipped silently in through the keyhole of the cavern which gave him birth. How plastic, mobile, and ambiguous is the nature of this god, whose feminine companions are Hermione, Harmonia, and above all Iris, who precedes him with breezy feet and wings of gold!

In Greek mythology, Hermes appears as an engaging and complex figure, in forms both mobile and definitive, so that one must first know these myths in order to follow his tracks through the long path of the Western imagination, from the Middle Ages to the present.

They are the essential reference, like the omnipresent background of a picture: so familiar, or at least so accessible to us that there is no need here to retell the stories in which Greek Hermes, or Latin Mercury, plays the protagonist, the hero, or a walk-on role. Let’s just recall some of his characteristics that have been constantly repeated and emphasized from Antiquity to modern times.

Two of these traits stand out from the tangled undergrowth: first, his guiding function, linked to his extreme mobility; second, his mastery of speech and interpretation, warrant of a certain type of knowledge.

Virgilius, well aware of Mercury’s plasticity, describes how the lively messenger of the gods controls wind and clouds with his magic wand, flying through them like a bird. But this traveler does not follow strict or planned itineraries: as Karl Kerényi suggests, he is more of a “journeyer” than a “traveler.”

Just as the geographical goal of a honeymoon is of little importance, so Mercury wanders about and communicates for the sheer pleasure of it. His route is not the shortest distance between two points: it is a world in itself, made of serpentine paths where chance and the unforeseen may happen. Hermaion means “fallen fruit” or “windfall.”

To profit from windfalls does not exclude the possibility of giving destiny a slight nudge, through tricks and subterfuges. Thus one sometimes finds Hermes unearthing hidden treasures; and it is only a short step from there to making off with them! “Hermes –Hermaion– in common!” said the Greeks on making a lucky find, just as one says in English “Equal shares all round!”

In the same spirit, eclecticism is justified-and plagiarism, too; but “stealing” is not a good rendering of the Greek kleptein, which suggests rather the idea of a ruse, in the sense of a “secret action.” (Compare the German word Täuschung, and the charming verb verschalken. And is not hermeneutics all about bringing hidden treasures to light?

Hermes, unlike Prometheus, steals things only in order to put them back into circulation. Thus one could speak of his function as psychopomp as encompassing the “circulation” of souls.

This function is dual, for Hermes is not content merely to lead souls to the kingdom of the dead: he also goes there to find them and bring them back to the land of the living. Through all his varied representations in folklore, art, and literature, the Western imagination has always stressed this relational aspect of Hermes, which is the common denominator of attributes that range from the transition of souls to thievery, also touching on commerce, magic, poetry, and learning.

Athenaeus and others ascribe to Hermes the glory of discovering the arts and sciences, while the Homeric Hymn makes him the inventor of the seven-stringed lyre. He is the master of knowledge, or rather of a means of attaining to a knowledge that may be gnostic, eclectic, or transdisciplinary—or all of these at once. Perhaps he is largely indebted to Plato for this.

Not long after the Plutus of Aristophanes, where Hermes appears in a comic role, Plato’s Cratylus derives his name from the Greek word for an interpreter: “I should imagine that the name Hermes has to do with speech, and signifies that he is the interpreter, or messenger, or thief, or liar, or bargainer; all that sort of thing has a great deal to do with language”.

This is the only aspect retained by the New Testament, in Acts 14, where the inhabitants of Lystra take Paul for Hermes because they find him a master of words. Thus poets and philosophers also revere him.

Virgilius’ contemporary Horace places himself under the special protection of Mercury. Lucian, in Fugitivi (XXII), shows Hermes accompanying Heracles and Philosophy in their pursuit of the Cynics, because Apollo says that it is Hermes who can best distinguish the true philosophers from the false ones.

His is the role of the sage—even a facetious and playful one—rather than the hero: the trait emphasized by the Iliad. The world of that epic is definitely not that of Hermes, who does not even appear there to guide a soul, and keeps himself aloof from all heroic action. He opposes Leto, but dodges aside and will not face her.

Zeus sends him to Priam, who wishes to get the body of his son back from Achilles; he is less a messenger than a guide, and it is he who prepares the escape by putting the guards to sleep.

Wotan, who was already recognized by the Romans as comparable to Mercury (Tacitus, Germ. IX), also has characteristics of this kind. Furthermore, when this Germanic god finds himself in certain comical predicaments, we sense that Harlequin is not far away: the clown whose stick or wooden sword is nothing but a puny caduceus…