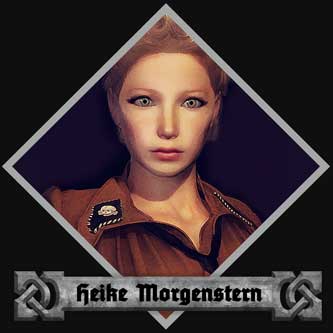 Heike Morgenstern has strong ties with Oskar Gross. Morgenstern's mother was Oskar Gross' aunt on his mother's side. The family Morgenstern, ancient nobility, lost their entire fortune and their home (a castle) in Westphalia due to the German hyper-inflation tragedy. After this misfortune, Oskar Gross offered the family shelter and a place to stay in his house. Heike's proud father committed suicide some months later. In the 1930's Dr. Feldmann became the new owner of the family castle. Heike developed a deep hatred to the bank-dynasties and the government. She swore revenge for her father's suicide and the lost of the family fortune. She loves hunting and her best proficiency was marksmanship, her skills were spotted by Capt. Holle from the H-kommando. Holle recruited her to the Hexenkommando due to her confidence in Heike's abilities and dark cravings for revenge. Morgenstern made her first appearance in the Maier files story in a later stage.