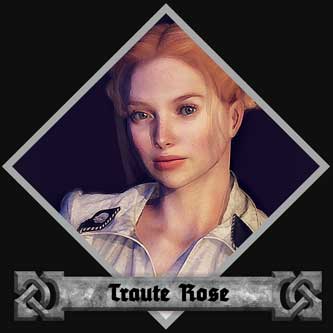 Traute Rose is one of the main characters in the Maier files series as she's  taking a prominent role within the story. Hailing from the historical witch region the Harz, in central Germany,  lady Rose has a sixth sense. She is member of the mysterious Hexenkommando, an elite group of 'witches' involved in the occult, espionage and contra-espionage during World War 2. She has a brother serving as an Ace fighter pilot in the Luftwaffe, nicknamed Schutzengel - Guardian Angel.

She carried out many different secret missions and rumblings suggest that she had something to do with the disappearance of Otto Maier late 1944.  This is the main reason why she was on the most-wanted list of the Gestapo by the end of 1944. In the early months of 1945 she too vanished into thin air. It's undeniable that she was one of the operatives involved with the infamous Operation Kelch (Unternehmen Kelch) in Scotland, 1939. She's a quite fierce lady with deep waters.