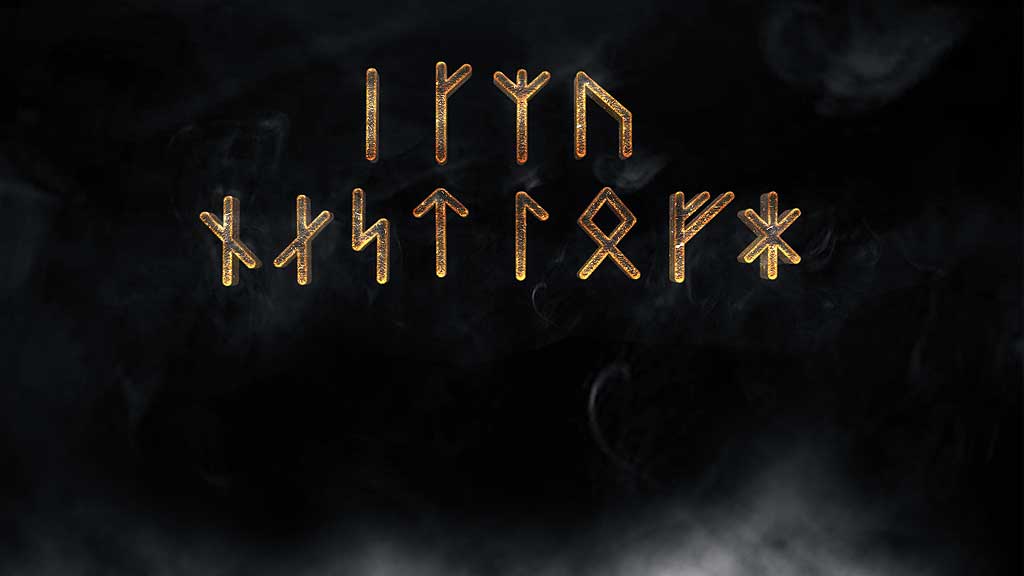 The secret teachings of the Albruna Gudrun

From his seat in Asgard, Odin, observed the Norns at the base of Yggdrasil, and envied their skills and their foresight. The god twisted his will toward the undertaking of coming to know the Runes.

The native home of the runes is the Well of Urd with the Norns and since the runes do not reveal themselves to any but those who prove themselves worthy of such fearful insights and abilities, Odin hung himself from a branch of Yggdrasil, pierced himself with his spear, and peered downward into the shadowy waters of the well.

He forbade any of the other gods to grant him the slightest aid, not even a sip of water, then the god gazed and gazed downward and called to the runes.

Odin survived in this state, on the edge of death for no less than nine days and nights. Toward the end of the ninth night, he finally saw shapes in the depths of the well: the runes! They had welcomed his sacrifice and shown themselves to him, uncovering to him their form, as well as the secrets that exist in them. Having altered this learning in his considerable memory, Odin finished his trial with a shout of delight.

The secret teachings of the Albruna Gudrun

The Rune practitioner can unlock the mystery of each Rune through practical exercise and experience of it. This means that the rune will open the way to the rune power hidden in its symbolic glyph. Now, the secret Albruna-sequence has an esoteric significance that is solely revealed through practice.

Each rune of this sequence is to be practiced for a fortnight (14 days) before going on the next rune. On average, the runer should be able to sustain the exercise for ten minutes, but he or she is urged to practice as often as possible. Although ultimately the sequence is constructed to form a powerful ritual of combined runic forces, each individual rune is to be mastered in its unique expression at this stage.

The orientation of the body for most of these exercises IS to the north.

Albruna Gudrun: “Your Rune practice involves a number of physical exercices that permit you to experience the form and the flow of each rune in the body. The postures are important not to forget the physical, exoteric side of reality. Where you divide body and consciousness you are violating both. Flesh is the medium of interaction with the world a vehicle of communication and need not to be a prison or a trap… “

Albruna Gudrun: “My secret will be found in the curriculum of a total of 12 Runes extended with the Hidden One, performed in a specific order.”

As has been mentioned repeatedly, rune practice involves a number a physical exercises that permit the practitioner to experience the form and flow of each Rune in the body. These exercises have beneficial effects on body, soul and mind, they give reality to the abstractions of the symbolism, they evoke and earth the current. The energy flows at all times of our lives, without it, we would not live at all. Practicing the Rune stance improves the clarity of perception, the ability to open up and accept the flow of the energy current and to channel the energy as accords with will. 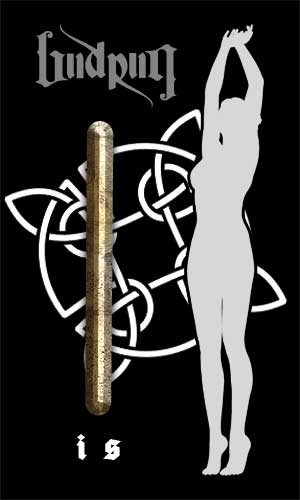 Albruna Gudrun: “The Rune stance or posture is an old tradition. All starts with the IS Rune. Out of ice, out of IS. It’s the first stance of my secret Rune sequence.”

The first Rune IS in the Albruna Sequence

IS rune = ice the associated sound is “i” (English “ee” as in beer, feet, etc) Ego, will, activity, personal power, banishing, consciousness of spiritual power, control of self and others. IS is the only Rune that never varied, no matter which futhorc version was used. The sign remained as it is. The root is EIS – ice and frost. Ice is cold, beautiful and dangerous. The I-posture has a sobering effect. A single line to bind heaven and earth. I is also connected with iron and the Valkyrie ice (the sword).

In the Albruna teachings the apprentice needed to practice the Rune posture as shown for 14 days. Using the mantra iiiiisssss, or simply iiiiii. Practice drawing power from both above and below.

When drawing force from below upwards, the runer sings the I-tone from a low pitch rising to a high one, drawing it from above to below and vice versa.

Thoughts are to be focused on concentrating magical forces for the development of the self and on drawing these forces to yourself and holding them there. IS-Rune is the basis of the self and of the work to come- the main-stave, or head-stave, of all Runes and thus the first in the Albruna Sequence.

— Ka, Ken, Cen is a mysterious Rune. And its symbolism refers to the human expression of fire and not the solar fire nor the ancient fire.

One can see a torch in it. Some claim that Ken comes from Kuna, which is a “young maiden”. If we view it as a cleft, this might work, but at the same time a phallic symbol is equally valid. Both of them are fiery … The Old English Rune Poem goes like this:

every living man knows Cen
by its pale, bright flame,
it always burns
where princes sit within 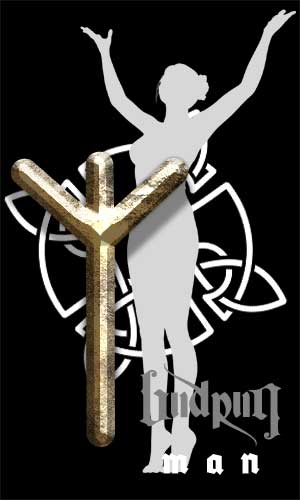 — Minna was originally “memory”. A minnesaenger was a travelling musician who played love songs at the courts. But he also sung about the ancient folktales, the folk heroes and the ancient beliefs from the forefathers. There was also the custom of drekka minni, which translates into “to drink minne” out of the mindebaeger (the minne cup) – i.e. to drink in honour of someone. Such minne cups were often adorned by a frieze of man rune signs … Embrace all in yourself and you will rule all!

The MAN-rune is a powerful tool for interacting with the upper zones, or with the divine realms. They stated that the runer will be expanded into a new mystic experience in which the runer is flooded with waves from the upper zones and gains direct communication with the Graal/Grail itself. 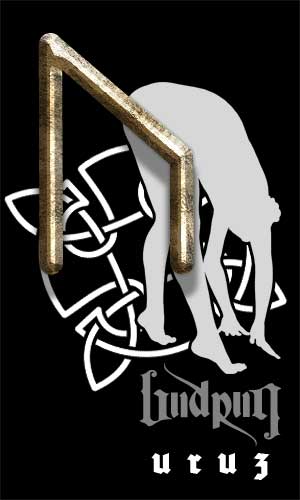 Mind over matter  – Matter over mind

The Uruz rune has many interpretations. As the Ur describes a species of wild oxen that is extinct nowadays.

The Ur or Aurox was famed for its courage and primeval wildness. Others consider Ur as reference to Urda’s well. In the German language the prefix ur means things of great age.

Though Uruz energy is not suited for easy, conscious control as Fehu is. It is the rune of powerful unconscious shaping energies that need to be guided wisely as they manifest. It is an early reminder within the series that the untamed powers of creativity are not without danger …

NOT makes you aware of your pitfalls, and it helps remove ‘bad karma’. Banishing misfortune by accepting the decisions of the Norns. 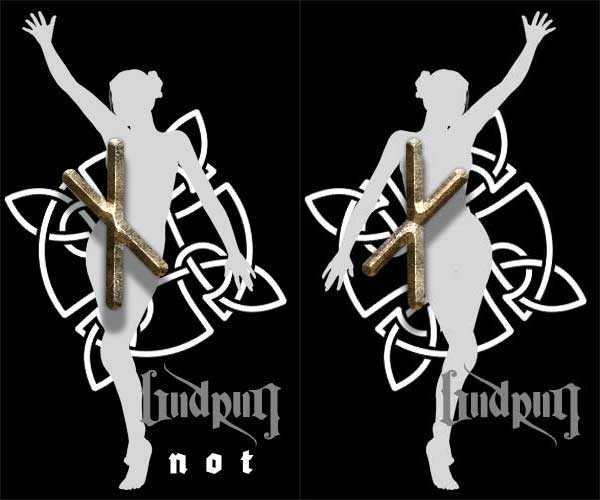 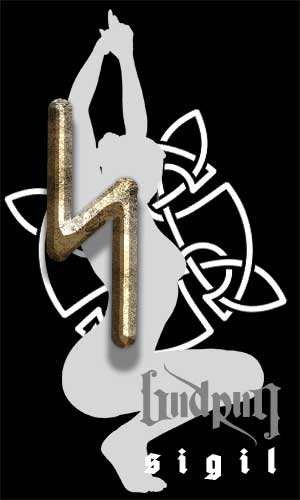 — Sigel is a solar rune. In the 18 rune system it’s the Siegrune. Sieg means Victory. And the Sigel Rune is for sure a power rune. It symbolizes the lightning flash, divine fire that fell from the skies.

We know Siegfried, Sieglinde, Sigmunde, Sigdrifa, etc. Sigdrifa was a powerful Valkyrie who knew Rune magic and adviced Sigurd. Translated into the body posture the Sigel or Sieg Rune  suggest somebody squatting.

This rune was a part of the solar wheel or a swastika. This goes back to the ages when the ancestors celebrated the solar festivals by rolling huge fire-wheels down hills. Another aspect of the Rune signifies blessing, joy, happiness. 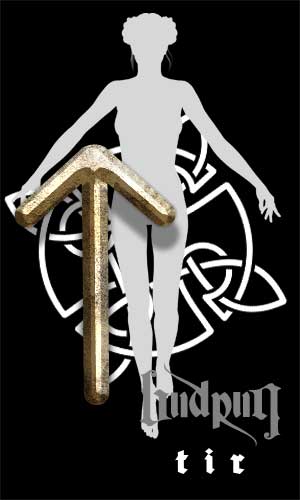 Tir has a peculiar and complex range of different interpretations.

At first sight the rune shows a Spear or an arrow. A spear wounded Odin and an arrow killed Balder. It are tools of blood letting. Also the arrow and spear points in a direction, which could mean evolution, development suggesting motion.

The spear points at the Tir-star, Polaris the pole star. Tiu, Tiwaz Tir is one of the oldest Indo-European deities. Sometimes a war god sometimes the Twinned one. Twisto, in folklore the twilight traveller, later the double one or devil. The Tir-star is the nail that holds the worlds in place and around which the heavens revolve.

Tyr is the one handed god
and leavings of the wolf
and prince of temples
Mars.

Lagu or Laf is a rune of water, a lake, sea, a ‘loch’. In some other sense the rune has to do with Love, love making libido and Law. 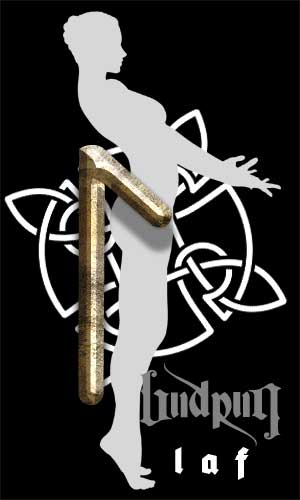 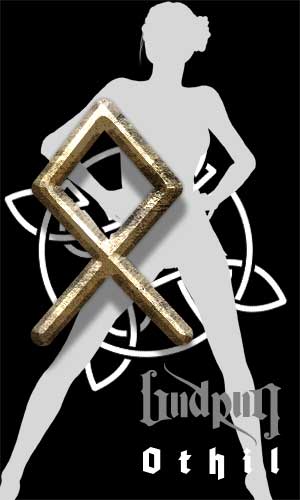