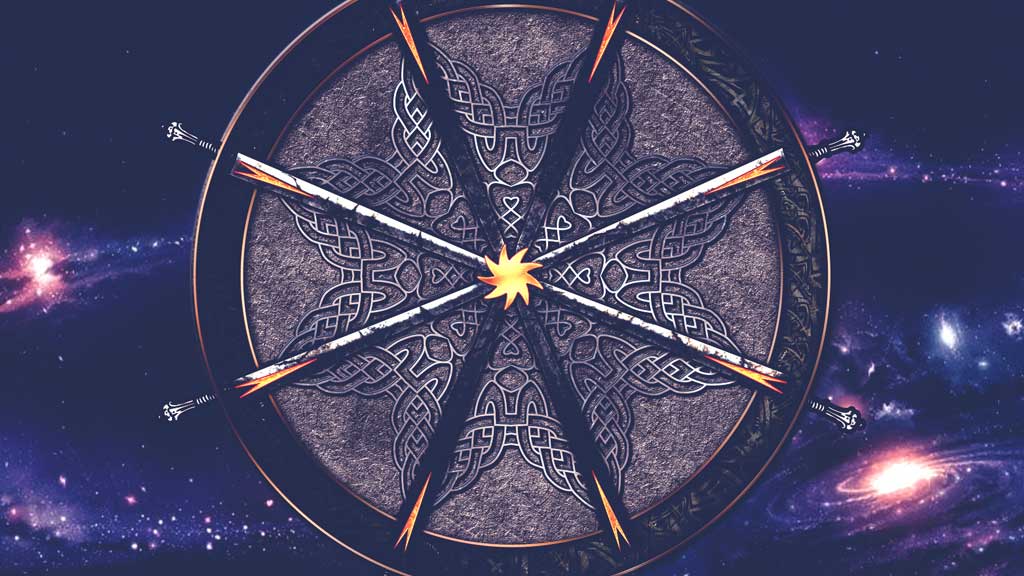 A Celtic and Germanic Journey through the Year

The 8 ancient festivities for each sign an essential point in nature’s yearly cycles. They are generally portrayed as 8 equally spaced spokes on a wheel symbolizing the year in total; the days on which they fall are approximately equally spaced on the calendar, as well.

The wheel of the year consists of two sets of four holidays for each. One can find four sun-festivals linked with the sun’s position in the sky, dividing the year into quarters: the Spring Equinox, the Summer Solstice, the Fall Equinox, and the Winter Solstice, all of which are dated astronomically and therefore differ somewhat every year. Falling in between these quarter days are the cross-quarter holidays, or the so called fire festivals: Imbolc, Beltane, Lughnasadh, and Samhain. The quarters are occasionally referred to as the Lesser Holidays and the cross-quarters the Greater Holidays, however not any cycle is “superior” to the other.

The Winter Solstice, also called Yule, Jul or Midwinter, occurs when nighttime has reached its maximum length; after the solstice, the length of the days will begin to increase. Though the cold darkness is upon us, there is a promise of brighter days to come. In Ancient lore, this is the time when the young solar god is born. Candles are lit, feasts are enjoyed, and evergreen foliage is brought in the house as a reminder that, despite the harshness of winter and darkness, light and life have endured.

At Imbolc, the ground is just starting to thaw, signaling that it’s time to start preparing the fields for the approaching sowing season. This holiday is also called Brigid’s Day. Imbolc, yet another symbolic way of pleasing the now perceptibly stronger light. On the Spring Equinox, also known as Ostara, night and day are again equal in length, and following this, the days will grow longer than the nights. The Spring Equinox is a time of renewal, a time to plant seeds as the earth once again comes to life. You have to imagine what life was like in Europe in antiquity. Consider that the things we take for granted were completely absent at that time.

In agricultural societies, Beltane / Walpurgis marked the start of the summer season. Livestock were led out to graze in abundant pastures and trees burst into beautiful and fragrant blossom. Rituals were performed to protect crops, livestock, and people. Fires were lit and offerings were made in the hopes of gaining divine protection. In Ancient mythos, the young sun-god impregnates the young goddess.

The Summer Solstice is the longest day of the year. It’s also called Litha, or Midsummer. Solar energies are at their apex, and the power of nature is at its height. In Ancient lore, it’s the time when the sun-god’s power is at its greatest (so, paradoxically, his power must now start to decrease), having impregnated the maiden goddess, who then transforms into the earth mother.

At Lughnasadh, the major harvest of the summer has ripened. Celebrations are held, games are played, gratitude is expressed, and feasts are enjoyed. This is the time to celebrate the first harvest. To celebrate the grain harvest, bread is often baked on this day.

The Autumn Equinox, also called in Celtic regions Mabon, marks another important seasonal change and a second harvest. The sun shines equally on both hemispheres, and the lengths of night and day are equal. After this point, the nights will again be longer than the days. In connection with the harvest, the day is celebrated as a festival of sacrifice and of the dying god. A tribute is paid to the sun and the fertile earth.

To the Celtic people, Samhain marked the start of the winter season. It was also called Blood-month, it’s time when the livestock was slaughtered and the final harvest was gathered before the inevitable plunge into the depths of winter’s darkness. Fires were lit to help wandering spirits on their way, and offerings were given in the names of the gods and the ancestors. Seen as a beginning, Samhain, Halloween was in many Germanic and Celtic regions New Year.