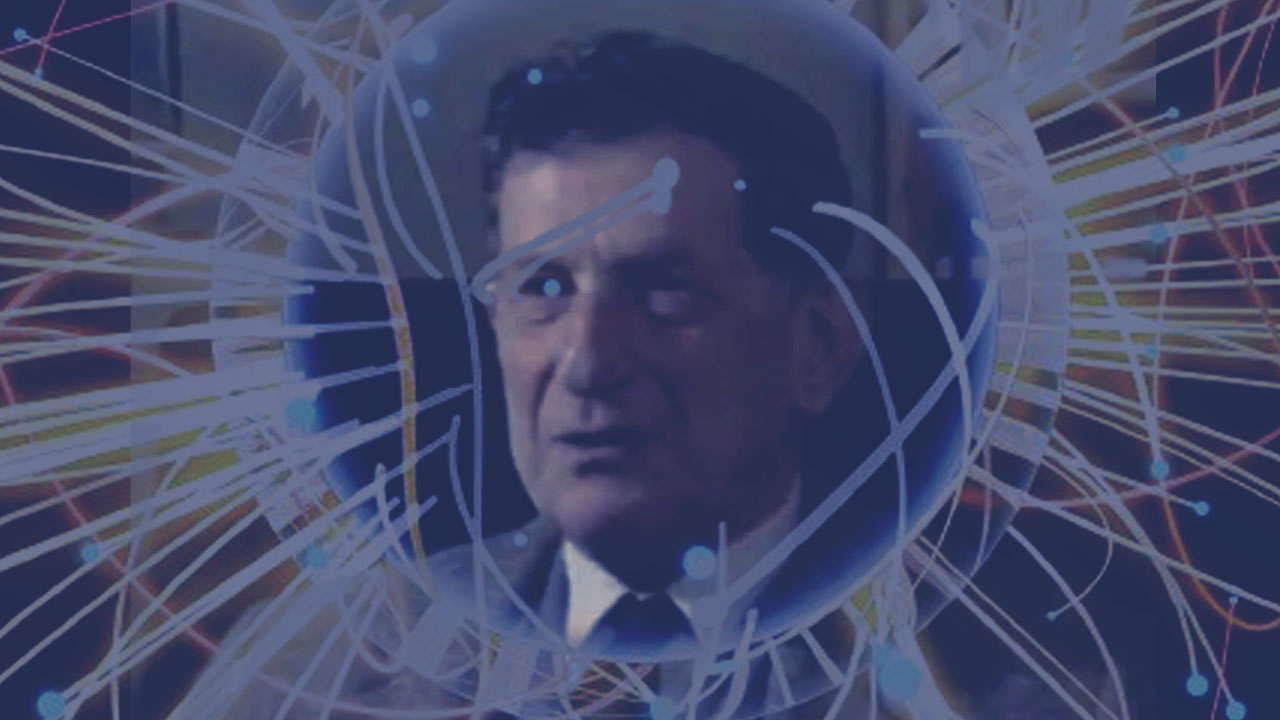 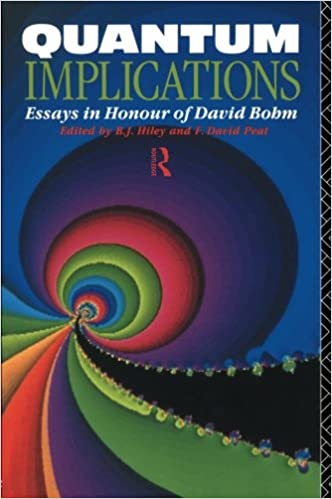 David Bohm is one of the foremost scientific thinkers of today and one of the most distinguished theoretical physicists of his generation. His challenge to the conventional understanding of quantum theory has led scientists to reexamine what it is they are doing and to question the nature of their theories and their scientific methodology.

Quantum Implications is a collection of original contributions by many ofthe world’s leading scholars and is dedicated to David Bohm, his work and the issues raised by his ideas. It is a tribute to his creative imagination, his single mindedness, his inspirational guidance, and his complete dedication to the further understanding of the fundamental issues in physics, philosophy and the general intellectual well-being of mankind.

The contributors span a wide range of disciplines including physics, philosophy, mathematics, psychology, biology and art, and all are experts in their own fields. They include some of the most distinguished scientists of the day and number three Nobel laureates among them.

David Bohm has himself contributed a paper on hidden variables and how his ideas relate to the implicate order. There is an excellent introduction by the editors, putting Bohm’s work in context, explaining its more subtle points and setting right some of the misconceptions that have persisted about the work of David Bohm.

David Bohm was born in Wilkes-Barre, Pennsylvania, in 1917. His father ran a successful furniture business, making his way to the USA from what was then Austria-Hungary. There appears to be no physics whatsoever in the family background. Bohm, himself, became interested in science at an early age, being urged on by a fascination of finding out how things worked.

By the age of eight he had already been introduced to science fiction. This fired his imagination and generated in him a deep interest in real science. But it was the nature of the real world that fascinated him most. He recalls the profound effect that a book on astronomy had on him in those formative years. He was struck by the vast order and regularity of the universe.

This impressed him so much that he began to devote a great deal of time to science. Needless to say, his father became somewhat concerned about the boy’s future. Being a successful businessman, he could not imagine how anyone could make a living out of ‘scientism’ as he insisted on calling it. Young David took this as a challenge and using his earlier interest in redesigning mechanical devices he decided to try to make money out of inventing. He was rather proud of one invention in particular: namely, a ‘dropless pitcher’.

The substructure of matter

As he began to study physics seriously, he was repeatedly struck by the interconnectedness of what, at a superficial glance, seemed to be totally unrelated phenomena. As he delved deeper into the substructure of matter and its movement, this characteristic of a rich and highly interconnected substructure became more and more apparent. Furthermore, as Bohm saw it, these deeper structures seemed to possess properties which did not reflect the way physicists were talking about the behaviour of matter.

In quantum mechanics, for example, it seemed that this interconnectedness was vital, yet the usual presentation of the subject seemed to minimise this aspect of the phenomena. In Bohm’s original perception., this notion ofinterconnectedness was rather vague and ill-defined but with its continual reappearance in different forms, the notion slowly took shape, ultimately leading to a very radical and novel way of looking at reality.

This view eventually crystallised into what he now terms the implicate order. But much was to happen before that idea eventually became clear. The first formal indication of Bohm’s departure from orthodoxy can be traced to his reformulation of quantum mechanics published in Physical Review in 1952.

But the ideas that lay behind that formulation seem to many to be totally against the spirit of his later work on the implicate order, so much so that they find it hard to see any connection at all. It is true that those papers were more intent on demonstrating that there was another logically coherent interpretation of the quantum mechanical formalism, other than the usual one. But it is the ideas implicit in this reformulation that have connections with the notion of the implicate order.

Bohm’s interest in the fundamental questions of physics start.ed at high school. Even at that early stage he was beginning to ask how the theories of physics enable one to build up an understanding of reality. At college he soon quickly became fascinated with quantum mechanics and relativity as he began to study these subjects in depth for the first time.

After graduating he began his research project under the supervision of Robert Oppenheimer. His dissertation topic involved a theoretical study of neutron-proton scattering. Yet even while working on this technical problem, he kept up his interests in fundamentals, always probing deeper into quantum theory and relativity. He remembers his long discussions with Joseph Weinberg, who had made a study of Bohr’s point of view. During that period he admits to becoming a supporter of Bohr’s position.

Before receiving his doctorate in 1943 from Berkeley, he moved to the Radiation Laboratory where he worked on problems connected with the later phases of the Manhattan Project. He was involved in a theoretical study of the ionisation of uranium fluoride in an electric arc which formed part of the broader study of the problems involved in the separation of 235U from 238U.

Thus began his interest in plasma physics, to which he made some outstanding contributions. Although much of this work was basically involved in technical problems, Bohm could not help noticing the philosophical implications. The individual particles in the plasma were highly correlated and behaved like an organic whole rather than a mechanistic system.

The plasma constantly regenerated itself and surrounded all impurities with a sheath so as to isolate them completely. To understand in more detail how the plasma functioned, it was necessary to study the relation between the individual and the collective modes of behaviour. It was here that he introduced the idea of collective co-ordinates and developed a general way ofhandling plasmas. When he took up the post ofassistant professor at Princeton University he extended his earlier ideas to study the behaviour of electrons in metals, where quantum mechanics played an essential role. It was his innovative work in this area that established David Bohm’s reputation as a theoretical physicist.

The textbook Quantum Theory was first published by Prentice-Hall in 1951 and is still in print today. It is generally regarded as one of the best textbooks of its day. Apart from a clear presentation of the main physical ideas lying behind the formalism, the book has the additional merit of discussing some of the more difficult aspects of the theory usually omitted from modern texts. For example it contains sections on the approach to the classical limit, the measurement problem and the Einstein, Podolsky, Rosen (EPR) paradox.

The latter was of particular importance since it reformulated the EPR example in terms of correlated spin one-half systems. This discussion not only clarified the essential issues raised in the debate but also led to the suggestion of using positronium decay and optical cascades in actual experiments designed specifically to explore the consequences of EPR situations. These experiments have been significant in moving the continuing debate from what was generally regarded as a realm of speculative philosophy, or even theology, into hard physics. All three of the above topics are still the subject of many current research papers.

The aspect of Metaphor

David Bohm’s work has always held a particular fascination for the artist for, while the physics may be inaccessible, Bohm’s essential approach to nature is sympathetic to their nature. John Briggs explores the relationships between Bohm’s theories on the ultimate structure of matter and his own views on the structure of a work of art.

Briggs draws attention to a particular aspect of the metaphor, which he calls a reflectaphor, in which each side reflects the other and meaning lies in a continuing reflexive movement. Through an analysis of poetry, the short story and painting, Briggs concludes that in its deepest structure a work of art is built not on explicit forms but out of numerous metaphors that are woven together in such a way that each one reflects all others. Just as each part of nature represents an enfoldment of the entire universe, so each part of a work of art reflects the whole. Clearly Briggs’ approach gives insight into Bohm’s contention that a unity can exist between the artistic, scientific and religious mind.

For Montague Ullman, Bohm’s notions of enfolded order and the non-local nature of reality have a significant connection to dreams. In his paper he analyses the creative way in which images and events are woven together in the dream and discusses its essential healing nature. Ullman also believes that dreams have a social nature and, indeed, that they have a survival value for the human race.

Again there is evidence from amongst so-called primitive peoples that dreams fulfil just such a function. Here Ullman touches on one of Bohm’s current interests, for it is the latter’s belief that a form of true cooperation and harmonious society once existed amongst the early hunter-gatherers and such ‘leadership from behind’ may even be possible amongst urban society today. To what extent dreams play a role in the creative cohesion of such groups is a matter for further investigation.