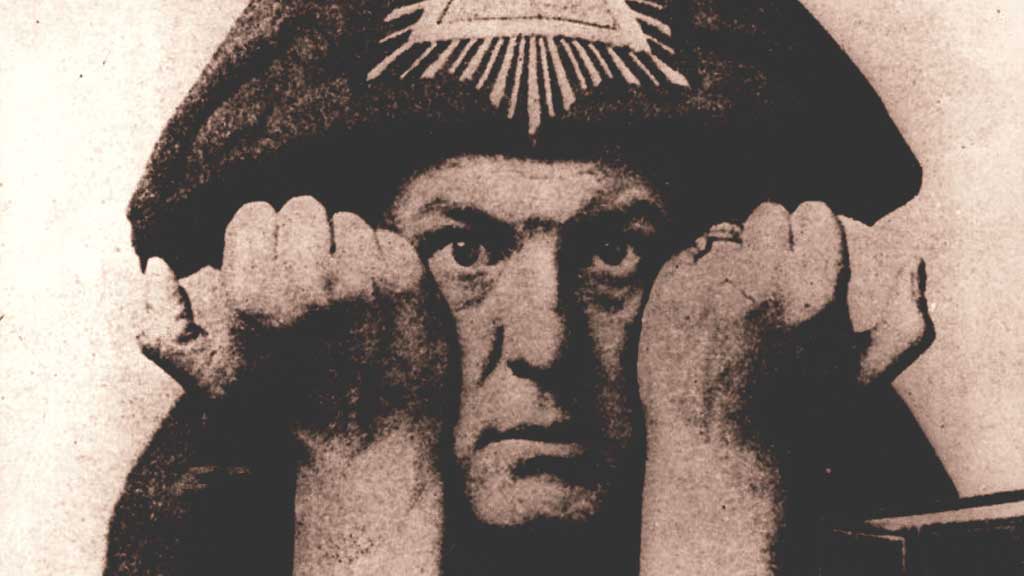 Aleister Crowley is, few would argue, the father of modern occultism, neopaganism, and New Age spirituality. Today’s Thelemites (avowed followers of Crowley and his spiritual doctrine of Thelema) far outnumber the small cadre he recruited in his lifetime.

His motto “Do What Thou Wilt” has had a subtle and profound influence on modern culture. While some still fear and loathe him, Aleister Crowley inspires fascination, even admiration, in others.

Crowley’s identification with the occult overshadows his achievements in other spheres. He was a record-setting mountaineer, an outstanding chess player, and a talented or at least popular poet and writer.

He also collected an amazingly wide array of friendships and acquaintances, albeit mostly brief, and some regretted.

Aleister Crowley had connections of but a few degrees to many of the prominent literary, artistic, and political figures of the early twentieth century. For example, his erstwhile friend and famed military theorist Col. J.F.C. Fuller was also a guest at Adolf Hitler’s fiftieth birthday celebration.

Another friend, the journalist Walter Duranty, became Stalin’s favorite and apologist. Crowley had numerous links to Churchill, among them the writer Frank Harris, a guest at Churchill’s nuptials.

Associates and the intelligence world

A large number of Crowley’s associates shared his interest in the occult. And a substantial minority were his partners in sex, drug-taking, magical rites, and other activities licit and illicit. Much less appreciated is that many of these same individuals also connected Crowley to the intelligence world.

Throughout his adult life, Crowley associated with people who were, had been, or would be spies. When one of this ilk moved out of Crowley’s life, another, as if by magic, appeared to take his or her place.

These relationships and transitions were more than coincidence. Hidden behind his occultism and real or feigned depravity was Crowley’s sporadic work as a secret agent for Her/His Majesty’s Government.

This handful of documents contained one critical piece of information. During the war, American investigators, while probing the activities of suspected German spies, discovered that “Aleister Crowley was an employee of the British Government. … On official business of which the British Consul, New York City has full cognizance.”

The main focus of Richard B. Spence’s book is on 1914-1919. First because Crowley’s clandestine activities are better documented for that period. And secondly because it was his most intense and prolonged involvement in espionage.

Nevertheless this book will also demonstrate Crowley’s long, if episodic, relationship with British and other intelligence bodies, involving many well-known historical events and persons. Using documents gleaned from British, American, French, and Italian archives, Secret Agent 666 sensationally reveals that Crowley played a major role in the sinking of the Lusitania, a plot to overthrow the government of Spain, the thwarting of Irish and Indian nationalist conspiracies, and the 1941 flight of Rudolf Hess.

If not the monster some have described, Crowley certainly was capable of immense emotional and physical cruelty. Real flashes of insight illuminate his writings, but if he developed anything to an art, it was selfishness.

It might seem that someone so obsessively self-centered and disdainful of common decency as Aleister Crowley would make a poor spy. On the contrary, those very qualities helped to qualify him for the job.

A strong, even ruthless, ego is essential for motivation and self-preservation; the only person the spy ultimately can rely on is himself. Espionage, street-level spying anyway, is at best morally suspect.

A 1950s contract agent for the CIA, George Hunter White, revealed this mindset with brutal candor when he recollected. “I toiled wholeheartedly in the vineyard because it was fun, fun, fun. Where else could a red-blooded American boy lie, cheat, steal, rape and pillage with the sanction and blessing of the all-highest?”

— Operation Midnight Climax was an operation initially established by Sidney Gottlieb and placed under the direction of Federal Narcotics Bureau in Boston, Massachusetts with the officer George Hunter White under the pseudonym of Morgan Hall for the CIA as a sub-project of Project MKULTRA, the CIA mind-control research program that began in the 1950s —

Do What Thou Wilt

Crowley, the proponent of “Do What Thou Wilt,” would have found such an environment both convivial and rewarding on many levels.

Still, what would move a man with such evident contempt for the existing order to serve, indeed risk his life for, King and Country? In his Confessions, referring to 1914, Crowley explained his brand of patriotism:

I still think the English pot as black as the German kettle. And I am still willing to die in defense of that pot. Mine is the loyalty of Bill Sykes’ dog … the fact that he starves me and beats me doesn’t alter the fact that I am his dog, and I love him.

Crowley was a pariah and spiritual rebel, but he also longed for the “regular life of an English Gentleman”. His role as a secret agent appealed not only to his ruthless, amoral side, but also to a profound sense of Englishness and an idiosyncratic but genuine sense of honor and duty. – src. Jonathan Spence