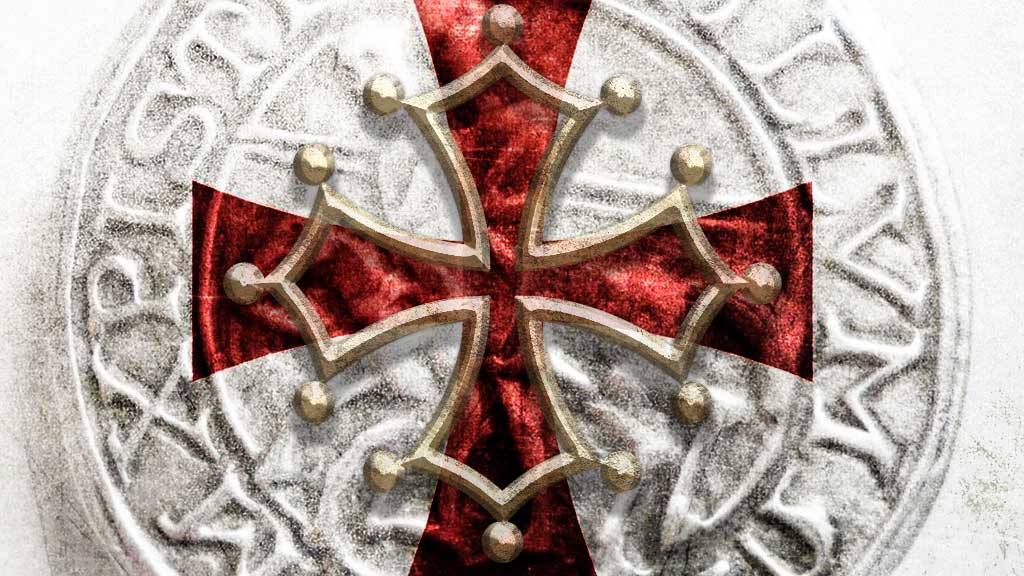 The French historian Raimonde Reznikov’s book ‘Cathares et Templiers’ can be something of a scholar’s antidote to the wilder extremes of conspiracy mongering. As reported by Reznikov, besides the evident link that Templars and Cathars were suppressed by shared conspiracy between state and church, the solely genuine sympathetic link originated from the imaginations of eighteenth-century Freemasons.

She writes:
The Templar mythology, fabricated in the 18th century in the bosom of German lodges by the vanity of Freemasons, desirous to join themselves to a pretended tradition more valorous to their eyes than the builders of walls, was then considerably amplified during the religious quarrels of the 19th century.

On the one hand, ultra-royalists presented the Templars, allied to the Cathars, as being akin to revolutionaries wanting to destabilise the papacy and the social order by spreading abominable doctrines. While on the other, according to anticlerical republicans, the Templar martyrs, descendents of Cathar martyrs, became “sages indignant at seeing the people oppressed in the sanctuary of their conscience by kings, superstitious serfs and the intrigues of the priesthood.

Nowadays, needless to say, we have Masonic Templars, whose formation followed on from -Chevalier- Ramsay’s rousing “Oration” of 1736, which coupled Masonry to chivalric orders of the Crusades. Ramsay failed to indicate these Templars, but the term temple performed its own magic and sealed the identification. No one ever called their lodge a “hospital,” so the Knights Hospitalers of St. John have tended to take second place in Masonic interest to the bloodthirstiness of the Templars. Truthfully, Reznikov’s book demonstrates that the Hospitalers had better connections with Catharist noble families in the Languedoc than the Templars. Reznikov’s map shows that the Templars’ presence in the region, compared to that enjoyed by the Hospitalers, was relatively slight (the book gives excellent detailed breakdowns of the places and people linked to the Hospitalers, Catharism, and the Templars).

Reznikov’s work and splendid research makes it absolutely clear that there was no mutual interest between Cathars and Templars whatsoever, taking it for granted that alleged proto-Masonic links are just childish fantasies.

Raimonde Reznikov is quite clear about the nature of the real Templars: “The knights of the Middle Ages did not enter a military order to acquaint themselves with metaphysical or intellectual speculations. The real initiatic knowledge of the era disclosed itself elsewhere, in the scriptoriums of the great abbeys, at Lérins, Saint Victor or Montmajour for the Midi (South of France) and the Provence, at Glastonbury in the British Isles, and at Bobbio in Lombardy.” Furthermore, “the esotericism of the 12th and 13th centuries was as scientific as that of antiquity, having nothing in common with the lamentable accusations of the inquisition against the Templars: the old malicious and scandalous themes dragged out against all the adversaries of the Roman church since its birth.” (p.154-155)

“The spirituality of the Order of the Temple, inspired by that of St Bernard, exalted Marian devotion, glorified the Hebrew Bible -unlike the Cathars who despised it- and could not conceive of itself without an unbreakable fidelity to the Church of Rome.”

So what have they in common? Both groups were victims of alliances between the papacy and the House of France, (the Capatians), and both groups were linked by extra-Craft and peripheral Masonry, and the enemies of such groups, each to its own ends. The case for the Blood-Grail-Templar-Cathar connection, diverting as it is, evaporates into thin air. Having said that, the alleged Templar–Cathar link is not the only route to follow in seeking evidence for a religiously dissident ‘Temple’.

In terms of the question regarding dissident beliefs in the Templar order, this really leaves only two main issues: the alleged connection between the Templars and the allegedly gnostic Holy Grail (or, as von Eschenbach spells it, the Gral), a mysterious head idol and the idol called Baphomet that the Templars were accused of worshipping. In trying to find out these matters, one can easily become in the position of sporting leaden boots wading through a marshland wondering if they shall ever reach the next hedgerow, never mind the lost horizon…

To be continued …
Did the Knight Templar worship Baphomet?