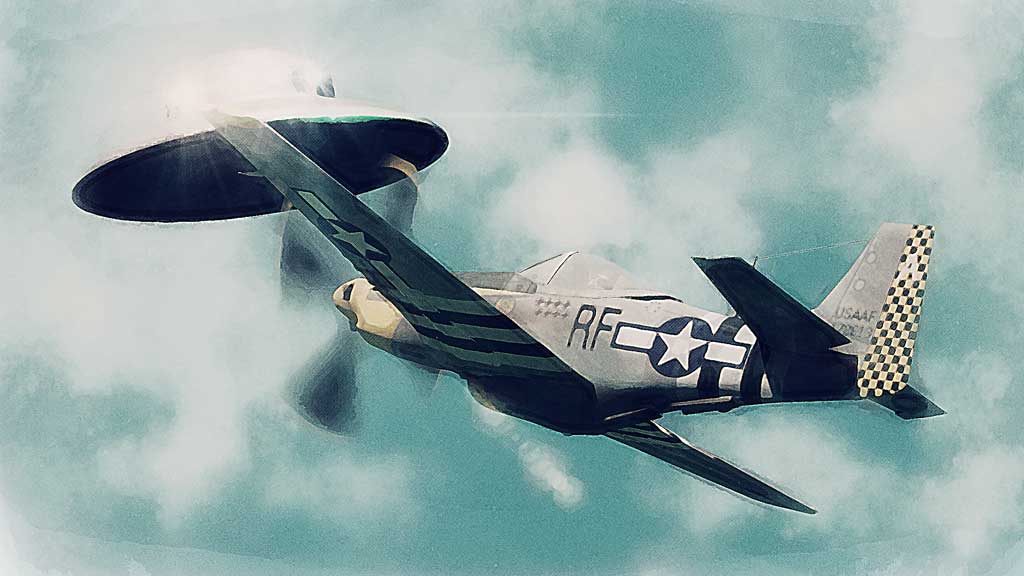 The Mantell UFO incident was among the most publicized early UFO reports.

On 4 June 1947, veteran pilot Kenneth Arnold was cruising in his private plane over Washington State’s Cascade Mountains when he saw strange batwing craft in the distance. Afterwards, Mr Arnold likened the sight and motion of the craft to “saucers skipping on the water”.

On that day, in that place, the “flying saucer” phenomenon was born. The Air Force said that Arnold had been chasing a mirage. The newspapers talked glibly of little green men. The public, brought up on pulp sci-fi stories, went out at night UFO-spotting for a lark.

P-51 Mustangs of C Flight, 165th Fighter Squadron Kentucky Air National Guard, already in the air on a routine patrol, were requested to approach the object.

The other two pilots accompanied Mantell as he ascended almost vertically in pursuit of the object, which air traffic control reportedly heard him describe as “metallic, and of tremendous size”.

Only one of Mantell’s wingmen had an oxygen mask; since he was low on oxygen, and the other wingman had none, they called off the chase at 22,500 feet, leaving Mantell to go it alone. Minutes later, Mantell’s Mustang crashed in a fiery ball at a farm near Franklin, Kentucky. His watch, stopped by the force of the crash read, 3.18. 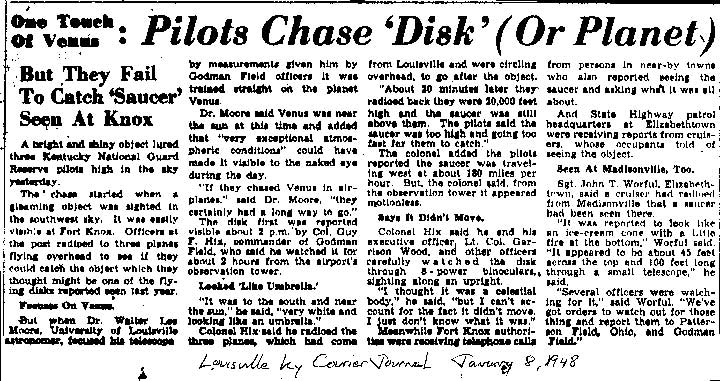 Half an hour later, the UFO was no longer visible to personnel at Godman Field. An American had died. A UFO had been sighted. Sensational rumours swept the nation, the biggest of all being that Mantell had been gunned down (rayed-down?) by a UFO.

The Mantell Incident, along with the Godman encounter, fixed UFOs in the civilian mind as absolutely, 100 per cent real. As for the military’s new research group for the study of UFOs, Project Sign, it never came to a conclusion on Mantell’s demise.

What happened to Mantell? He may have taken a broadside from a UFO phaser or “death ray” ?

A more likely explanation is that he blacked out from lack of oxygen as he climbed. And the mysterious object in the sky? Some experts propose Venus, others nominate a skyhook weather balloon, noting that the balloons at 30 metres diameter are indeed “metallic, and of tremendous size”.

At the time skyhook balloons were a top-secret US Navy project, and according to UFO doubter Philip Klass skyhooks were in the air over Kentucky that fateful day.

Truth to tell, the skies of America at the beginning of the Cold War buzzed with top-secret craft, and the Air Force deliberately pumped-up UFO sightings to distract the public – and the pesky Russkies – from what they were really up to. Mr. Lyne has written two books concerning saucers, field propulsion and tests done with German weaponry after WW2. See article, German Field Propulsion Saucers below.