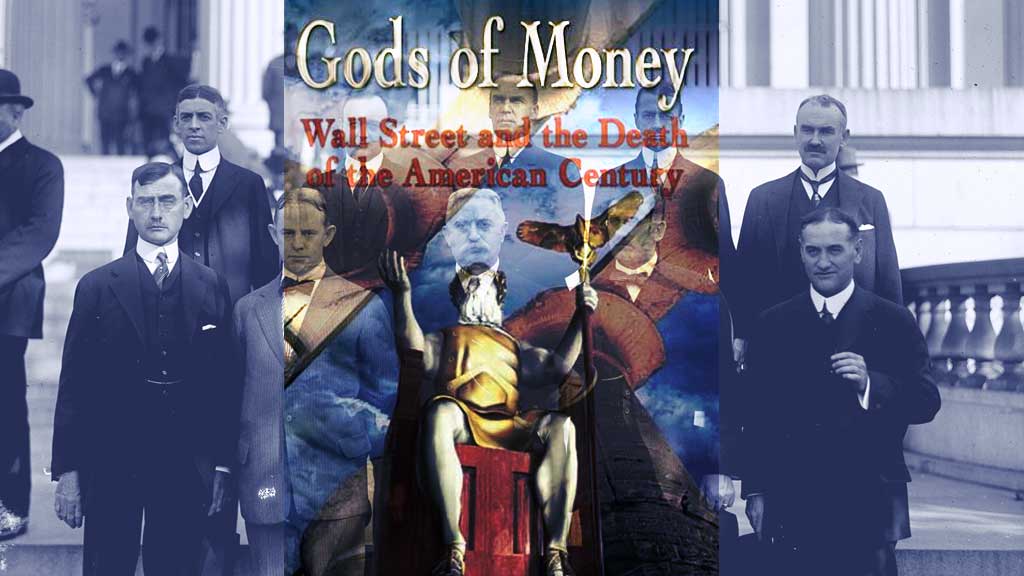 Wall Street and the Death of the American Century

In 1913, Minnesota Congressman Charles August Lindbergh Sr., father of the famed aviator, wrote Banking, Currency, and the Money Trust, in which he accurately described the political agenda of the Wall Street international bankers who were shaping the creation of a new central bank and with it, control over the nation’s economy.

As a Republican member of the US Congress Lindbergh wrote exposing the secret machinations of powerful Wall Street financial interests, their efforts to sneak through a piece of legislation that, more than any other single bill, has shaped the future history of the nation and much of the World—the Federal Reserve Act.

It was passed by an almost empty Congress and signed into law by President Woodrow Wilson—a crony of Wall Street—on Christmas Eve, 1913. Lindbergh described the influence of what he accurately named the Wall Street Money Trust in that de facto bankers’ coup d’état:

“Ever since the Civil War Congress has allowed the bankers to control financial legislation. The membership of the Finance Committee in the Senate (now the Banking and Currency Committee) and the Committee on Banking and Currency in the House have been made up chiefly of bankers, their agents, and their attorneys. These committees have controlled the nature of bills to be reported, the extent of them, and the debates that were to be held on them when they were being considered in the Senate and the House.” (Lindbergh).

Why is Your Country at War?

In 1917 Lindbergh wrote a widely read pamphlet, Why is Your Country at War?, in which he laid the blame at the door of “high finance” for America’s involvement in what came to be known as World War I. For his courage and accurate expose of the role of the Money Trust in leading America into the war, the press, controlled by Wall Street, labeled Lindbergh a traitor. His political career was destroyed by the Money Trust he had fought.

One international Wall Street bank, J. P. Morgan & Co., in violation of US neutrality, became the banker to Britain and France at the outset of the war in Europe and, through its influence on Woodrow Wilson’s administration, was able to manipulate the media accounts of events to create a war fever in an unknowing American populace that had been deeply skeptical of the need to go to war.

Between the creation of the First Bank of the United States by Treasury Secretary Hamilton in 1791 as a private bank, and the creation of the Federal Reserve in December 1913—also a privately-owned central bank—a small group of extremely wealthy families had emerged, earlier referred to as America’s Sixty Families.

The wealth and power of these families were tied to their ability to control the money of the new nation, to create shortages of money at will, leading to panics and even depressions, in order to expand and consolidate their power over the nation. It was they who financed wars and the expansion of the United States beyond its borders when, after the Spanish-American War of 1898, America became a de facto imperial power by annexing the Philippines as a gateway to the lucrative trade of China and Asia.

In the period from the outbreak of the “war to make the world safe for democracy” in August 1914, until the end of the Second World War in May 1945— contrary to the claims of standard and ‘approved’ history texts—the world underwent a titanic struggle between two world powers, the United States and Germany, over which would succeed the failing British Empire as global hegemon.

Since 1945 American hegemony, or more accurately an American imperium, has rested on two firm pillars of support. The first pillar has been the role of the dollar as unchallenged world reserve currency in which New York’s Wall Street is the center of global finance, the “banker to the world.” The second and complementary pillar has been the role of the Pentagon and the unchallenged dominance of American military power.

What is poorly understood is how the two pillars fit together seamlessly within one and the same power structure, a power structure that is driven by the money interests. It is driven above all by Wall Street and the special breed of international bankers who institutionalized their rule in organizations such as the Pilgrims Society, the Council on Foreign Relations, the Bilderberg Meetings, the Trilateral Commission and other private and select organs of their control.

The crisis which broke in summer of 2007, initially around the securitization of high-risk “sub-prime” home mortgages has rocked the foundations of the financial system as no other crisis in history to date. For those wishing to understand how the same Wall Street banks that caused the crisis through their unfettered greed and drive for ever greater control over the world, emerged—at taxpayer expense—even more profitable. The book “Gods of Money” by William Engdahl provides an introduction into the inner-workings of the money power.

No normal book on finance.

This is no normal book on finance. It details the intimate synergies between American military power and the financial means of Wall Street and Washington to create the most extensive global empire since the fall of the British Empire a century ago.

It traces the rise of America from the 1800s to the hegemonic global superpower on the ashes of the British Empire by the end of the Second World War. Here’s some of what you will learn:

This book is no ordinary book about money and finance. Rather it traces the history of money as an instrument of power; it traces the evolution of that power in the hands of a tiny elite that regards themselves as, quite literally, gods – The Gods of Money. How these gods abused their power and how they systematically set out to control the entire world is the subject.