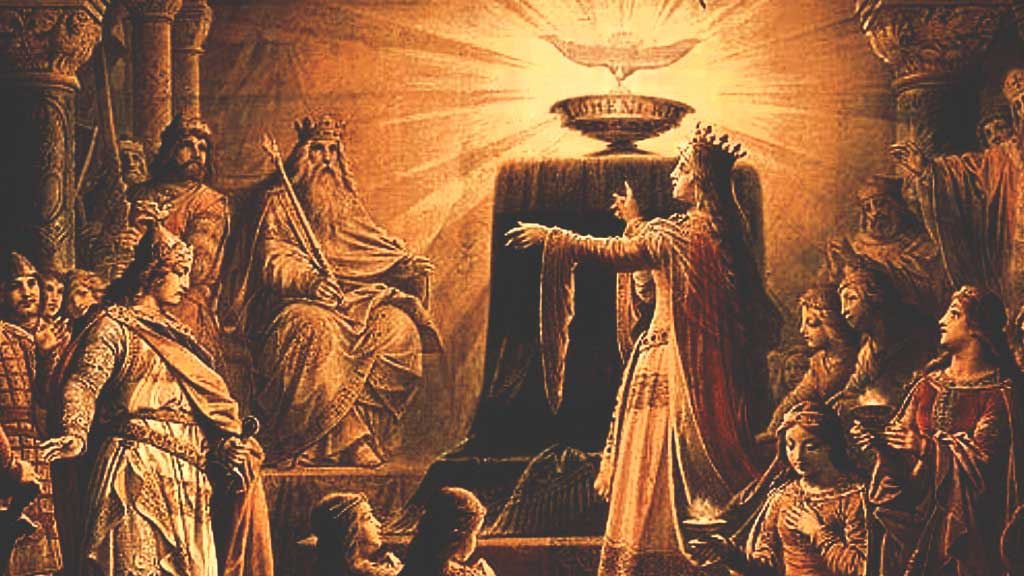 In the early 1180s, as the shadow of Saladin lengthened over the Holy Land, a nobleman with Merovingian ancestry, Philip d’Alsace, count of Flanders, commissioned the greatest poet of the age, Chrétien de Troyes, to do a French reworking of a strange tale about a poor knight, the son of a widow, who attains the kingship of the Holy Grail.

Philip supposedly found the tale in an ancient Celtic/Germanic chronicle, and wanted Chrétien, the medieval version of a best-selling author, to make it a hit. Chrétien labored over this strange story, sometimes giving its symbolic events a sort of numinous and dreamlike quality and at other times obviously failing to grasp the importance and even the meaning of his source material.

Nonetheless, as Jerusalem fell and the Christian kingdoms of Outremer (Crusader states in Asia Minor and Palestine) shrank to a few coastal enclaves, poets in noble courts across Europe took up the story of Chrétien’s Grail. Chrétien himself never completed his work, leaving the long poem unfinished at his death. Several poets tried to continue the story, with varying degrees of success. Even more important, other writers took up the theme, as if from a common source, and expanded upon it.

The son of the Widow Lady

Robert de Boron, writing between 1190 and 1199, Christianized the Grail story. He tells us that the source of his story, in its Christian form, is a great book, the secrets of which have been revealed to him. Robert, unlike Chrétien, is quite sure what the Grail is all about.

The Grail is the cup of the Last Supper in which Joseph of Arimathea collected Jesus’ blood at the Crucifixion. After the Crucifixion, Joseph’s family became the keepers of the Grail. The adventures of the Grail romances involve the members of this family, and in the end the Grail comes to England with Joseph’s brother-in-law, Brons the Fisher-King. As in Chrétien’s version, Perceval is called “the Son of the Widow Lady,” but Robert also describes him as a descendant of Joseph of Arimathea.

We must keep in mind that at this same period, the Order of Our Lady of Zion was in the process of relocating its power base to Europe. Supported by the powerful Cistercians, by 1178, ten years before the schism between the Templars and the older order, Zion was well established in Europe.

A papal bull from Alexander III grants the order possession of chapters in Picardy, France, Lombardy, Calabria, Sicily, Spain, and the Holy Lands. After the loss of Jerusalem, the Order cut loose the Templars and embarked on a new program. The Grail romances can be seen as part of this new plan.

The histories collected through two centuries of patient work by Sylvester’s chroniclers suddenly appeared as the content of a new kind of popular mythology, one nicely geared to the knightly aspirations of the crusading era. The source, as both Chrétien and Robert de Boron inform us, is a secret book in the possession of certain nobles connected with the Merovingians and the Order of Zion. 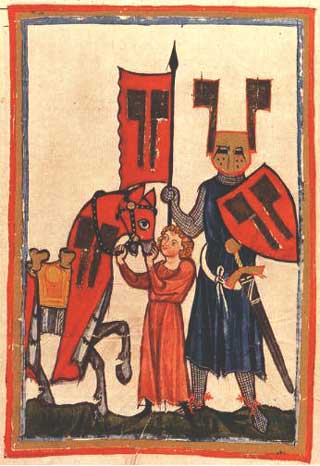 The most significant of all the Grail romances is the Parzival of Wolfram von Eschenbach, written between 1200 and 1215. Wolfram minces no words in calling the keepers of the Grail Templars, and then goes to the heart of the mystery by describing the Grail as a miraculous stone. This “lapsit exillis,” a green-language pun that suggests the exiled stone of Matthew, as well as the stone that fell from heaven and even the “lapsit elixir” of the alchemical philosopher’s stone, has miraculous powers, including healing, nourishment, and the ability to communicate its wishes.

Wolfram claimed to have learned his tale from one Guyot, or Kyot, of Provence, who in turn learned it from a recovered manuscript from Toledo, in Muslim Spain. This source, according to Wolfram, is the manuscript of Flegetanis, a heathen astronomer living roughly at the time of the Exodus from Egypt, or about 1,200 years before the birth of Christ. Flegetanis, whose name is simply the Persian phrase “familiar with the stars,” claimed to read the “name” of the Grail in the stars and thereby understood the workings of destiny. Parzival is a masterpiece of alchemical literature.

After 1210, as the persecution of Cathar heretics in the south of France increased into a crusade, the Grail romances began to fade from favor. The Church never challenged them directly, which is indeed curious, but by the middle of the thirteenth century, their imagery and symbolism had faded from literature and politics, only to be permanently engraved in stone on the porches and naves of the newly constructed Gothic cathedrals. Indeed, one of the magnificent Gothic statues at Chartres Cathedral depicts Melchizedek, the king of Ur and Salem who converted Abraham to monotheism, holding the chalice of the Grail. This symbolic image suggests that a deep understanding of the Grail legend remained, at least among the builders of the church itself.